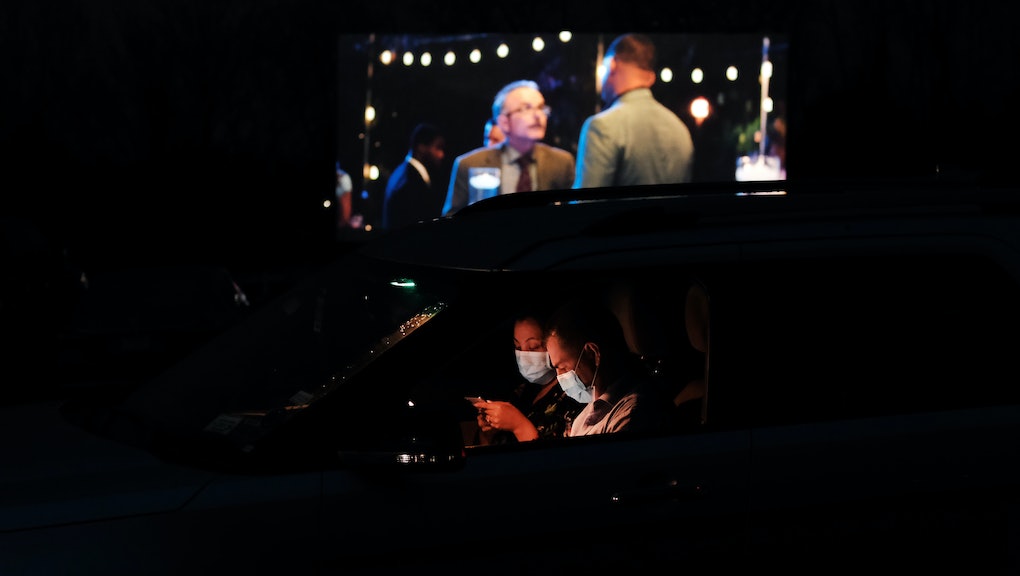 Drive-in movie theaters are having a moment. With many states loosening stay-at-home restrictions and indoor cinemas still probably months away from safely reopening, drive-ins are suddenly the hottest way to catch a film that doesn’t involve queueing up Netflix from your couch.

At the height of quarantine, a drive-in theater in Ocala, Florida, was the only cinema in the country showing a new release film. “[We’re] kind of like the last dinosaur standing, you know?” John Watzke, owner-operator of the Ocala Drive-In, told NPR. His theater propelled IFC’s arthouse horror flick Swallow to number one on the box office charts in mid-April — with a paltry $1,710 in ticket sales.

But lots of other drive-ins have reopened in recent weeks, and business is booming. The Aut-O-Rama in North Ridgeville, Ohio, was sold-out on Saturday night, May 16, with cars lined up outside to nab a choice spot at the family-owned drive-in that’s been around since 1965.

"I think it’s pretty cool. I’m pretty sure everybody has been cooped up in their house,” Logal Rivette, of Medina, Ohio, told Spectrum News 1 Ohio. “You can tell the line out the entrance was all the way into the street, because we are all sick of just being in our house watching TV, and it’s just cool to get out and leave the living room.”

Similarly, folks have flocked to the Family Drive-In Theatre in Stephens City, Virginia. “People are seeing it as a safe environment, a safe way to come out to see the movie,” manager James Kopp told CNN. “The American drive-in theater rides again.”

The resurgence of drive-ins makes a lot of practical sense in these topsy-turvy times. Social distancing is built into the concept. Even New York Governor Andrew Cuomo, an aggressive advocate of strident stay-at-home guidelines, didn’t see the logic of putting drive-ins out of business. "Where is the public safety issue? It's a drive-in theater. You're in the car with the same people," Cuomo told reporters in April.

New York eased restrictions on some low-risk activities last week, clearing the way for drive-ins around the state to open starting May 15. So many people flocked to the Warwick Drive-In on Friday that its staff had to turn folks away. “We sold out. People were just so happy to be outside,” theater owner Beth Wilson told the New York Times.

Most theaters have implemented additional safety measures to keep audiences healthy. At the Warwick Drive-In, masks were required outside of vehicles and customers had to stand six feet apart at the snack bar. Condiments came in individual packets to limit the spread of germs, too.

The fact that drive-ins are suddenly in vogue is pretty ironic, however, considering how hard it’s been for many of them to stay in business through the decades. Drive-ins became popular in the US in the 1950s and ‘60s as an alternative to stuffy indoor theaters, but they fell out of fashion as cinemas got cushier and more high-tech. At the industry’s peak in 1958, there were 4,063 drive-in screens across the country. By 1999, that number had fallen to 447 theaters and 684 screens. Today there are just 305 drive-ins with a total of 549 screens in America, according to the United Drive-In Theatre Owners Association.

A few months ago, drive-in movie theaters were a retro novelty. But quarantine is forcing people into a lot of behaviors that’d be otherwise weird in normal times, like hugging your grandma through a plastic shower curtain. Studios have largely postponed planned releases or pushed content straight to streaming. Drive-ins are the only way to see a movie on the big screen right now, and analysts are pointing to their popularity as proof that streaming hasn’t killed off traditional moviegoing yet.

“If you need evidence that the big screen communal moviegoing experience remains appealing to audiences, you need look no further than the excitement surrounding drive-in theaters,” Paul Dergarabedian, senior media analyst with Comscore, told Variety. “Movie lovers are rediscovering a pastime of a bygone era that now, in the age of COVID-19 is particularly relevant, essential and yes, modern.”

Governor Cuomo put things more simply when he announced drive-ins could reopen in New York state last week. “Talk about going back to the future,” Cuomo said with a smile, “back to drive-in movie theaters.”