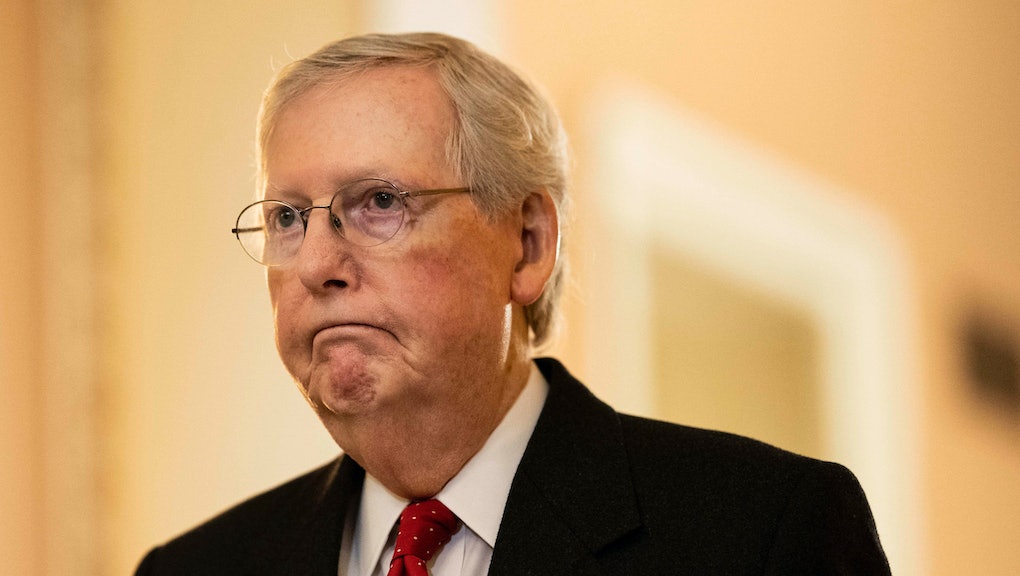 Brace yourselves for a whole lot of moaning about "divisiveness"

Republicans are in something of a predicament these days. The party willingly hitched its wagon to a horse that, in addition to being loose in a hospital, has managed to drag the GOP firmly out of the White House and decidedly, albeit narrowly, into the congressional minority as well. And now, out of power and stuck with an ex-president who would just as readily blow them up as he would help them out, Republicans are stuck navigating their way through a Scylla and Charybdis of their own making.

There are Republicans — the Matt Gaetzes and Marjorie Taylor Greenes of the caucus — who see the way forward as a wholehearted embrace of, if not Trump himself, at least his legacy, and the sizable MAGA base that comes with it. Others — your Mitt Romneys and Mitch McConnells and the like — believe the best thing they can do for the party is to treat Trump as an aberration and try to put him in their rearview mirrors as quickly as possible without pissing off his base too much.

There's no "right" answer here. And like all things Trump, the GOP is damned if they do, and damned if they don't. With that in mind, get ready for four years of bad-faith Republican attacks on Democrats for irrevocably dividing the country, simply by not being Republicans. In fact, it's already begun.

A review in name only with predetermined results, which ultimately leads to a unilateral executive order enlarging the monuments’ boundaries, will not solve the root of the problem and will only deepen divisions in this country.

And here's Oklahoma Rep. Tom Cole (R), arguing on the House floor against impeaching Trump in the first place (emphasis? Still mine):

I can think of no action the House can take that is more likely to further divide the American people than the action we are contemplating today. Emotions are clearly running high, and political divisions have never been more apparent in my lifetime. We desperately need to seek a path toward healing for the American people.

Is Republican National Committee Chairwoman Ronna McDaniel getting in on the action? You'd better believe it.

Starting to sense a theme here?

In terms of craven political triangulation, the move to frame the Democrats, and particularly Biden — one of the party's more underwhelming, capital-C Conservative members — as the source of division in this country is a fairly shrewd move for Republicans. For the "embrace MAGA" wing of the party, it allows them to take a page out of Trump's playbook and accuse their opposition of the very thing they, themselves are guilty of — a tried and true tactic that's already proven effective at duping the president's base. And for the "let's try to forget this ever happened" Republicans, suddenly positioning themselves as the party of unity (despite Biden having already staked his entire campaign, and now his presidency, on that very theme) is a way to reinforce their aspirational goal of never having to seriously talk about Donald Trump again.

Of course, in both cases, it's total bullshit. Biden's platitudes about "unity" aside, does anyone really think after four years of Trump's xenophobic bigotry and self-serving grifts that the Democrats are suddenly the ones pulling the country apart? Instead, it's best to see this emerging trope as the transparent ploy that it is: a ham-fisted attempt to take the high road, or at least appear to take the high road, while still clinging to the last remaining ethos that can unify the Republican Party, namely power at all costs. Consider that while the GOP's pearl-clutching intensifies, McConnell, the newly demoted Senate minority leader, is working to hamstring the power that comes with the Democrats' newfound majority status.

Dishonesty and hypocrisy in politics? Shocking, I know. But the national psyche has been so pummeled and traumatized and scrambled over the past four years, it can be easy to be lulled into a false sense of normalcy now that things appear to have calmed down a bit. Don't believe it. Don't accept it. But brace yourself to hear a whole lot of lip service against "division" for the next few years.

More like this
It appears once again that the Democrats are willing to tank their whole agenda because of "rules"
By Rafi Schwartz
I never want Tucker Carlson to stop talking about Nicki Minaj's cousin's friend's enormous balls
By Rafi Schwartz
Oops, the Arizona recount the MAGA crew demanded actually took votes away from Trump
By Rafi Schwartz
Stay up to date