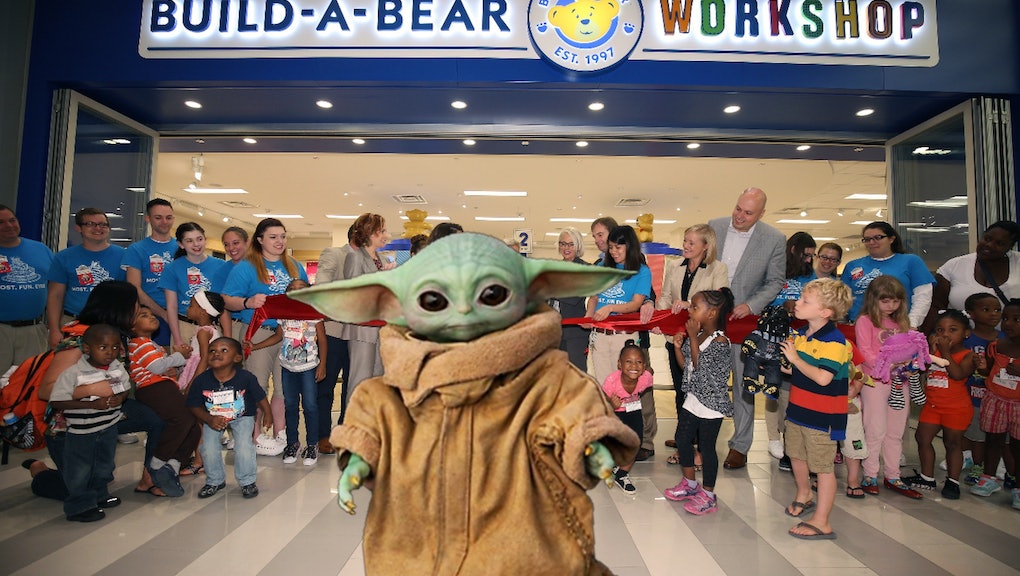 Can Baby Yoda save Build-A-Bear?

I remember when the very first Build-A-Bear Workshop opened, at a semi-fancy mall in St. Louis (where I grew up) in 1997. Can you imagine anything more magical than a kid-friendly factory where you got to customize and construct your own teddy bear? Yeah, it was a mega-hit. I remember going to quite-a-few birthday parties at Build-A-Bear over the years. Next to an American Girl doll, it was the ultimate status toy.

The mega-popularity of Build-A-Bear paid off financially. The company secured a $5 million investment and expanded to 14 stores in major cities in 1999; it went public in 2004.

Build-A-Bear stock hit an all-time high on January 26, 2005, with a closing price of $36.90. But lately, the novelty of a build-your-own stuffed animal chain has worn off — especially as brick-and-mortar retail has struggled in general, amid the rise of Amazon and digital commerce.

But Build-A-Bear’s fortunes may be about to improve, and it’s all thanks to a tiny green creature the universe fell in love with last November: Baby Yoda.

"I'm excited to share we will be one of the first companies to provide the digital and internet phenomenon who is trending higher than all the presidential candidates combined," Build-A-Bear CEO Sharon Price John said at the ICR Conference in Orlando, Florida.

"We now will have The Child, also known as Baby Yoda," she added, holding up a prototype plush — which looked extremely cute for the record, based on a grainy photo snapped by Business Insider on Tuesday. Shares of Build-A-Bear stock skyrocketed 15% on Tuesday after the announcement.

Disney is currently conquering the streaming wars with its impressive arsenal of intellectual property, and it seems high-profile partnerships with the likes of the Mouse could help boon Build-A-Bear’s future. Business Insider reported that companies like Disney and Lucasfilm are increasingly crucial to the retailer’s business, as customers seek out beloved characters in stuffed-animal form. But sales of Frozen 2 merchandise were disappointing over the holiday season, which added to Build-A-Bear’s financial woes.

So here’s hoping Baby Yoda, when he debuts at Build-A-Bear in a few months, can help rescue the retailer — just like The Mandalorian’s Clan of Two will undoubtedly save some galaxy far, far away in the show’s next season. May the Force be with you, Build-A-Bear. Always.