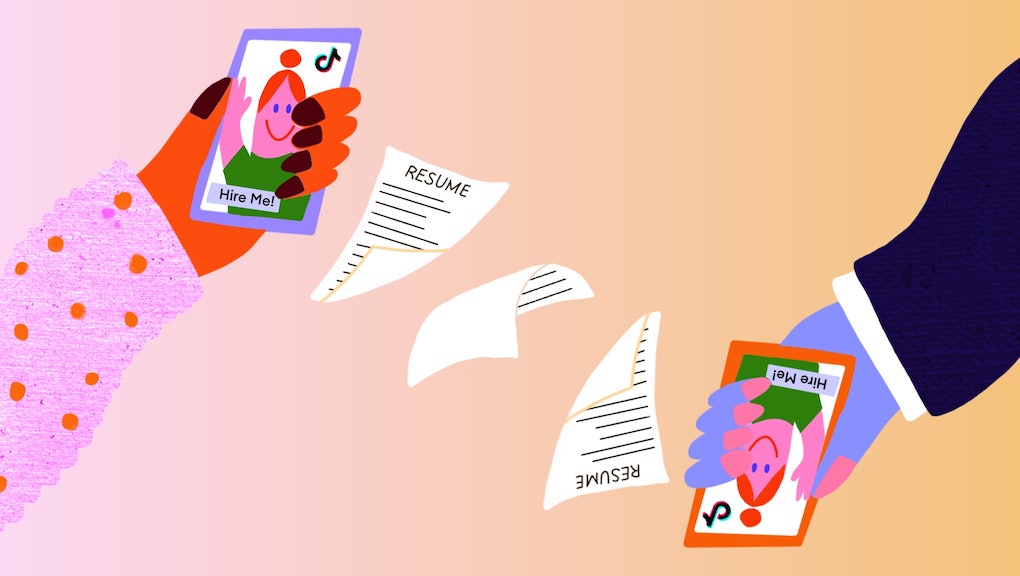 Trying to find a job is its own special kind of hell. Sending out your résumé and cover letter to potential employers takes so much time and emotional energy and because some don’t even bother to reply, it often feels like you're just sending things into the void. And in true TikTok form, TikTok wants to save us from this.

TikTok is bubbling with young, talented people and that talent is ripe for the corporate picking. So last week, the company introduced a feature called TikTok Resumes that lets you apply to jobs right through the app. This seems like a decidedly more fun way to do the job search shuffle, but is it a gimmick or could it actually help people get jobs? I asked a career expert how we can use an app best known for (sometimes culturally appropriated) dance choreography and skincare hacks to expand our professional horizons.

First things first, this feature is for a very specific demographic: People who want to share their entire vibe rather than a few key work accomplishments. “A lot of people struggle with the limitations of a 1-2-page résumé,” says Chelsey Opare-Addo, a recruiter and résumé coach in Chicago. “Candidates have a hard time showing their personality and professional brand, and end up sounding like everyone else.” TikTok Resumes, then, can be a helpful tool for someone who feels like their flair can’t actually be captured on paper.

TikTok Resumes is still in beta testing right now, so the in-app feature is currently only being used by a few companies to hire right now. The companies themselves are big — PopSugar, Abercrombie & Fitch, and Chipotle to name a few — but a lot of the jobs that are being listed are for entry- and mid-level positions, not high level executive gigs. So if you’re already established in your career and your career is not specifically in social media, making posting your résumé on TikTok may not be that helpful.

TikTok’s new job feature will probably not be the most effective way to apply for technical roles, says Opare-Addo. “Personality tends to be less relevant in highly specialized roles, like engineering,” she explains. You can probably see how an Elle Woods-esque resu-meme might not be the best medium for highlighting your mathematical prowess. And, it might go without saying, but making a video résumé is not the best choice for someone who is not comfortable on video or, well, terribly awkward on video.

The new feature also may be problematic for marginalized people. “TikTok Resumes could also pose a challenge for people of color, certain religious groups, individuals with accents, older professionals, and those with disabilities,” says Odare-Addo. This is a messed up reality that we all need to heed: If something about an applicant is visibly “different,” that difference could work against them.

Sure, most reputable companies have DEI programs in place at this point, but studies show that discrimination in hiring practices is still fully operational. Opare-Addo fears that social media-based recruiting may leave a lot of room for unconscious bias to creep in. Opare-Addo has both personal and professional experience dealing with bias, and she doesn’t seem convinced that video résumés are a great option for folks from historically underestimated communities because the format ensures that a person’s appearance — instead of their credentials — will be the first thing a potential employer sees about them.

People who are part of groups that are frequently discriminated against should be aware of the pitfalls of video résumés. “Individuals who belong to these groups tend to create their résumé in a way that masks their affiliation to that particular group,” explains Odare-Addo. “As a résumé writer and Black woman, I've had clients ask if they should include the sororities, fraternities or non-profit affiliations that may identify them as Black.” That’s a very ugly, but sadly reality-based strategy that many BIPOC and other Others are forced to employ if they want to be employed.

“Studies have shown that individuals with white-sounding names receive more callbacks than individuals with Black-sounding names. Therefore, people tend to ‘whitewash’ their resumes. It will prove impossible to employ this strategy with a TikTok resume,” Odare-Addo says. Basically, while TikTok didn’t create our racist career reality, it still may play in propagating it by rendering a person’s accomplishments less visible than their appearance.

Innovations like TikTik Resumes feel inevitable, but if they seem intimidating or exclusionary to you, you don' have to subscribe. Odare-Appo predicts that traditional résumés aren't going anywhere, and that's a good thing. “Résumés get a bad rap for being boring, but it doesn't have to be that way,” she says. In other words, you can add color and spice to your résumé without meme-ifying it or oversharing. The Elle Woods approach to applications may work for some, but it is fiction after all.

More like this
How to not be a jerk as restaurants reopen, according to servers
By Tracey Anne Duncan
Wanting to start a family motivated us to pay off $126K in a year
By Marianne Eloise
Can't bear to be in a relationship right now? Blame de-cuffing season
By Suzannah Weiss
Stay up to date