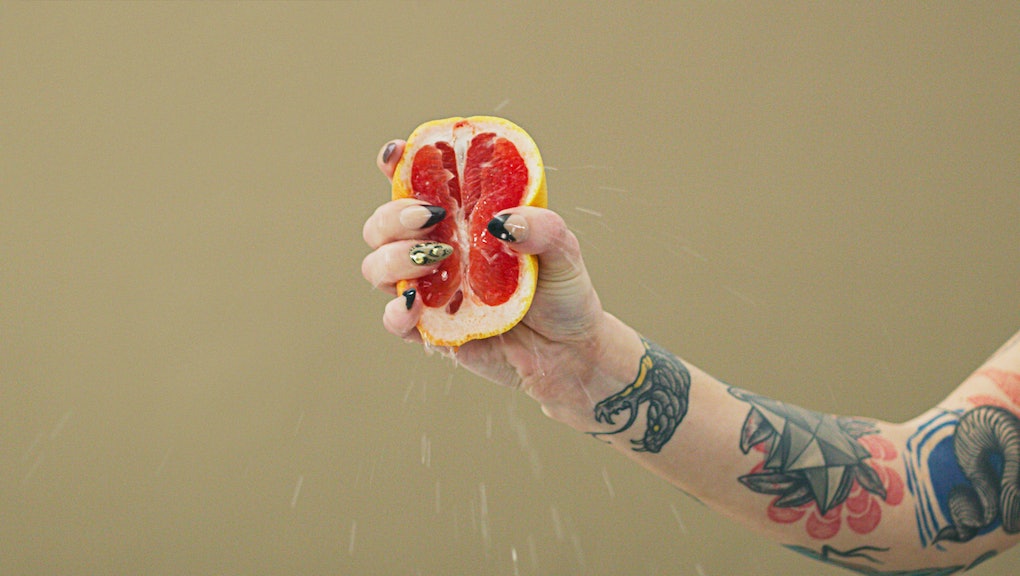 Can you change the taste of your bodily fluids?

I've always had a deep aversion to pudding. My palette generally rejects anything with a viscous mouthfeel. Even looking at a bowl of oatmeal, flan, or cream of wheat turns my stomach. So you can only imagine my trepidation when I grew up into the gay man I am and went down on another man for the first time. Luckily, that didn’t end badly at all, but admittedly, I liked everything but the big finish — for all the reasons above. To add to my texture issues, I learned that body fluid has salty flavor unto itself; and though it isn’t exactly bad, it’s certainly an acquired taste. I wondered, as a NuGay, if I would just need to get used to it to enjoy a healthy sex life, since you can’t change the way body fluid tastes, can you?

Well, it’s complicated. First, in order to understand why our body fluid tastes the way it does, we first need to know what it’s made of.

For penis-havers, ejaculate is a greyish-white to yellowish combination of sperm, secretions from the prostate, and secretions from the seminal vesicles, which are found in the pelvis. The sperm are there for procreation, says Justin Houman, a Los Angeles-based urologist. There are proteins, citric acid, fructose, vitamins, minerals, alkaline fluids, and various enzymes from the prostate and seminal vesicles which are there to support sperm's goal of procreation by providing energy and protection to help the sperm survive in the female reproductive tract, he tells me.

As for taste, it varies from person to person. “Some will experience it as a sweet taste, due to the high fructose content, others describe it as a metallic taste to the vitamins and minerals within it, while others will describe it as a bitter or salty taste due to it being an alkaline fluid,” Houman says. Ejaculate is mostly glandular secretions and only 2% of it is made up of actual sperm, so for those who have tasted it, most of what you’re getting is the pool — not the swimmers themselves.

We tend to think sexual organs are so dissimilar, and they are of course, but the fluids that vaginas produce do have a few similarities with penises. “Vaginal fluid is made up of water-like fluid called transudate, healthy bacteria, secretions from the cervix and vaginal gland, and cells from the vaginal walls which contain stored sugar,” says Veronica M. Alvarez-Galiana, a Florida-based OB/GYN and medical director of obstetrics and gynecology. A healthy person can produce up to a quarter teaspoon of vaginal fluid within 24 hours — much less than the teaspoon or more of ejaculate a penis produces. Just to say it, we’re not talking about female ejaculation, simply the typical fluid one might experience while performing a bit of cunnilingus.

Alvarez-Galiana adds that vaginal fluid can range from clear to white or light yellow and the texture can range from watery thin to slightly thick, depending on the stage of the vagina’s cycle. “Vaginal fluid should not be thick like cottage cheese, however, because that may indicate the presence of a yeast infection,” she warns.

Admittedly, I have zero experience with the taste of vaginal fluid, but like penis-havers, every if vagina is different and may have their own smell and taste, Alvarez-Galiana tells me. “Because the vagina is naturally an acidic environment, the fluid taste may reflect this. However, one must watch out for a strong fishy odor or other foul smells like stool, as this is not typical,” she says, adding that worse smells could indicate the presence of a bacterial infection, or other concerning medical conditions, including cancer (although that’s rare).

So, if you don’t particularly like the taste of yourself or your current partner, what is there to do? There are plenty of rumors swirling around the internet suggesting ways to change the taste of va-jay-jays and spunk, including hypothetical tweets on social media, one very famous Rick Ross track, and even some unproven supplements like Sugar Cum and My Sweet V. These products claim that you can change the taste of your own body fluid with one simple pill, but most doctors agree that you can’t really change the flavor of body fluid much. What you can change adversely, however, is the pH levels in your body. For instance, for vagina-havers, there are many products that claim to clean and maintain your vagina, but using the wrong product could throw your pH balance out of whack and you run the risk of getting an infection that way. Vaginas are self-cleaning and to convince you otherwise is an archaic and offensive tool of the patriarchy

“Since vaginal fluid is made up of water from cells and the other components previously mentioned, only the water and some of the stored sugar from those foods and liquids would reach the vagina. Any food or liquid that’s consumed would be broken down in the intestinal tract,” Alvarez-Galiana explains. “Garlic and asparagus have been shown to change the smell of urine, which may contribute to changes in the smell of the vagina, but only theoretically because the urethra is embedded within the vulva.”

The same goes for penis-havers, who urinate and ejaculate from the same equipment. This is why garlic and asparagus is easier to mistake for changing the taste of semen, since th ose foods change urine so drastically. “There is no conclusive evidence supporting that food changes the taste of ejaculate,” Houman continues, adding that some rumors that eating fruits such as oranges and pineapples can help improve the taste of semen, likely because acidic foods would lower the pH in your body, and therefore the bleach-like quality your jizz holds. Also, a 2016 European Urology study also found that smokers change the quality of their ejaculate for the worse, lowering sperm count and motility, which also can have an effect on what ejaculate tastes like. So, Rick, you might want to put down the cigar if you want your baby to truly taste the best.

Both doctors stated that the health of the person affects the fluids that person produces no matter what organs you have, so keeping your body in the best shape you can helps you taste the best it can. Finally, if you’re putting a penis or a vagina on your menu tonight, expect to taste like it’s supposed to — a penis or a vagina. If you’re not up for that, maybe bake a pie.

This article was originally published on Aug. 5, 2020