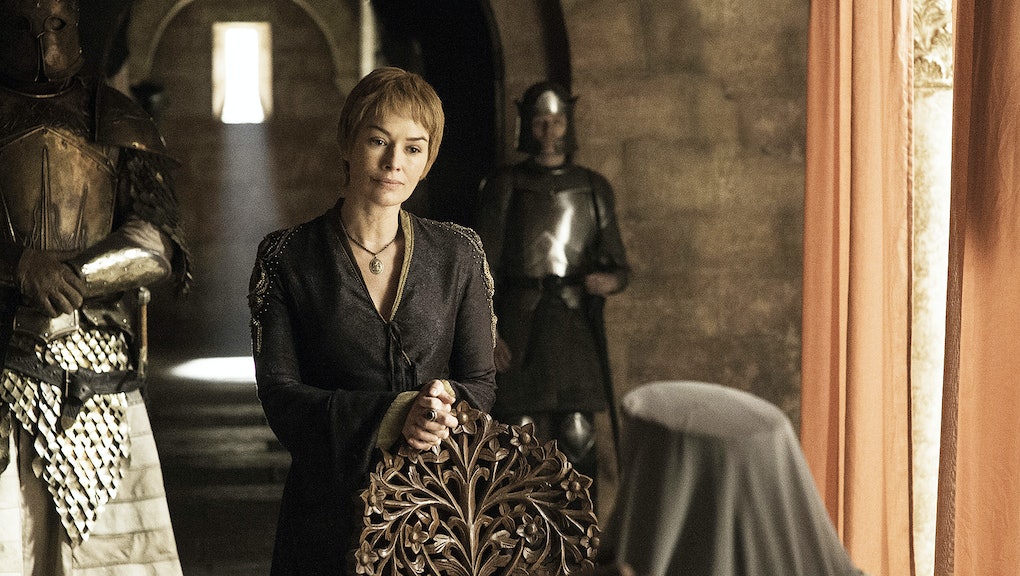 Cersei's 'Game of Thrones' death was disappointing for actor Lena Headey, too

Spoilers for Game of Thrones Season 8 ahead. After eight seasons of creating chaos throughout Westeros and committing unspeakably cruel acts, Cersei Lannister dying under a pile of rubble in the Game of Thrones series finale felt like a disappointment for many fans — including, apparently, the actor who played her. In an interview with The Guardian published on Sunday, June 17, Lena Headey revealed that she also felt the Queen of King's Landing deserved a better ending than collapsing in the arms of her lover-slash-twin brother.

“I will say, I wanted a better death,” Headey told the outlet, adding, “Obviously, you dream of your death. You could go in any way on that show. So I was kind of gutted."

As a viewer of Thrones herself, the actor explained, she felt "invested" in the show, and had her own "favorite characters", presumably including Cersei. As such, it's no wonder she wasn't thrilled with the iconic queen's quiet and mostly off-camera ending, or perhaps other choices made on the show, as well. "I’ve got a few of my own gripes," Headey told The Guardian.

However, the actor explained that although she may be less than satisfied with Cersei's demise, she hasn't approached Thrones' showrunners and writers with her complaints. "I haven’t sat down drunkly with David [Benioff] and Dan [Weiss] yet," she said.

And like many Thrones fans displeased with the series' final season, Headey does understand that Benioff and Weiss were under a lot of pressure to get things right. "I just think they couldn’t have pleased everyone," she said. "No matter what they did, I think there was going to be some big comedown from the climb.”

This is not the first time that Headey has expressed disappointment over her character's exit. On May 12, just one day after Thrones' series finale premiered, Headey told Entertainment Weekly that she had a "mixed" reaction to Cersei's death.

“I wanted her to have some big piece or fight with somebody,” she said. In both the Guardian interview and the EW interview, Headey explained that she eventually came more on-board the ending after talking with co-star Nikolaj Coster-Waldau, who plays Jaime Lannister, and with Weiss and Benioff. “The more we talked about it, the more it seemed like the perfect end for her,” Headey told EW, adding that Cersei dying alongside Jaime showed how the duo "came into the world together and now they leave together.”

Even so, Headey is far from the only member of the Thrones cast who wasn't immediately — or ever — pleased with the show's finale. During an interview with Entertainment Tonight back in September (seen below), Emilia Clarke, who played Daenerys Targaryen, had a memorable reaction when asked how she felt about the conclusion of the series. "Have you shot your final scenes yet, and are you happy with how things ended?" the interviewer asked, to which Clarke scrunched her face up and let out a single "ha ha" in response.

Given the underwhelming nature of Daenerys' death — which many viewers loudly criticized — many people assumed that Clarke's response implied that she wasn't happy with Dany getting stabbed by Jon Snow, although it's unclear if that's truly what the actor meant.

Additionally, the actor who played Thrones' spymaster Varys, Conleth Hill, revealed his own disappointment with his character's death by dragon fire in a May interview with EW. "It was kind of frustrating," Hill told the outlet. "As a whole it’s been overwhelmingly positive and brilliant, but I suppose the last couple seasons weren’t my favorite.”

Now that some time has passed since the series ended, there'll likely be even more cast confessionals about Thrones' final season coming our way. It seems like the show's actors and fans alike are spending these post-Thrones months imagining better, more worthy deaths for all our favorite characters from the seven realms.

More like this
Steve from 'Blue's Clues' gave us the closure we didn't know we needed
By Kara Weisenstein
Even in death, Michael K Williams was, and still is, Brooklyn for life
By Keith Nelson Jr.
The 8 best reality shows you're not watching, but should be
By Brandon Yu
Stay up to date