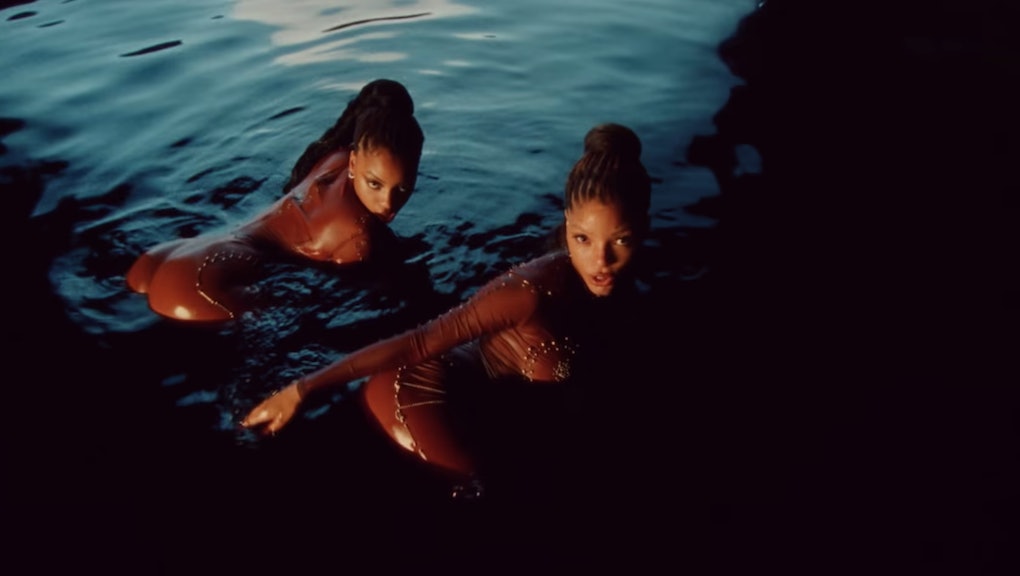 The pandemic forced musicians of all stripes to get very creative in the last year, but none have navigated lockdown quite like sister R&B duo Chloe x Halle. In normal times, awards shows and talk shows would’ve invited them to perform in-studio to promote their sultry and sugar-coated 2020 album Ungodly Hour. Obviously, coronavirus threw a wrench in plans, but the sisters were among the first musicians to turn lemons into lemonade, taping playful performances from their tennis court.

Chloe x Halle continued their parade of slick content produced for viewers at home by debuting the music video for their title track, “Ungodly Hour,” on The Tonight Show Starring Jimmy Fallon on Wednesday night. The visuals are stunning and otherworldly, with the sisters clad in blue latex bodysuits at one point, resembling androids being charged-up in a lab. In another shot, they shimmer in silver sheath dresses like glamorous phosphorescent plankton. Every couture look is like a dreamscape.

“Ungodly Hour” is a welcome and timely choice for Chloe x Halle’s third official video from their latest album, and and it's especially nice to see Chloe Bailey getting back into the swing of things, after recently dealing with trolls and creeps, an ungodly hour of its own. The sisters define the term as those times in life when insecurities and negative feelings get overwhelming; by asking someone to love you then, you’re asking for unconditional love at your best and your worst.

With the pandemic, everyone’s sort of going through an extended “ungodly hour” experience, which the sisters acknowledge: “We feel like the title track of this album is really going with the times of what's happening right now,” Halle Bailey told NPR, “because truly this does feel like the ungodly hour and we just hope that our music can be a healer right now.”

More like this
You can feel for Khloé Kardashian and also recognize she's part of the problem
By Kara Weisenstein
DMX, the intense, gruff-voiced rap legend, has died at 50
By William E. Ketchum III
Queen Rihanna marched with the people against Asian hate this weekend
By Kara Weisenstein
Stay up to date