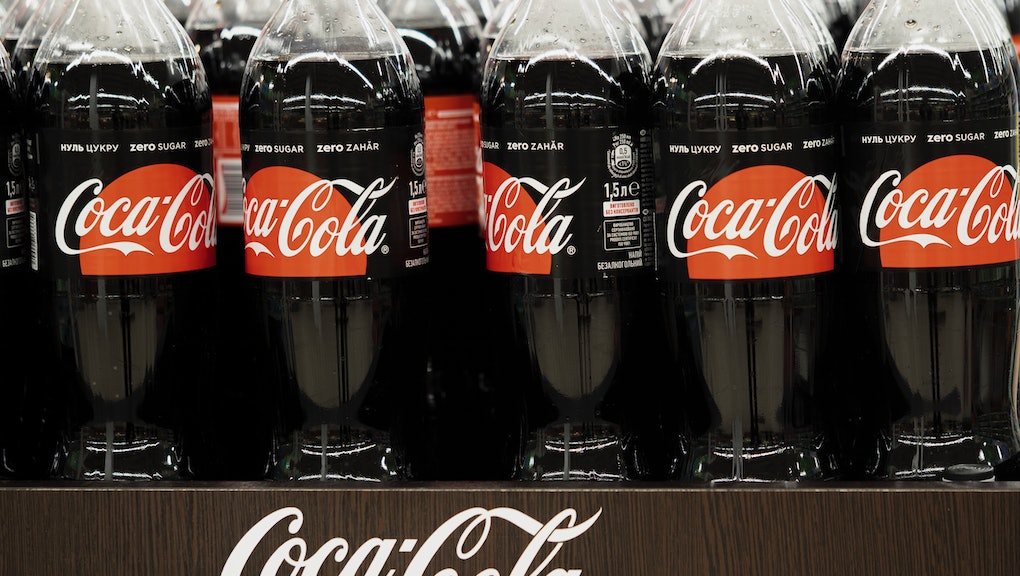 Coca-Cola is one of the biggest producers of single-use plastic in the world. While many corporations are starting to recognize their role in the degradation of the planet's health, Coca-Cola doesn't appear to be as serious about undoing its bad behaviors as some of its peers. In an interview with the BBC, senior vice president Beatriz Perez, said Coca-Cola will not get rid of its single-use plastic bottles. The reason: because consumers like them.

According to Coca-Cola, its bottles are still quite popular with people who appreciate the lightweight material and resealable caps. Not only that, but Perez told the BBC, "Business won't be in business if we don't accommodate consumers," which seems to suggest that because consumers are drinking out of the existing plastic bottles, the company is just going to keep giving it to them. And it's certainly giving them a lot of bottles: Coca-Cola produces about three million tons of plastic packaging each year — the equivalent of churning out about 200,000 bottles per minute. That's enough plastic to earn Coca-Cola the top spot as the world's worst plastic polluter, according to a report published by Break Free from Plastic — topping competitors Nestlé and PepsiCo, which took the second and third spot on the list.

Coca-Cola won't entirely be carrying on with its worst wasteful practices: it is pledging to ease recycled plastic into its supply chain and will use 50 percent recycled plastic by 2030. It also intends to collect and reuse the equivalent of every bottle and can that it sells during the same timeframe. But those goals fall short of completely eliminating plastic waste, and plastic Coca-Cola bottles will still end up in landfills. Plastic bottles are one of the biggest waste products occupying landfills — more than 60 million plastic bottles end up in landfills every single day, resulting in about 22 billion being tossed each year, according to the Container Recycling Institute. Much of that waste ends up in the ocean where it can do significant damage to delicate ecosystems. Some estimates suggest that by 2050 there will be more plastic than fish in the ocean. That plastic waste also has a significant tie to climate change, as everything from the production of the plastic to the discarding of it impact the environment.

Some companies have taken these developments more seriously. Starbucks, for instance, will have phased out plastic straws entirely by the end of 2020 and intends to cut all waste production in half by 2030. Nestlé is promising to use 100 percent recyclable packaging by 2025. Evian has said it will use entirely recycled plastic for its bottles by 2025 and will move production to carbon-neutral plants.

All of these plans make Coca-Cola's look considerably less ambitious, even though the company is responsible for considerably more plastic pollution than its competitors. Given that, it's worth noting that reports have shown Coca-Cola to be resistant to plastic recycling efforts. In 2019, The Intercept published leaked audio showed the company fighting against some plastic recycling efforts. While the company may hide behind consumer demand, it is increasingly clear that many consumers want non-plastic options. Coca-Cola could lead the movement to provide those materials — or it can drag is feet and undermine recycling efforts in order to preserve its bottom line. It appears that it may be choosing the latter.