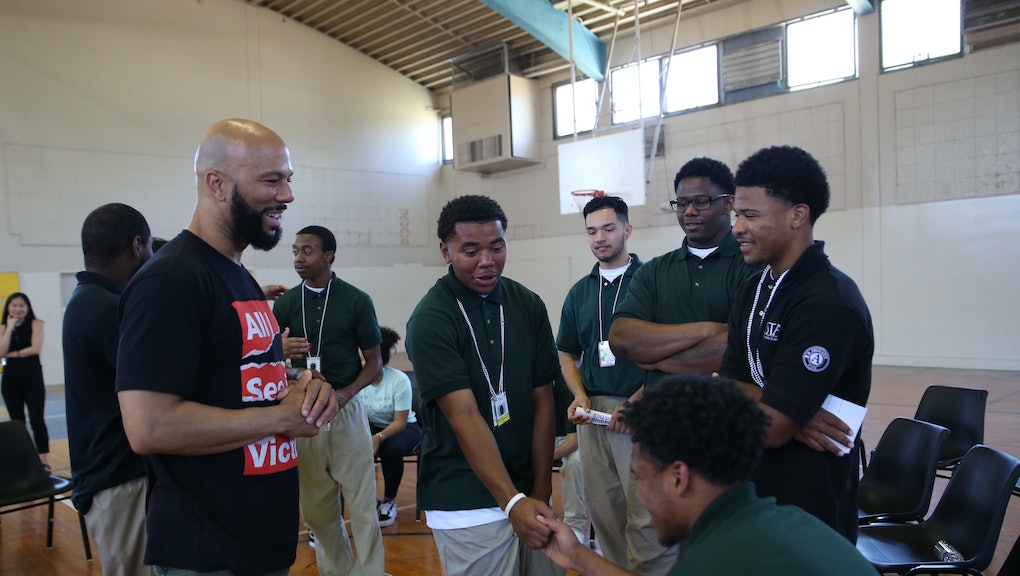 The rapper, who in recent years has become a leading celebrity advocate for incarcerated people, hosted a series of heartfelt conversations with young men at two different youth correctional facilities in Stockton.

The individuals ranged in age from 14 to 21 years old and are currently serving anywhere from several months to multiple years behind bars.

The young men described the challenges of prison life and opened up about their dreams and future career aspirations to Common, while also identifying a range of educational and job training programs they would like to see implemented in order to accelerate their path to recovery.

The prison visit marked the culmination of a busy weekend of activities in which the rapper toured Stockton and met with local activists and organizers in order to bring national attention to their work for change.

Stockton, situated in California’s Central Valley, is the largest U.S. city to ever file for bankruptcy and has been plagued in recent years by poverty, high crime rates, educational inequality and skyrocketing housing prices.

The city recently elected Michael Tubbs, 28, as its mayor, who has received praise nationwide for working closely with community leaders to rebuild. Tubbs is also implementing a host of cutting-edge social programs — including a universal basic income experiment — across the city.

On Saturday, Common joined Tubbs for a spirited conversation with a group of community organizers at City Hall.

The roundtable discussion, which touched on a range of topics including economic justice, criminal justice reform, and sustainability, featured the leaders of organizations working to revitalize the city, including Fathers & Families of San Joaquin, Gathering for Justice, Stockton Scholars, Rise Stockton, and the city’s Office of Violence Prevention.

“I come to communities and try to listen to see what we can contribute,” Common said during the gathering. “This is inspiring. You are showing the transformation on a holistic level. This is a good example of what a city, and hopefully a state and a nation, could be.”

Later that evening, Common also hosted a free concert at the city’s downtown civic auditorium, performing many of his most well-known songs in front of several hundred city residents.

Tubbs, the city’s first black mayor and currently the youngest mayor of a sizable American city, said he first met Common in 2012 while an undergraduate at Stanford University, and was immediately drawn to the rapper’s commitment to social justice and activism.

“I’m a big fan of the artist, but I’m a bigger fan of the man,” Tubbs told Mic. “He is someone who has a huge platform, who has a lot of influence, but is using it to speak truth about the things we need to fix and about injustice, but he’s doing it in the spirit of love.”

The two met once again in October of 2018, when Common toured the same juvenile detention facilities as part of a Hope & Redemption tour of multiple California jails. In a Mic profile at the time, Common said his prison visits were designed to help shatter myths about what it means to be incarcerated, and also offer hope to those behind bars.

The rapper, who has not been shy in his critique for President Trump on the national stage, said he walked away from his latest visit to Stockton impressed by Tubbs, calling him a model for Democratic politicians across the nation.

“Mayor Tubbs is one of the progressive leaders that more cities and states in the country need,” he told Mic. “He’s of the people. He really sits and listens and connects with communities and people from different walks of life.”

Common’s visit to Stockton comes on the heels of a several-month-long national book tour for Let Love Have the Last Word: A Memoir. The book details Common’s intimate and personal experiences with love, mindfulness, and self-care.

In an interview with Mic last month, Common said he hoped the book would inspire activists working on the front lines of social justice movements to invest in their mental and physical health. “The way you can truly be the best activist is to make sure that you are taking care of yourself in the process,” he said.

Common also recently announced that he’ll be releasing a new album later this summer, also titled, Let Love Have the Last Word, which will touch on many of the same themes as his memoir.