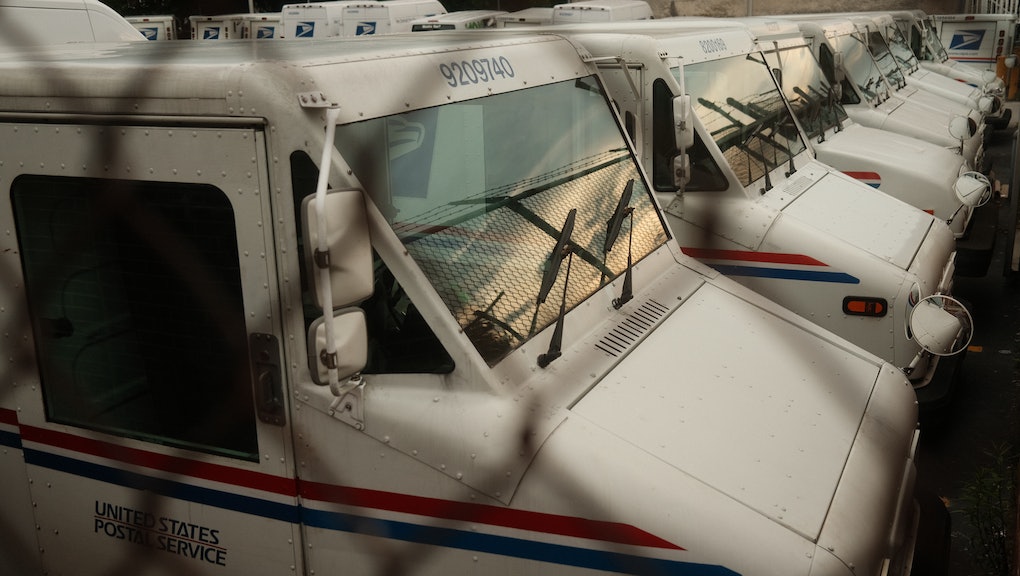 Coronavirus has put the USPS on the brink of extinction. Will anybody save it?

Since COVID-19 forced people to shelter in place and businesses to adapt or collapse, headlines have sung a dirge for America as we know it. And that was before nationwide protests demanding justice for the murders of Black Americans at the hands of police officers were met with ... violent reprisals by the police.

But beneath these existential dilemmas and horrors rests the economic peril facing the United States Postal Service. Think of the USPS as the mortar that holds the U.S. together by performing a simple, invaluable task: delivering mail. Everybody gets mail every single day, which means mail delivery gets taken for granted within the bustle of American routines. But a country without the USPS is a country deprived of arguably its most vital (and certainly its most beloved) office. The Postal Service’s future has looked increasingly grim since March, as elected officials and certain executives in charge have done little to address the problems bearing down on the organization. They’ve even taken steps to exacerbate those problems, including denying the USPS stimulus money in the Coronavirus Aid, Relief, and Economic Security (CARES) Act.

Picturing America without the USPS is impossible, because America has had the USPS since 1775 — a.k.a., before it was even America. There aren't many realistic alternatives, either: Privatized mail delivery is largely a fantasy, because legal prohibitions forbid anybody but Postal Service employees from touching mailboxes. We also know that private companies don’t want to deliver the mail anyways. As one member of the National Rural Letter Carriers’ Association labor union, who asked to remain anonymous out of an abundance of caution, tells Mic: “Private logistic firms can’t and won’t go out to rural areas.” It’s only because of the USPS that people who live in rural places can still get their mail. Mail delivery isn’t a profitable enterprise at all, in fact; UPS and FedEx would rather deliver packages because they can make money off them. Postage costs and weight make stamped envelopes a much less enticing commodity by comparison.

In the end, then, the USPS is a social equalizer of sorts. Even before the coronavirus pandemic and the events that led to the USPS’s prior financial woes — which were very deep and real already — the subject of privatization had been broached in politics and subsequently dismissed. The USPS can’t function like a business, for the same reason that, say public transportation can’t. It’s an agency meant to break even and provide Americans a service, not one providing a commodity good that can generate a profit.

This combined with wide bipartisan and public support for the Postal Service makes it puzzling why its survival is in question at all. No one wants the USPS to fail, especially Republicans with rural bases; those people won’t get fundraising mailers if the Postal Service doesn’t deliver them. And regardless of their political designation or place of residence, “everyone has a right to mail service,” as one long-time Postal Service employee, speaking to Mic under anonymity, put it. This explains the Postal Service’s popularity among Americans: It’s a critical democratic institution, and not one that is usually subject to across-the-aisle squabbling.

While the USPS takes no ideological view of its own, the animosity President Trump has for the agency (which is perhaps better understood as displaced animosity for Amazon), alongside the current GOP habit of falling in line instead of questioning their president, has made the Postal Service’s survival into a partisan matter. The Republican view of the USPS, according to the Postal Service employee, is that it should either be privatized or dismantled.

But the issue may come down to what Republicans say openly, and what they do privately: Allowing the USPS to implode could turn their voters against them. “GOP candidates have lost constituents over this issue,” the employee says, a view that appears to be supported by Pew Research Center polls showing an equal embrace of the USPS by Democrats as well as Republicans. Refusing aid to the Postal Service could, in other words, severely disadvantage the Republican party.

Folded into the fight for the Postal Service’s preservation is the recent appointment of Louis DeJoy as the new postmaster general. DeJoy knows how to get things from point A to point B: He was the CEO of New Breed Logistics, a supply chain and distribution center operations company, from 1983 to 2014, a check under the “pro” column. He’s also a Trump donor who threw the president a reception at his home in 2017. Given the contempt Trump has shown for the USPS, the total deference and loyalty given him by the GOP, and DeJoy’s penchant for cutting jobs, circumstances suggest that DeJoy’s appointment may actually be a consolidation of the campaign to kill the Postal Service.

Still, Ronnie Stutts, the president of the NRLCA, sees DeJoy’s appointment in optimistic terms. After a Zoom meeting with DeJoy last week, Stutts believes the new postmaster general to be “a very credible person,” he tells Mic. He takes DeJoy at his word on his intentions to keep the Postal Service alive. “Number one, he does not want a privatized Postal Service,” Stutts says of DeJoy. “He wants to keep universal mail delivery, like it's been forever. He wants to do what he can to see us rightsize the Postal Service and do the things we need to do to get ourselves back on track.” He sees DeJoy’s experience in marketing, for example, as a boon for the USPS, which Stutts feels is lacking in advertising.

Stutts also considers DeJoy’s familiarity with Trump to be a bonus where others might see it as an obstacle. “[DeJoy] made it very clear that he was not going to use his friendship with Donald Trump to do anything negative,” Stutts explains. “He’s going to do what he needs to do to be the postmaster general and make sure everything stays on the straight and narrow.”

Still, Stutts isn’t oblivious; he explains Trump’s plainspoken disdain for the USPS by saying that the president “is a man of grudge. He gets it in for somebody, and as you well know, he doesn't mind firing his staff, and doing those kinds of things.” Stutts points to Trump’s antagonism toward Amazon CEO Jeff Bezos as well as Trump’s insistence that the USPS is “doing favors for Amazon, and undercutting prices.” This isn’t true, but Trump’s repetition of the lie makes DeJoy’s proximity to him a boon, as far as Stutts is concerned, because DeJoy could potentially set the president straight on the facts.

Whether DeJoy proves friend or foe to the USPS is yet to be seen. But Republicans have been hobbling the USPS for years, and its financial predicament isn’t a product of the COVID-19 pandemic but rather exacerbated by it. In 2006, President George W. Bush signed into law the Postal Enhancement and Accountability Act, which was initiated and facilitated predominantly by Republicans and forced the USPS to prefund retiree health benefits 75 years into the future. That sounds lovely on paper, but in practice it costs the agency $5.5 billion a year, creating the perception that the USPS loses billions each year. But this is not entirely the case: Prefunding gives the appearance of losses, but USPS fiscal disclosures show that they’ve made more money in the last quarter than in the same quarter in 2019.

All the same, the Postal Service is expected to lose $2 billion per month until the country returns to its pre-coronavirus levels of income, which means it’s still an agency in dire need of a bailout. California Rep. Mike Levin (D) is pushing the Senate for a $25 billion loan for this exact reason. Working in his favor is wide support among unions (such as the NRLCA) for the $25 billion stimulus: Certain revenue streams, particularly packages, have gone up as people shop from home, but traditional USPS money-makers like First Class Mail are down. This see-saw effect requires government aid to resolve.

“It's not if the Postal Service is going to run out of operating capital. It's when.”

Spending money on essential services is apparently anathema to the GOP-controlled Senate, though. So in the meantime, other suggestions for saving the Postal Service have been floated, most of them terrible: toned-down forms of privatization, in which the USPS leases out mailbox space to other entities; delivery priority based on purpose and need; cutting back on the days that mail gets delivered. But we already know none of these can work.

The first suggestion won’t hold up in Congress, again thanks to prohibitions over who can touch mailboxes. The second won’t hold up because speech can’t be prioritized that way — and yes, the First Amendment applies to mail delivery. The third feels rational compared to the first and the second, but it’d go down like a lead balloon with Americans who rely on the USPS for medication, paychecks, and other life necessities.

The USPS needs a solution, or at least a stopgap, to keep those necessities moving. Stutts states the reality plainly: “It's not if the Postal Service is going to run out of operating capital. It's when. That's the issue, because it's going to happen.”

It’s a sobering thought. An America without the USPS is an America without democracy. Postal workers see their job as sacred. What they do every day is a source of pride. Changing the character of the USPS, whether that means dissolving it or taking steps to remove it from what the Founding Fathers intended it for, means robbing that pride and profaning the trust put into the office by Americans all across the country. And it means cutting a lifeline at a moment when people desperately need it.

More like this
Why are there protests in Colombia? How a tax proposal ignited decades of unrest
By Ray Levy Uyeda
I am Asian American. No hyphen required
By Frances Kai-Hwa Wang
Marco Rubio wants to give survivors of domestic terrorism … one year of student loan relief?
By Rafi Schwartz
Stay up to date