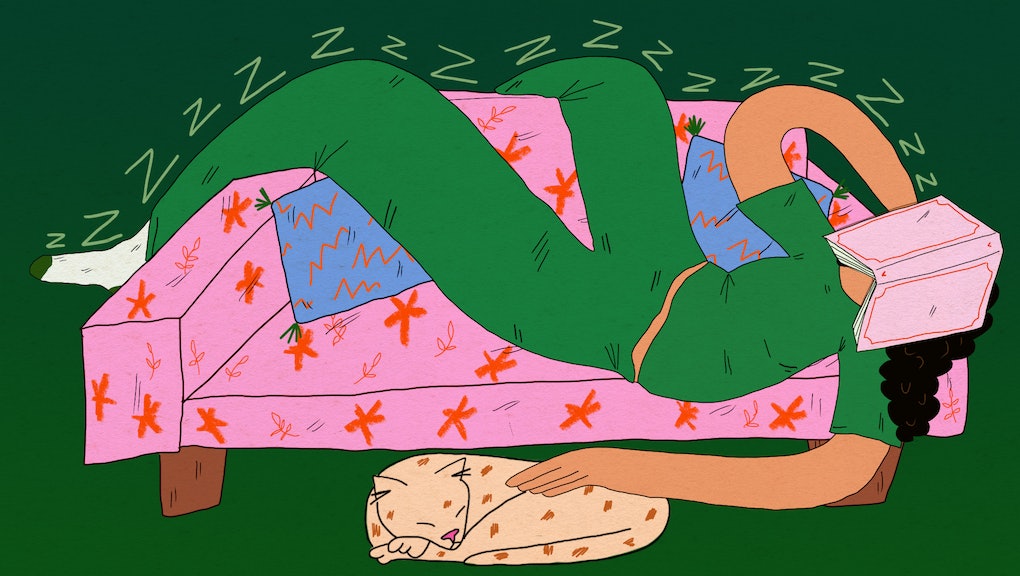 Could an afternoon nap really be better than sleeping more at night?

Daily naps are a non-negotiable part of my life. If I don’t nap by three in the afternoon, I basically can’t function and no amount of coffee can carry me. I have too much to do to live with brain fog, and napping makes me more productive. It turns out that my kindergarten-inspired habit might actually be an evidence-based strategy, though, because research has suggested that for some, implementing a nap during the day could be even more beneficial than increasing the hours you sleep at night.

A small but revealing study that dropped this past spring in the Quarterly Journal of Economics investigated the sleep habits of 452 individuals in Chennai, India who were having problems sleeping. According to the study, the participants woke up on average 31 times each night, and despite the fact that they stayed in bed for eight hours, they only averaged only five-and-a-half hours of sleep. So even though they went to bed with the intention of sleeping the whole night, they couldn’t.

Researchers call this kind of broken up sleep, “sleep fragmentation,” and the result of it is called “sleep inefficiency.” And yea, it’s not great: Chronic sleep inefficiency can lead to a host of health problems, but what the researchers were interested in was the participants' productivity. What they found was that when individuals took a short afternoon nap, their productivity went up, but when they slept a little extra at night — about 30 minutes extra, to be exact — their productivity went down.

The findings are kind of wild considering there’s always been a lot of stress placed on getting enough sleep at night. One theory about why naps may have been more effective for these individuals has to do with the how “good” or restful the sleep is. The extra sleep the research participants got at night increased in quantity over the three weeks of the study, but it may not have increased in quality, according to the study.

It’s important to note: All the people involved in the study are described as lower income industrial workers, and even though there were attempts made by the researchers to control the home environments of the participants so they could sleep more, there just aren’t any short-term solutions to poverty. If you are poor and you live in a city in crowded conditions, there’s little you can do about the amount of light and noise created around you, and the researchers involved in the study just couldn’t control all the variables that go into getting quality sleep.

But researchers could control the conditions in the work environment, where participants were taking their naps (naps at work, by the way, are kind of revolutionary). “Naps in our study occurred in a more comfortable office environment,” than peoples’ homes, the study stated.

That could account for an increase in the quality of participants’ sleep, which may have made them more productive. “The study raises a great point about the benefits of napping,” says Carleara Weiss, a registered nurse in New York who studies sleep and circadian rhythms at State College of New York in Buffalo. But, Weiss adds, “The critical fact in this study is that napping was helpful for individuals who were not getting enough sleep.”

In other words, napping may have made for more high quality sleep for people in the study because they already weren’t sleeping enough. So this research doesn’t mean that you, personally, should sleep less at night and start napping. The context matters. When I asked Weiss whether it was better to sleep an extra hour at night or nap during the day, she said, “Depends on who needs the nap.”

Napping, says Weiss, is a great strategy for people who are sleep deprived. But, she says that a better approach for long-term benefits would be to conduct a sleep assessment to understand why someone is not sleeping at night and address the underlying issues. It is unlikely that the demographic of the study — poorer working class Indians — has access to these kinds of first-world healthcare interventions. Basically, it’s easier for employers to figure out how to give their workers a nap in order to increase output than it is to, say, pay them more so they can live in a place where it’s easier to sleep at night.

Other experts, though, think that napping is good for everyone. “Daytime napping can aid in ensuring an adequate amount of restful sleep is obtained,” says Bruce Forman, a clinical psychologist in Florida who specializes in insomnia, “It can renew energy and increase cognitive functioning, like problem-solving and memory.” But, he warns, napping should be short and sweet. This is one area where Forman and Weiss definitely agree — the best naps are between twenty and thirty minutes and you should take them before 3 p.m. so they don’t interrupt your sleep at night.

“Shift workers, people experiencing daytime sleepiness and sleep deprivation, persons feeling jet lag (either travel-related or social), parents with newborn babies, and older adults are good candidates for a nap,” says Weiss. Weiss is concerned that napping is not a good long term solution for most people, though. “Life gets in the way of good sleep, and many times, we want a quick fix,” she says. Compulsive napping could prevent you from developing good long term habits. “Daytime napping could make sleep problems worse,” Forman agrees. So, yes, napping is a good quick fix sometimes, but if it becomes compulsory — it me — you should probably tell a doctor.

More like this
Could fresh air be the key to ending the pandemic?
By Melissa Pandika
'Nine Perfect Strangers' is a deranged portrait of psychedelic wellness retreats
By Erin Qualey
Why TikTokers are chugging pineapple juice before wisdom tooth surgery
By Ian Kumamoto
Stay up to date