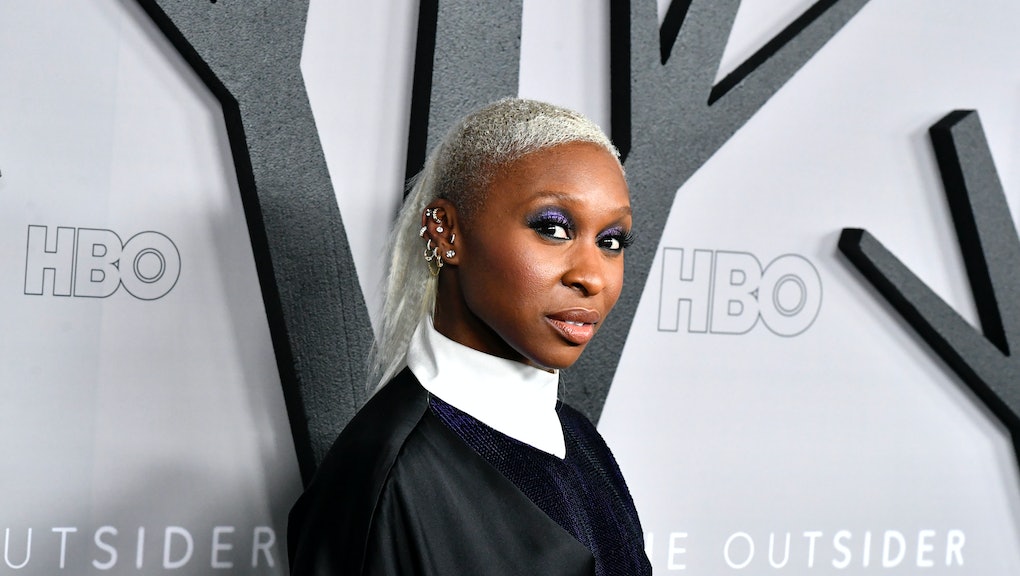 HBO’s The Outsider is an enthralling show. The first two episodes, dropped as a pair, had me hooked from the beginning. I still can’t get that gruesome image of Jason Bateman looking like a member of the Donner Party out of my head…

But The Outsider’s third chapter, which dropped Sunday night, surpassed the others in my estimation, because the show finally introduced its star: Cynthia Erivo.

Erivo plays Holly Gibney, a recurring character in the Stephen King universe, who’s a neuroatypical private eye with a penchant for retracing people’s steps in minute detail. Holly falls somewhere on the Autism spectrum and possesses the incredible, inexplicable ability to recall knowledge about things she’s never even been exposed to. As a child, she was institutionalized and studied, but these days she’s called on by the law for her skills.

Anyway, in Stephen King’s books, Holly is white. Richard Price, who adapted King’s novel, told Salon he followed suit, writing Holly’s parents as Lithuanian and making her father a coal miner. But Jason Bateman (who not only co-stars in The Outsider but directed the first two episodes and executive produced the series) insisted from day one that Erivo had to play Holly. God love him.

I’ve read a lot of books and watched a lot of TV about female detectives — it’s one of my nerdy passions. But upon reflection, The Outsider is one of the first times the heroine’s been a woman of color. Add that to the fact that Holly is neurodiverse, and you’ve got a complex, powerful character. Erivo, whose Nigerian parents raised her in London, pointed out that these roles are still really rare for women of color, and that made the opportunity to play Holly even more meaningful. Erivo wanted to make sure her performance didn’t veer into caricature, for example.

Erivo was the only actor of color nominated for an Academy Award last week. She's actually nominated for two: Best Actress and Best Original Song, both for Harriet. If she wins either award, Erivo will have earned her E.G.O.T. (She already has an Emmy, a Grammy and a Tony to her name.)

After the Oscar nominations were announced, film lovers expressed widespread outrage over the fact that the Academy Awards are, still, so white. And unfortunately, Stephen King subsequently decided to tweet his opinion on the state of diversity in Hollywood.

“As a writer, I am allowed to nominate in just 3 categories: Best Picture, Best Adapted Screenplay, and Best Original Screenplay. For me, the diversity issue–as it applies to individual actors and directors, anyway–did not come up,” he tweeted. “That said, I would never consider diversity in matters of art. Only quality. It seems to me that to do otherwise would be wrong.”

King added, “The most important thing we can do as artists and creative people is make sure everyone has the same fair shot, regardless of sex, color, or orientation. Right now such people are badly under-represented, and not only in the arts.”

People were upset, naturally. And since King is the creator of Erivo's character on The Outsider, reporters asked her about his comments during a panel before the Television Critics Association (TCA)... But Erivo essentially told people it's not her job to explain away King's comments — or fix the problem of the lack of diversity in Hollywood. She said Hollywood decision makers need to “open their eyes and open doors” to people telling diverse stories.

“It’s up to people used to doing things a certain way to shake things up and do things to make sure the room reflects the world we live in,” Erivo said. “If I can help, I will."

More like this
Steve from 'Blue's Clues' gave us the closure we didn't know we needed
By Kara Weisenstein
Colin Kaepernick's new Netflix documentary highlights the man behind the icon
By Keith Nelson Jr.
Willie Garson’s pristine performance on 'Sex and the City' changed queer representation forever
By Chloe Stillwell
Stay up to date