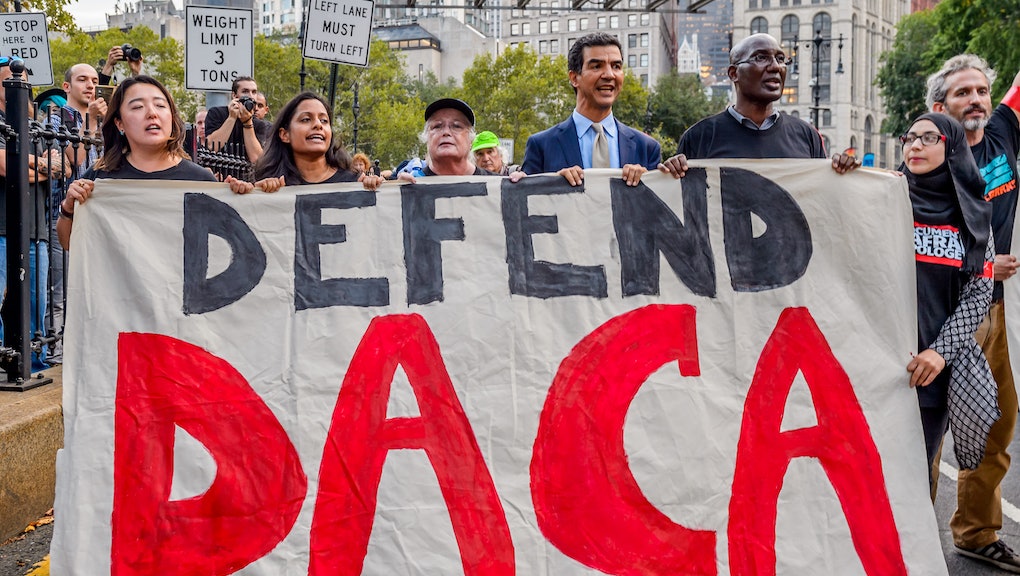 Four years ago, just after President Trump took the oath of office, the 45th administration began slashing protections available to people who immigrated to the U.S. Of the many items on the executive branch's chopping block, it was the move to strip protections for those who arrived to the country as children that ignited one of the largest political battles of Trump's four years.

The Deferred Action for Childhood Arrivals (DACA) program offers protected immigration status to some undocumented immigrants — known as "dreamers" — who came to the U.S. before the age of 16. It grants eligible immigrants work authorization and shields them from deportation. Now, four years later, it looks like Trump's effort to dismantle the Obama administration-era program has been for naught. On Friday, a federal district court judge, Nicholas Garaufis, ruled that the Trump administration's effort to dismantle the program could not stand. That means that starting Monday, eligible residents can once again apply for DACA protection.

The court decision follows a long road of the Department of Homeland Security (DHS) politicizing the DACA program. In this past year alone, the Supreme Court prevented the Trump administration from ending the program completely — though only on a technicality, which left the door open for Trump to try again to dismantle DACA. Then, it turned out that DHS was violating the court's decision by rejecting valid applications; a federal judge stepped in to hold the agency accountable, which Chad Wolf, who is serving as the acting homeland security secretary, responded to by cutting the DACA protection status from two-year terms to one-year terms and blocking new applications. Garaufis ruled as recently as November that Wolf's reactionary changes implemented over the summer were not constitutional.

This all leads us to Friday, when Garaufis declared that federal government must restore the DACA program to its pre-court battle days. That means that thousands of individuals can once again fully participate in American life.

"More than three years ago, the Trump administration attempted its fatal blow to the DACA program, but immigrant youth and the movement fought back and won," Madhuri Grewal, federal immigration policy counsel for the American Civil Liberties Union, said in a press release. "After Trump lost at the Supreme Court, the administration in July tried once again to attack DACA — limiting renewals to just one year and blocking overdue relief to DACA-eligible immigrant youth. Tonight, we celebrate another victory. Dreamers, and DACA, are here to stay."

To be clear, this latest judgement is not a moral or humanitarian ruling. The main reason Garaufis ruled that DHS needs to start administering the program as intended by the Obama administration was because Wolf wasn't qualified to make changes to the program. Wolf was and continues to act as the acting secretary of DHS, even though he technically doesn't fill that role; he was never confirmed by the Senate, which prompted Garaufis's decision.

This is not the first time that a federal judge has questioned the legitimacy of acting secretaries making changes to federal regulations and executive actions, but it offers the most resounding rebuke to the Trump administration's efforts on immigration. Eligibility criteria for DACA protections is strict and includes limitations based on criminal records, age upon arrival, the number of years lived in the U.S., and receipt of a high school education or completed military service. ]

Still, even under the Obama administration's rules, DACA protection did not allow an individual to apply for full legal residency. President-elect Joe Biden has pledged to restore the DACA program and expand the law by adding a path to citizenship.

More like this
The CDC's eviction freeze has been unfrozen by a federal judge
By Rafi Schwartz
Marjorie Taylor Greene and her team are just openly accosting people in Congress now
By Rafi Schwartz
Buckle up: The investigation into the Jan. 6 insurrection is just getting started
By Rafi Schwartz
Stay up to date