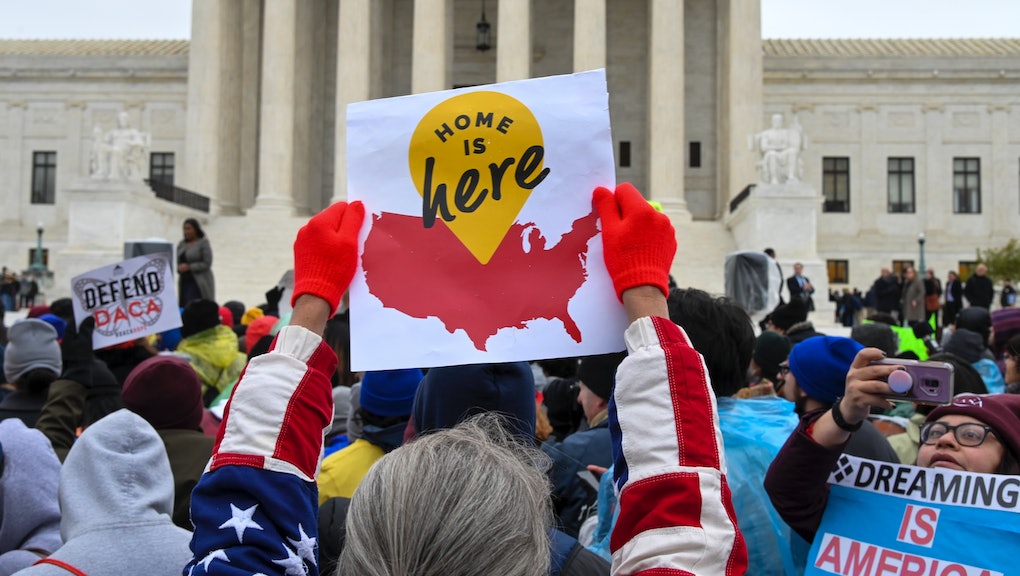 By a margin of 5 to 4, the Supreme Court on Thursday ruled that President Trump could not end the Deferred Action for Childhood Arrivals immigration program, commonly known as DACA, launched during the Obama administration.

The ruling, which saw conservative Chief Justice John Roberts joining the bench's traditionally liberal wing, came more than eight months after the court heard arguments over whether or not the president had the legal authority to end immigration protections granted by his predecessor to undocumented people who were brought to the United States when they were children. Trump had initially announced his intent to end the program during his first year in office, promising in a statement to "resolve the DACA issue with heart and compassion," before launching into one of the most anti-immigrant pushes in modern American history.

In his majority opinion, Roberts stressed that the decision to reject the Trump administration's efforts to end DACA rests on a largely technical, rather than moral, imperative.

"We do not decide whether DACA or its rescission are sound policies," Roberts wrote. "'The wisdom' of those decisions 'is none of our concern.'”

We address only whether the [Department of Homeland Security] complied with the procedural requirement that it provide a reasoned explanation for its action. Here the agency failed to consider the conspicuous issues of whether to retain forbearance and what if anything to do about the hardship to DACA recipients. That dual failure raises doubts about whether the agency appreciated the scope of its discretion or exercised that discretion in a reasonable manner. The appropriate recourse is therefore to remand to DHS so that it may consider the problem anew.

While DACA recipients are not granted automatic citizenship under the program, they are shielded from deportation, given work authorization, and placed on a path toward permanent residency or citizenship. It is estimated there are some 600,000 DACA recipients currently in the United States.

Notably, because the Supreme Court did not rule on the merits of rescinding DACA, but rather the manner in which the Trump administration attempted to do so, Trump could technically try again to cancel the DACA program and offer a more robust justification. Trump himself has flip-flopped on the matter many times, and as NBC News noted, it's unclear whether he'd want to take the risk of ending the popular program just before a re-election battle.

Earlier this week, the conservative-leaning Supreme Court delivered another surprising win for liberal priorities, protecting LGBTQ workers from job discrimination. In that decision, both Roberts and Justice Neil Gorsuch joined the court's liberals.