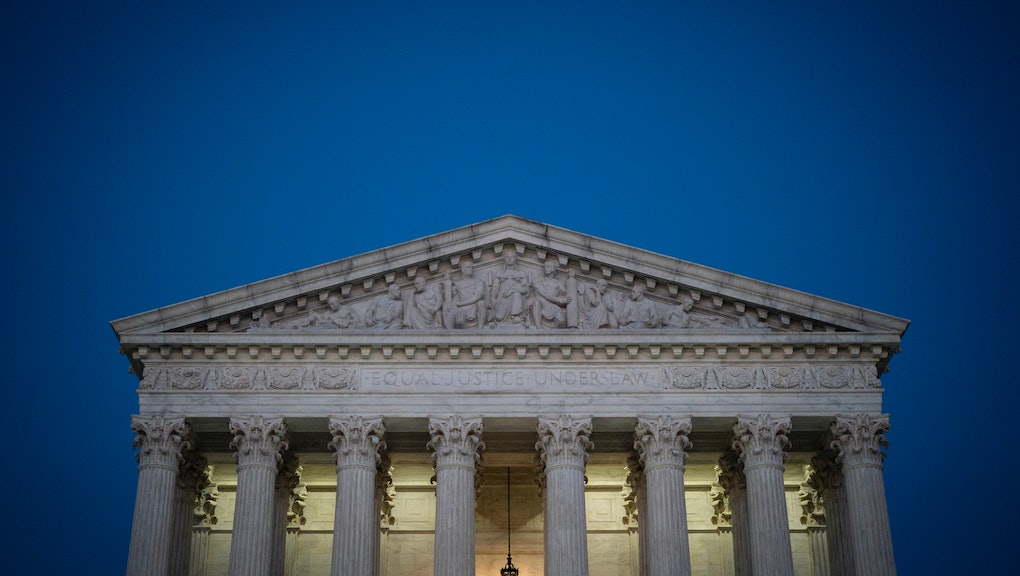 How does a case get to the Supreme Court? A brief guide to the federal court system

With President Trump poised to leave office in January (whether he likes it or not), Republicans are gearing up for a last-ditch effort to leave their mark on the country as the party in power. Arguably, Trump's biggest success as president has been his appointment of scores of conservatives judges to lifetime appointments on federal benches across the country. While the Supreme Court generally gets the most scrutiny and attention on its makeup and ideological lean, the reality is that America's entire federal court system has been nudged right by Trump and Senate Majority Leader Mitch McConnell.

That's not going to change, even with Trump as a lame-duck president now. McConnell has already vowed that the remaining weeks of this congressional session will be devoted to confirming Trump's outstanding judicial nominees. He has been instrumental in pushing through Trump's three Supreme Court nominees of Neil Gorsuch, Brett Kavanaugh, and most recently, Amy Coney Barrett — but, as The Washington Post noted, he and Trump have teamed up to push through 222 judges across the three levels of federal courts.

The Constitution doesn't detail what the make up of the judicial system should be, only that there must be a federal court system to balance out the executive and legislative branches. As a result, presidents have tremendous leeway in deciding who they appoint to serve on these courts, and how. Trump has appointed roughly a quarter of the judges currently serving in the judicial branch, which is even more astounding when compared to the efforts of past presidents: Per CNN, "former President George W. Bush successfully appointed 340 judges during his eight years in office, while former President Bill Clinton put 387 judges on the bench during his two terms." Former President Barack Obama appointed 334 judges in eight years. Trump has appointed well over half of what his predecessors did, in less than half the time.

So, while all eyes are usually on the Supreme Court, it's the lower courts that actually decide what cases even make it to the nine justices. The lower court system overall has incredible power in deciding how constitutional law is applied across the country; what a judge in California decides could have a direct impact on the way that Kansans lead their lives. Here's what you should know about the federal court system.

District courts are basically the trial courts of the federal court system, where judges hear civil and criminal cases based in federal law or statute. There are about 673 judges — nominated by presidents and confirmed by the Senate — who serve lifetime appointments in what the Brookings Institute refers to as the "backbone of the federal judicial system." The Trump administration has appointed 157 district court judges, most, if not all of whom share Trump's extreme political views.

District courts hear cases that deal with law relating to the Constitution — they're not concerned with state-level constitutions or municipal civil cases. For example, during the Trump administration, federal district court judges dealt with a lot of immigration cases, as the agencies that manage immigration are federal. In 2018, a district court judge was responsible for blocking a Trump administration rule prohibiting immigrants from claiming asylum based on where they entered the country.

There are 53 vacancies at the district court level, with 31 nominees waiting to be approved. The 12-person Senate Judiciary Committee votes to advance nominees, and then the nomination heads to the full Senate for a final vote. On Nov. 10, the Senate confirmed the appointment of James Ray Knepp II; on Nov. 12, the upper chamber confirmed Aileen Mercedes Cannon, a former federal prosecutor.

If someone doesn't agree with a district court judge's ruling on their case, lawyers can ask that the next court up on the judicial ladder review the verdict. This is called making an "appeal," and the courts that weigh in on these matters are the circuit appellate courts. There are 13 circuit courts of appeals spanning the country, and each one is comprised of a three-judge panel. Each of those judges are nominated by the president. Currently, there are two vacancies at the circuit court of appeals level, and no pending nominees.

While circuit courts lack the drama of the Supreme Court, their rulings can be consequential in shaping the outcome of federal policy all the same. For instance, earlier this year the Sixth Circuit Court of Appeals ruled that students have a constitutional right to literacy. In this instance, as Mic explained in April, the ruling actually resulted from a lower district court's judgement that the opposite was true: "Initially brought in 2016, the student's suit was dismissed in 2018 by Federal District Court Judge Stephen J. Murphy III, who claimed that despite the 'devastating' conditions found in several Detroit public schools, access to literacy was not a constitutional right." Lawyers appealed the district court's decision, moving the ruling before the corresponding circuit court of appeals, where it was overturned.

The Trump administration has appointed 53 circuit court judges, which, as The Wall Street Journal pointed out, means that seven of the 13 appellate courts lean Republican. The vast majority of circuit court decisions are final, meaning that the appellate court judges will often have the last say on the constitutional issues in the cases brought before them. Given the legal principle of stare decisis, which puts great importance on judicial precedent when deciding new cases, this gives circuit courts significant power.

That element of finality can have political consequences too, whether or not justices and judges agree. A Brookings Institute report claimed that the Trump administration had been strategic in their choices for the judicial branch, choosing younger judges for circuit court nominations, which, "along with changes in Senate procedure, will strengthen the conservative make-up of the appellate judiciary" given judgeships are lifetime appointments.

The Supreme Court is in charge of hearing cases of national importance or great bearing on how federal law is applied throughout the country. Think: segregating then desegregating public schools; deciding a president; sanctioning marriage equality.

If one party still doesn't agree with the circuit court's judgement, then they're able to appeal the case a second and final time to the Supreme Court. Every year, thousands of lawyers, legal groups, or organizations submit their cases for judicial review by the Supreme Court, which ultimately choses to hear just a fraction of those cases. Four out of the nine justices need to approve a case's application to be heard. (This is why so many appellate court rulings are in fact the final say on a particular issue.)

The justices often choose cases where lower courts have previously offered different rulings on the same issue. For instance, up until 1973, states had different laws governing someone's access to a physician-administered abortion. Then, a case originating in Dallas made its way to the Supreme Court, which ruled in Roe v. Wade that there was a constitutional right to access abortion without undue burden, meaning the entire country had to now adhere to that right.

More like this
Universal basic income: Why doesn't the United States have it yet?
By Rafi Schwartz
'Dobbs v. Jackson Women's Health' is SCOTUS's first chance to overturn 'Roe'
By Rafi Schwartz
The CDC's eviction freeze has been unfrozen by a federal judge
By Rafi Schwartz
Stay up to date