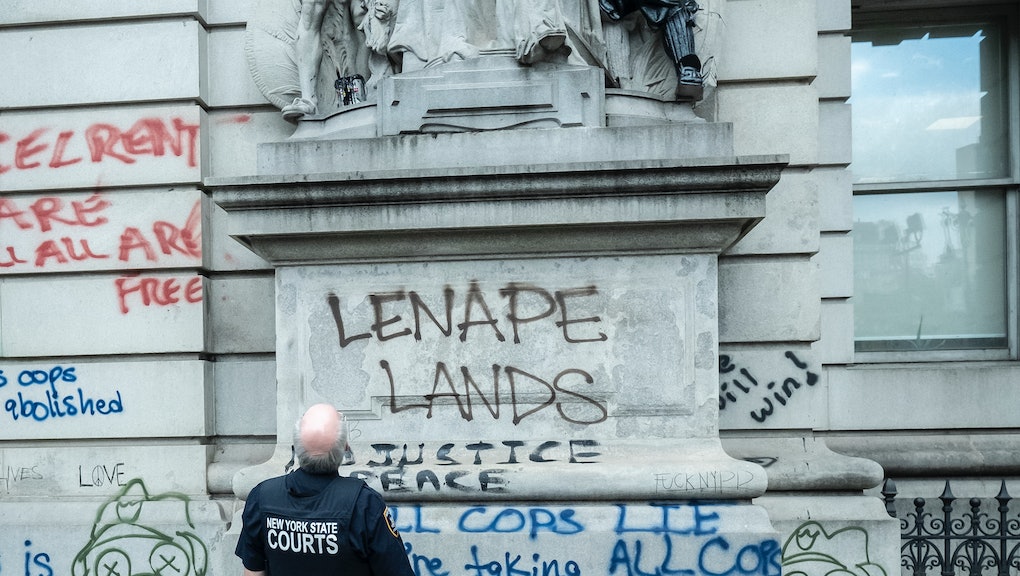 Anti-police protests and activism were spurred by the police killing of George Floyd at the end of May, but the problems with policing and white supremacy extended far beyond Minneapolis alone. In fact, America's history and legacy of systemic racism is, for many, literally embodied in a number of monuments across the country. These statues, honoring Confederate generals and other racist figures, have become popular targets for protesters. As a result, on Wednesday the Department of Homeland Security announced that it has launched a task force to protect monuments over the July 4 weekend.

Last month, President Trump called for protesters who defaced or destroyed statues to face prison time. In one tweet, Trump said he was invoking the 2003 Veteran's Memorial Preservation Act, which makes attempts to damage or destroy monuments commemorating veterans punishable by up to a decade in prison. Protesters have gone after statues of Confederate generals and slave-owning presidents, not just general monuments commemorating veterans.

There was initial confusion about whether the Veteran's Memorial Preservation Act even applied to the protesters Trump appeared to be threatening. Nevertheless, Trump moved ahead and signed an Executive Order on June 26. And now, the Department of Homeland Security has followed up by creating the Protecting American Communities Task Force (PACT), to effectively be the force upholding Trump's order.

“DHS is answering the president’s call to use our law enforcement personnel across the country to protect our historic landmarks,” Acting DHS Secretary Chad F. Wolf said in a statement. “We won’t stand idly by while violent anarchists and rioters seek not only to vandalize and destroy the symbols of our nation, but to disrupt law and order and sow chaos in our communities.”

A memo obtained by Fox News says that Rapid Deployment Teams from PACT will be sent to Portland, Oregon, Seattle, and Washington, D.C. In those cities, protesters have targeted statues of Thomas Jefferson, Andrew Jackson, and others.

Notably, Trump's initial tweets about protecting statues were motivated by protesters in Washington, D.C., trying to bring down a statue of Jackson in Lafayette Square, which is across the street from the White House. Police used mace to clear protesters. It wasn't the first time police used chemical tactics in Lafayette Square, either. In June, protesters were tear-gassed so Trump could get a photo-op outside of a church.

With Trump's executive order and the formation of an entire DHS task force dedicated to opposing protesters, the federal government is continuing to position protesters as domestic terrorists. In the past, Trump has even shared a letter outright calling protesters "terrorists", and Wolf's statement looks to scapegoat "violent anarchists and rioters."

“As we approach the July 4 holiday, I have directed the deployment and pre-positioning of Rapid Deployment Teams (RDT) across the country to respond to potential threats to facilities and property,” Wolf said. “While the department respects every American’s right to protest peacefully, violence and civil unrest will not be tolerated.”

That, of course, is the fundamental issue. Civil unrest is a pillar of American protesting.

Protesters are standing up against violence — not only the violence of police killings like that of Floyd in Minnesota and Breonna Taylor in Kentucky, but also the violence of a government that will pay lip service to dismantling white supremacy while allowing monuments to its legacy to remain.

And while DHS proclaims that its task force is intended to protect American communities, we are in the middle of a pandemic. While it is unclear how much money DHS is pouring into PACT, the agency is also in the middle of launching a surveillance program to target Muslims. In both cases, DHS is using funding to further oppress communities when that money could be better spent actually protecting Americans by addressing coronavirus.

Ultimately, DHS's task forces are never really about protection — just as none of this is really about statues. At the end of the day, protesters are looking to not only disrupt the status quo, but upend it entirely. To men like Trump and Wolf, each vandalized or removed statue shows that protesters are getting closer and closer to reaching their goal.

More like this
A Minnesota college professor raised $200k in Philando Castile's name. Where did the money go?
By Rafi Schwartz
Derek Chauvin's lawyers seriously just asked for probation instead of jail time
By Rafi Schwartz
A Philly foster agency can continue discriminating against LGBTQ families, SCOTUS rules
By Rafi Schwartz
Stay up to date