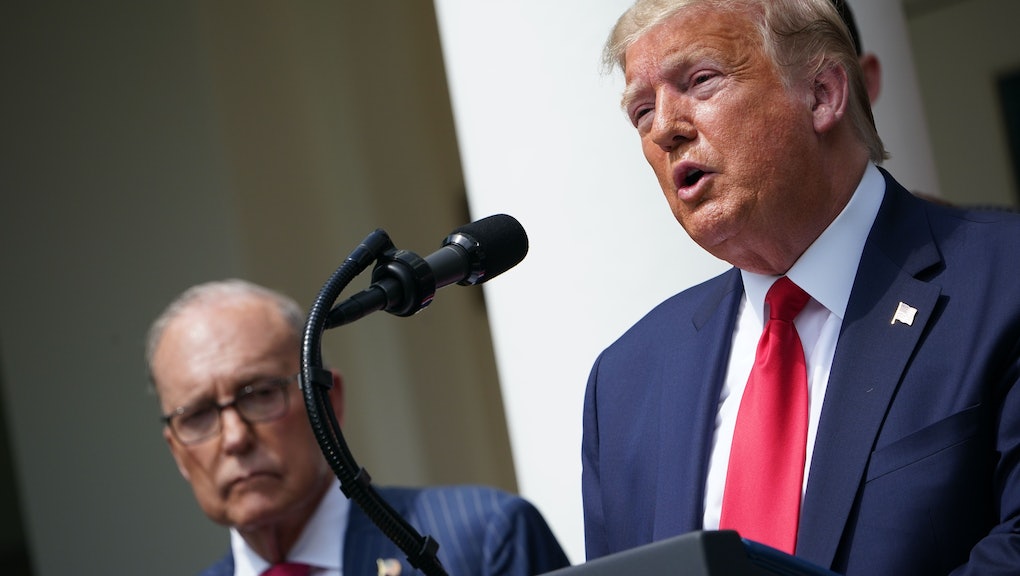 As protests spurred by the Minneapolis police killing of George Floyd continue, police are attacking demonstrators with pepper spray, tear gas, rubber pullets, batons, and more. These "non-lethal" tools have blinded a photojournalist in one eye, left a Black student with brain damage, and more. In his usual fashion, rather than condemning police for their aggressive tactics, President Trump shared a letter Friday calling protesters "terrorists".

On Thursday, Trump tweeted a screenshot of a letter written by his former lawyer John Dowd. Given that the letter is addressed to "Jim," it's likely intended for former Defense Secretary Jim Mattis, who recently came out with a lengthy statement calling out Trump's fascist power plays amidst growing protests.

The letter specifically singles out protesters who were driven out of Washington, D.C.'s Lafayette Square with tear gas, flashbangs, and other weapons Monday. Dowd wrote, without any evidence, "The phony protesters near Lafayette park were not peaceful and are not real."

"They are terrorists using idle hate-filled students to burn and destroy," Dowd continued. "They were abusing and disrespecting the police when the police were preparing the area for the [7 p.m.] curfew."

There are a couple things wrong with Dowd's assertions. First, the protesters were very much real. And those very real protesters were assaulted without warning just so Trump could get a photo-op at a church. In response, the D.C. chapter of Black Lives Matter filed a lawsuit saying federal law enforcement violated protesters' constitutional rights.

“This case is about the president and attorney general of the United States ordering the use of violence against peaceful demonstrators who were speaking out against discriminatory police brutality targeted at Black people,” the complaint, filed in federal court in Washington, D.C., says.

While some might brush off Trump retweeting a letter calling protesters terrorists, it's important to interrogate it. The United States has a long history of labeling protesters as "terrorists" to justify the surveillance and persecution of oppressed communities. For example, the FBI's terrorism task force investigated the Standing Rock movement, an effort led by indigenous populations to protect their land, and went after Black activists with its "Black Identity Extremists" category.

But if the assertion that protesters are terrorists isn't enough, Dowd goes on to claim in the letter that "Trump has done more to help our minority brothers and sisters in three years than anyone in the last 50." Dowd also says, "No one has divided this country more than [former President Barack] Obama. He abandoned our Black brothers and sisters."

Trump shared Dowd's letter one day after he himself made similar claims. On Wednesday, Trump tweeted, "In three-and-a-half years, I’ve done much more for our Black population than Joe Biden has done in 43 years. Actually, he set them back big time with his crime bill, which he doesn’t even remember. I’ve done more for Black Americans, in fact, than any president in U.S. history ... "

While Biden's crime bill proved terrible for non-white communities, Trump hasn't helped Black people. First off, Black people are immigrants, too, and Trump has continuously targeted immigrants and undocumented people in particular. His administration is responsible for a 2017 travel ban that targeted multiple majority-Muslim nations, and it implemented an expanded ban on travel from several African countries this year.

Trump went on to cite the "possible exception of another Republican president," Abraham Lincoln. Republican leaders consistently invoke Lincoln's name to signal the greatness of their party and protect Trump from criticism. Once, House Minority Leader Kevin McCarthy (R-Calif.) said, "We are the party of Lincoln."

Sure, that's true — if you don't bother to analyze how parties have changed over the last nearly 200 years. Because while Lincoln did run as a Republican, that was all the way back in 1860. Republicans today are nowhere near the same as the Republican party then.

And less than a week before Trump proclaimed how great he is for Black people, he threatened Minneapolis protesters by tweeting, "When the looting starts, the shooting starts." The phrase is taken from Miami's former police chief, Walter Headley, who also said police would target "young hoodlums, from 15 to 21, who have taken advantage of the civil rights campaign. ... We don't mind being accused of police brutality." Hardly the language of a great liberator.