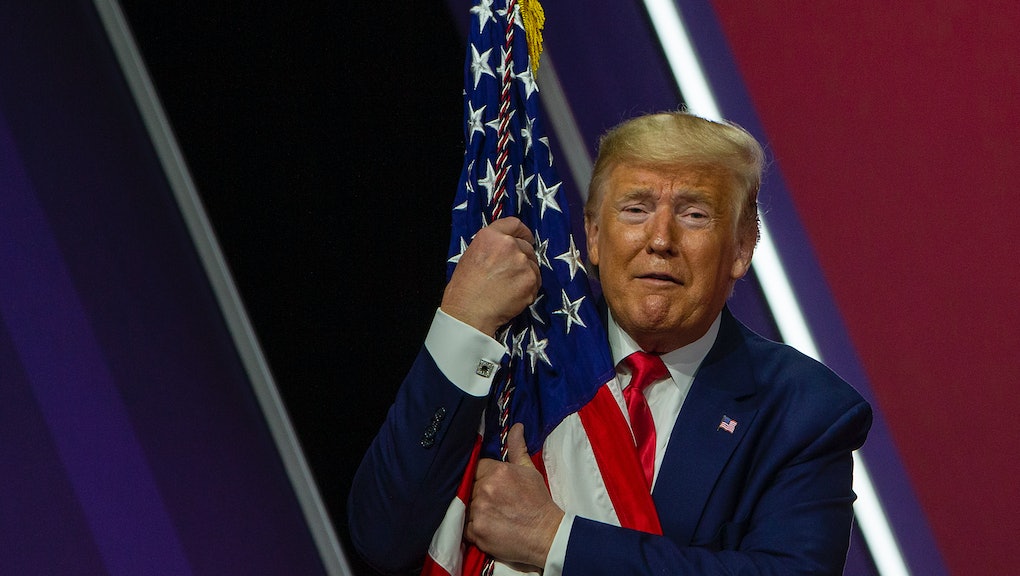 Donald Trump's time in the political spotlight has been all but defined by racism and sexism, with evidence aplenty. The mealy-mouthed excuses for it all are laughable. But the president, as befits a megalomaniac of his lofty status, seems not to be content with keeping his despicable bigotries to himself. Instead, he's taken steps to turn this accelerating commitment to awfulness into a federal case, literally.

With its benign title, the president's just-signed "Executive Order on Combating Race and Sex Stereotyping" seems like it would be a pretty good thing. But as Trump made clear in an accompanying statement, the goal isn't so much to combat race and sex stereotyping, as it is to ultimately punish those who actually want to do something to stop it.

Dubbing anti-racism and anti-sexism initiatives "harmful ideologies that cause divisions in our Federal workplaces," the president's EO essentially bars "training sessions based on race and sex stereotyping and scapegoating" across not only the government itself, but also for federal contractors and the military. The move comes shortly after the White House issued a similar memorandum to federal agencies banning anti-racism trainings as "divisive, anti-American propaganda."

In the test of his executive order, the president cites a number of cherry-picked instances in which federal offices engaged in anti-racism efforts and had the audacity to point out that systemic racism exists in the United States — something labeled a "divisive concept." The EO listed an example of such a concept as the notion that "the United States is fundamentally racist or sexist" — which seems like a pretty obvious statement considering that the Constitution listed Black people as 3/5 human, and (white) women weren't allowed to vote until 1920.

As the White House noted in a press statement accompanying the president's order, the new rule is part of a broader suite of initiatives by Trump to whitewash American history for the sake of "patriotic education." Last week, for example, the president announced his "1776 Commission," designed to indoctrinate American schools with the ahistorical patina of righteousness in the service of unquestioning authoritarianism.

In a particularly chilling subsection of the new EO, the president even authorized the Department of Labor "to establish a hotline and investigate complaints received under...this order," which is the sort of 1984-ish surveillance state development that would be laughably cliché if it weren't part of Trump's broader fascist sweep.

According to the White House, the president's executive order is "effective immediately."

In response to the news, ReNika Moore, director of the American Civil Liberties Union (ACLU) Racial Justice Program, told Axios in an emailed statement, "Our country needs to acknowledge and reckon with its history of systemic racism and racial discrimination. Instead, the Trump Administration is leading with ignorance and moving to ban training that could help address the issue. This is an attack on the fight for racial justice."