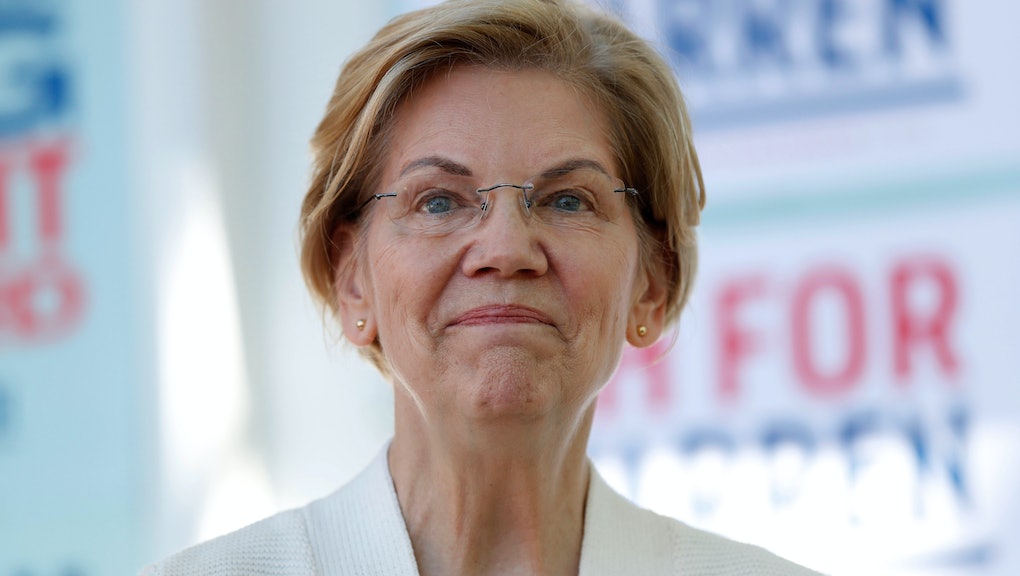 Democratic presidential candidate and Massachusetts Senator Elizabeth Warren is ready for Donald Trump's impeachment. She first endorsed impeachment in April, after releasing sections of special counsel Robert Mueller's report on the Department of Justice investigation into the 2016 presidential elections. And after Mueller's first and only press conference regarding the findings of his Department of Justice investigation, Warren's released a plan in which she doubles down on that stance.

In a post on Medium titled "No President is Above the Law" published on May 31, Warren wrote that she believes it is time for Congress to begin impeachment. But Warren didn't just call for Trump's impeachment – she also promised that if she became president, she would change the policy that prevents the Department of Justice from indicting sitting presidents on criminal charges. When Mueller spoke about the findings in the investigation on May 29, he explained that whether or not there is evidence that a president committed crimes, the DOJ cannot indict them while they hold office.

“If we had had confidence that the president clearly did not commit a crime, we would have said so,” Mueller said during the press conference. Warren wrote in her Medium post that she believes if the DOJ had been allowed to indict Trump, they would have.

“Mueller’s statement made clear what those of us who have read his report already knew: He’s referring Donald Trump for impeachment, and it’s up to Congress to act,” she wrote.

Her post continued with an outline of her plan, and a direct attack on Donald Trump:

But impeachment isn’t supposed to be the only way that a President can be held accountable for committing a crime... Congress should make it clear that Presidents can be indicted for criminal activity, including obstruction of justice. And when I’m President, I’ll appoint Justice Department officials who will reverse flawed policies so no President is shielded from criminal accountability.

Donald Trump believes that he can violate the law, and he believes that the role of the Department of Justice is to help him get away with it. That’s not how our country is supposed to work.

Trump hasn't directly addressed Warren's calls for impeachment since Mueller's statement on Wednesday. But he has tweeted more generally about the former special counsel's statements, characterizing the investigation into the 2016 presidential election as a "witch hunt."

Warren is not the only Democratic presidential candidate to call for Trump's impeachment. Following Mueller's statement on Wednesday, Beto O'Rourke, Kamala Harris, Pete Buttigieg, and Cory Booker all called on Congress to begin impeachment proceedings. But despite so many prominent Democrats ready for Trump to be removed from office, Speaker of the House Nancy Pelosi remains unmoved in her decision to not do so.

In an appearance on Jimmy Kimmel Live on Thursday, Pelosi said that she's not ready to impeach Trump until there's an ironclad case against him – and to her, that hasn't happened yet.

"I think the president wants us to impeach him," Pelosi explained to Kimmel. "He knows it's not a good idea to be impeached, but the silver lining for him is then, he believes, that he would be exonerated by the United States Senate... So when we go through with our case, it's got to be ironclad. Ironclad."

She believes that if the House moves to impeach Trump, the Republican majority Senate could acquit him.

Warren clearly disagrees. In her Medium post on Friday, she seemed adamant in her belief that impeachment is possible.

“If Donald Trump were anyone other than the President of the United States, he would be in handcuffs and indicted,” Warren wrote. “No matter what he may think, Donald Trump is not a King. No President is. And our democracy only works if everyone can be held accountable.”

More like this
The Chauvin trial is incapable of delivering real justice
By Vanessa Taylor
Um, Biden's big immigration deal seems pretty similar to Trump's
By AJ Dellinger
John Cornyn is either incredibly dumb, incredibly craven, or incredibly both
By Rafi Schwartz
Stay up to date