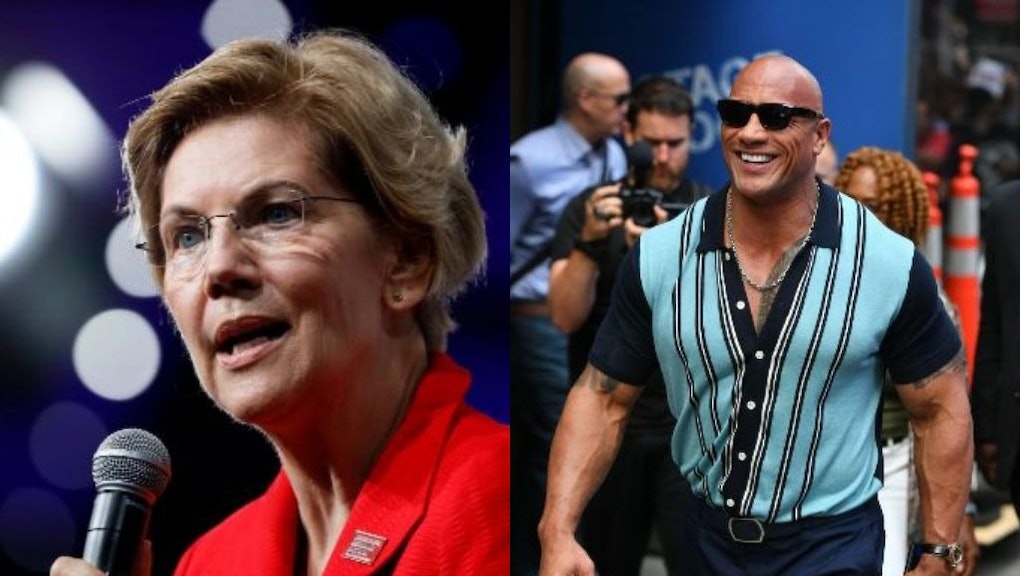 Elizabeth Warren and The Rock are really into each other

Elizabeth Warren and Dwayne “The Rock” Johnson are two very different kinds of famous people. Johnson just married his longtime partner Lauren Hashian and finished the press tour for his film Hobbes and Shaw — which earned more than $400 million worldwide. Meanwhile, Senator Elizabeth Warren is several months into her 2020 presidential campaign, sitting at third place in the national polls, behind Former Vice President Joe Biden and Senator Bernie Sanders. But despite having very different skill sets and areas of expertise, Johnson and Warren deeply admire each other’s work.

On Sunday night, Warren tweeted out that she was watching the fifth and final season premiere of HBO show Ballers with her husband, Bruce H. Mann. The show stars Johnson as a retired NFL player who starts a second career as a financial manager for other NFL players. It’s dramatic, it’s funny, and Democratic hopeful Elizabeth Warren really loves it.

“Can’t wait for the Season 5 premiere of @BallersHBO tonight (Bruce and I still can't believe there won't be a Season 6),” Warren wrote. “And congrats @TheRock on your marriage!”

And that love apparently goes both ways. In the season five premiere of Ballers, Johnsons’ character Spencer Strasmore can be seen holding Warren’s 2017 book This Fight is Our Fight, in which Warren lays out the reasons and ways to fight for the middle class.

This isn’t the first time that Warren and Johnson’s mutual admiration has been on display. In 2017, when the Writers Guild of America was contemplating a strike, Warren issued her support of the guild – linking it to her love of Ballers.

“I stand with the Writers Guild of America for fair pay and decent health care because it’s the right thing to do—and because Bruce and I can’t wait for the next season of “Ballers” to start,” Warren said at the time, according to Vanity Fair. That time, Johnson tweeted out thanks for Warren’s support.

It’s a bit strange to see such an odd but enduring two-way fandom between a fiscally progressive presidential candidate and an international action movie star, but it’s also kind of sweet?

More like this
8 shows like 'Ted Lasso' to watch if you need more feel-good TV
By Brandon Yu
This restaurant's viral anti-vax stance is a sad, predictable sign of our culture wars
By Brandon Yu
Issa Rae, Lil Nas X, and J-Lo just gave us a masterclass in social media
By Keith Nelson Jr.
Stay up to date