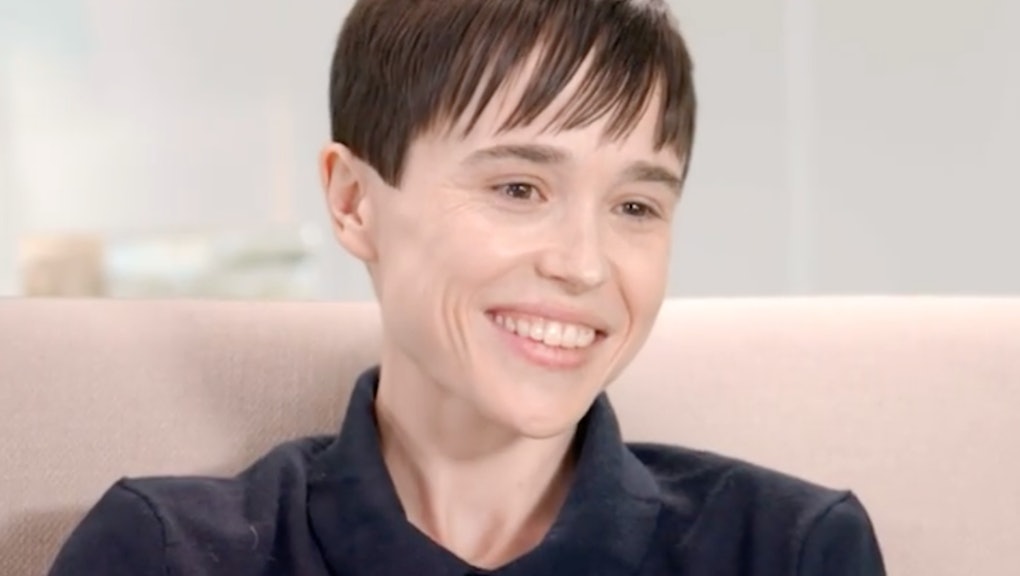 An interview between Oprah Winfrey and Elliot Page premieres on Apple TV+ this Friday. It’s the first buzzy celebrity sit-down with the unimpeachable talk show queen since her bombshell special with Prince Harry and Meghan Markle in March, when they outed the Royals as racists. It’s also the actor’s first on-camera interview since Page disclosed he was transgender in a moving statement last December.

In a conversation with trans journalist Thomas Page McBee for Vanity Fair, however, the star made it clear he isn’t seeking attention for himself, necessarily. “I don’t want it to sound like, ‘Look at me.’ It’s not that at all. Actually, I was really nervous,” Page said of the Winfrey interview. But coming out had made the actor the most recognizable trans masculine person in the world. “I thought about it for a bit, and it just felt like, okay, the GOP basically wants to destroy the lives of trans kids and stop the Equality Act. How do you not use this platform?”

When he became the first trans man to cover Time magazine in March, Page told the publication that accessing gender-affirming healthcare had been “not only life-changing but lifesaving.” Elaborating in conversation with McBee, the Umbrella Academy actor said it’s been complicated balancing the euphoria of finally feeling at ease with himself against the transphobic politics of the moment. “My feelings aren’t really linear,” Page said. “I feel emerging joy and excitement one moment, and then in the next, profound sadness reading about people wanting to take gender-affirming healthcare away from children.”

In the trailer for the Apple TV+ interview, Winfrey asks Page whether there was an "aha moment" that inspired him to disclose his identity publicly. The actor again centers the Republican onslaught against LGBTQ+ rights: "In the time we're in right now, and especially with this, you know, horrible backlash we're seeing towards trans people, particularly trans youth, it felt imperative to do so," Page says.

“The backlash right now is so intense,” he elaborated, talking to McBee. “The rhetoric coming from anti-trans activists and anti-LGBTQ activists — it’s devastating. These bills are going to be responsible for the death of children. It is that simple.” That’s why it felt like talking to Winfrey — detailing his own experience and highlighting the importance of all sorts of care, from therapy to surgery — was so urgent.

It’s a chance for Page to reach a mainstream audience, since according to a recent PBS-Marist poll, nearly 70% of Americans across the ideological spectrum oppose the anti-trans legislation sweeping the nation. The actor encourages people to educate themselves about bills in their state and consult the ACLU, the National Center for Transgender Equality and Transathlete.

Talking about his journey is also a way for Page to hopefully reach other trans people who might be struggling, to tell them they are not alone. “I feel so grateful to be at this place in my life, and I want to use the strength I have to help in all the ways that I can,” Page told McBee. “I think it’s about: How can I feel grateful for my joy, and embrace my joy, and allow myself to have that joy — but then put that joy and that love into action?”