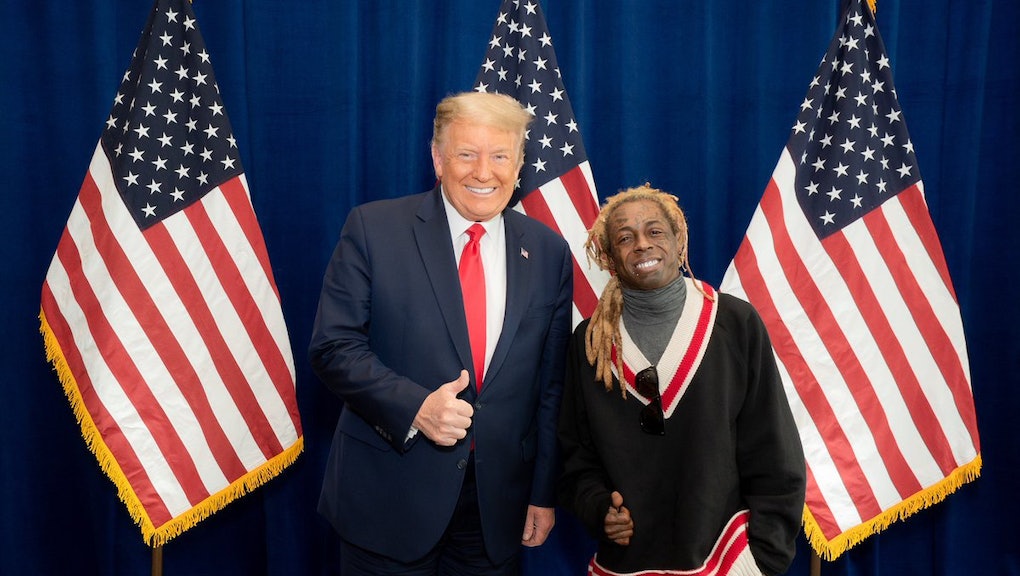 With just four days to go until election day, Donald Trump is scrambling to convince swing voters they ought to cast their ballot in his favor. One of his highest-profile tactics lately: recruiting support from famous rappers in an attempt to court Black voters. But Trump only drew eight percent of the Black vote in 2016, meaning it’s really unlikely an endorsement from Lil Wayne, for example, will tip the scales in his favor.

On that note: Lil Wayne drew a fair amount of ire late Thursday, after he shared a photo of himself and the president mugging and giving thumbs-up in front of some American flags. The dynamic duo had a private meeting after an event in Miami where Trump talked his plan for Black economic empowerment — branded the “Platinum Plan” for some inscrutable reason, like a freaking credit card or something.

To be fair, the Trump administration has done some good work in the criminal justice sphere — largely thanks to the lobbying of Kim Kardashian West. But claims that his administration has by-and-large done more for Black Americans than any president since Lincoln are frankly unhinged. The sixteenth leader of our nation issued the Emancipation Proclamation, freeing enslaved people. The 45th man in charge is working really, really hard to suppress the voice of the people. Plus, he’s willfully ignoring a pandemic that disproportionately infects and kills minority and low-income citizens. Sure, Trump has done a lot for Black people — a whole lot of bad and insidious stuff maybe.

Facts aside, the president is doing his very best to court last-minute Black voters by highlighting former athletes and, more recently, big-name rap stars who supposedly support him. After complaining that he thought Biden would raise his taxes, rapper 50 Cent briefly said he backed Trump in a profanity-laden Instagram post. But he later walked back his endorsement — maybe because his ex Chelsea Handler offered to pay his taxes if he voted for Biden. As she put it to Jimmy Fallon a few days ago: "I had to remind him that he was a Black person, so he can't vote for Donald Trump, and that he shouldn't be influencing an entire swath of people who may listen to him because he's worried about his own personal pocketbook.”

Also touted by the current administration as being on the Trump train: rapper Ice Cube. The president’s campaign advisor Katrina Pierson tweeted a “shoutout” publicly thanking Cube for helping shape the “Platinum Plan.” The rapper later went on an Atlanta radio station to clarify that no, he’s not a Trump supporter. He’s just a guy looking to enact change regardless of ideology: "We can't be looking for a lesser evil, they all evil," Cube argued. "We have to push our program and make people do what we need them to do."

There’s been a bit of hand-wringing lately about how rap music was framed as a foil to conservatism back in the 1990s, but now rappers are becoming Republicans themselves. That’s not entirely accurate. Sure, a handful of artists have been labeled as friendly with Trump lately. But by-and-large he’s still incredibly unpopular with Black Americans. No celebrity, no matter how many millions of followers they have, will likely change that at this point.