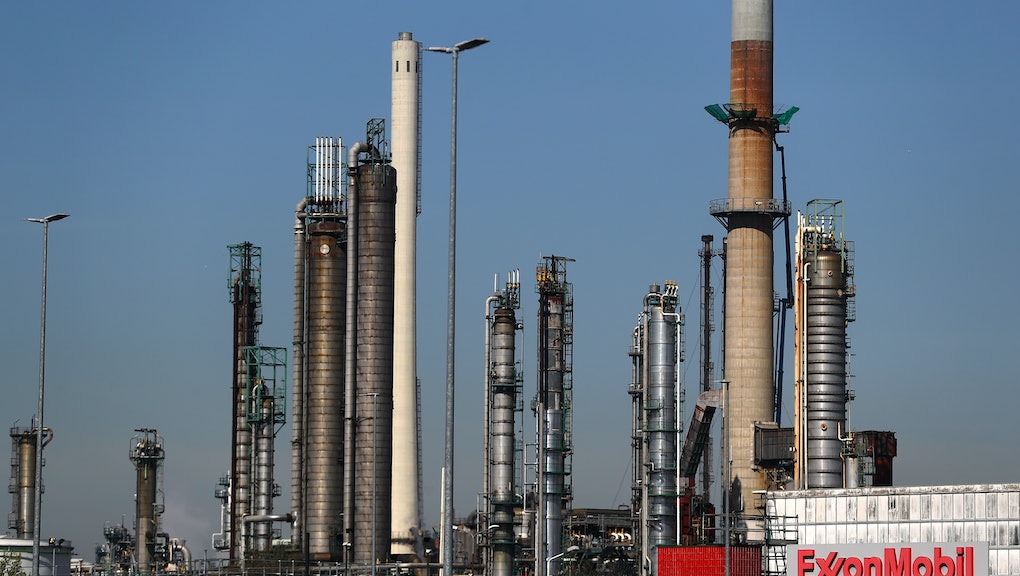 On Monday, ExxonMobil announced plans to reduce its greenhouse gas emissions to reach the targets laid out in the Paris Agreement by 2025. Not a bad goal! The problem, however, is that Exxon has worded its PR-friendly announcement in such a way that it is actually meaningless, and in fact leaves the door open for the company to expand its drilling and oil production.

The sticking point lies in the wording. In the announcement, Exxon repeatedly promised to reduce the intensity of its greenhouse gas emissions by 2025. But lowering the intensity of emissions doesn't mean actually lowering emissions. As a report from Reuters points out, the company didn't set an emissions target as a limit, which gives Exxon free range to continue increasing emissions and its impact on the environment all while pretending they're reducing something.

This type of shallow promise isn't terribly surprising coming from Exxon, a company with a history of brushing aside the climate crisis. An investigation in 2015 revealed that the oil giant knew about climate change nearly 40 years ago and, instead of helping the public do something about it, launched a misinformation campaign to downplay the issue. The report found that the company spent an estimated $30 million on sowing climate denial amongst the public. Exxon rejected the findings from the investigation.

But Exxon's climate sins aren't just in the past, of course. This is the same corporation that leaked documents revealed in October was planning to add 21 million metric tons of CO2 to the atmosphere every year for the next five years. And just this month, Exxon put a carbon capture project on hold — a project that could have made an entire oil field carbon-neutral. Last year, the company pledged to produce more than one-million oil barrels per day in the Permian Basin by 2024.

"Exxon plans to up its production by 1 million barrels per day over the next 5 years," Carbon Tracker's Andrew Grant told Grist. "Reducing a minority of its lifecycle emissions by a small sliver is the thinnest of fig leaves for a big increase in overall emissions and a bet on continued business as usual."

Exxon did not respond to Mic's request for comment.

Exxon has felt pressure recently from shareholders's demands to switch to cleaner fuels and install new board members who can better address the company's approach to climate change. But its attempt to appease its investors and critics is lackluster even when compared to promises made by other Big Oil companies. In August, BP surprised critics with its plans to become carbon neutral by 2050 by halting oil expansion in new countries and actually lowering the company's oil production, which would drop its carbon emissions by 30-35 percent by 2030. Even Shell has pledged to go net-zero by 2050 by shifting to selling more clean energy products, though the company also focused on "emissions intensity" and failed to go as far as promising they would reduce or stop drilling.

Exxon's CEO, Darren Woods, has been quoted calling the green efforts from his Big Oil peers a "beauty contest" that lacked true impact.

"Individual companies setting targets and then selling assets to another company so that their portfolio has a different carbon intensity has not solved the problem for the world," Woods said at an Exxon analyst meeting on March 5. He said he wanted the company to take steps to "solve the problem for society as a whole and not try and get into a beauty competition."

But with disingenuous PR shows like this one, putting on a little make-up for the competition is all Exxon has managed to do.