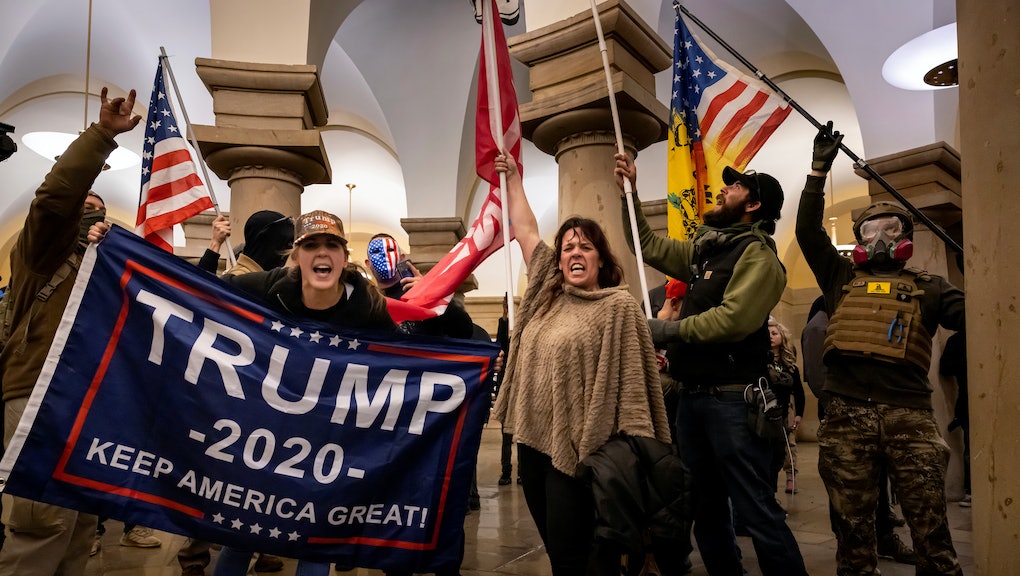 As the dust cleared following the insurrection attempt at the Capitol on Jan. 6, a lot of attention turned to social media, where much of the organizing for the riot took place. Parler, a far-right Twitter clone, attracted the most attention, while Facebook attempted to downplay its connections to the attack on democracy. But a new report from Forbes analyzing the charging documents filed against people who were arrested for participating in the riot found that Facebook played a much larger role than the company would like to admit.

Using data collected by the Program on Extremism at the George Washington University, which has collected more than 200 charging documents that refer to 223 individuals who were involved in the siege, Forbes found that Facebook was far and away the most commonly referenced social network. Facebook was mentioned in 73 documents, including references to posts, messages, and live-streams that occurred on the platform. The Facebook-owned Instagram was additionally referenced 20 times. YouTube was the second-most referenced platform, receiving 24 separate mentions. Parler was referenced in just eight charging documents.

According to the analysis, the content associated with Facebook included public posts and private messages that showed people planning their attendance of the "Save America" rally, which former President Donald Trump spoke at. Some of the messages and posts reportedly contained threats of violence, which falls in line with reporting that has highlighted calls for uprisings and other violent rhetoric that appeared across Facebook prior to the Capitol siege. While Facebook claimed to be addressing the issue by applying fact-check labels to posts that falsely questioned the legitimacy of the election, it wasn't until after the insurrection attempt that the platform started removing Stop the Steal content altogether.

When contacted regarding the charging documents that mention Facebook, a spokesperson for the company told Mic, "We are continuing our ongoing, proactive outreach to law enforcement and have worked to quickly provide responses to valid legal requests. We are removing content, disabling accounts, and working with law enforcement to protect against direct threats to public safety."

Facebook's leadership has largely downplayed the company's role in the events of Jan. 6. In an interview with Reuters in the days following, company COO Sheryl Sandberg said, "Our enforcement is never perfect so I'm sure there were still things on Facebook," but noted, "I think these events were largely organized on platforms that don’t have our abilities to stop hate, don’t have our standards, and don’t have our transparency.” Despite that, Facebook has confirmed that it is preserving messages and posts from users who discussed the "Save America" rally and the Capitol riot and is providing that content to the FBI.

The fact that Facebook appeared regularly in charging documents is not an impeachable indicator that the platform is responsible for the Capitol riot. It seems clear that Parler was perhaps the platform where organizers and insurrectionists were most active; Facebook, on the other hand, is a mainstream platform that is much more widely used than Parler. It would make sense that Facebook might be referenced more than Parler simply because more people use it.

A report from Gizmodo supports the theory that Parler was more actively used for riot planning. The reporters used GPS coordinates from Parler posts to place users in and around the Capitol building during the riot, while court filings made by Amazon, whose web services hosted Parler, show that users of the platform were active in organizing the riot and calling for violence against elected officials and political opponents. As independent journalist and security expert Marcy Wheeler points out, the fact that Facebook was the most referenced platform doesn't necessarily mean it was most prominent in organizing the events, but rather that it is the most widely used social network period and the one that made it easiest to identify rioters. After all, users on Facebook typically use their real names and other personally-identifying information.

While the charging documents don’t prove Facebook to be the biggest driver of the Capitol riots, it’s certainly a significant indicator that the platform played a larger role than the company has acknowledged. As Angelo Carusone, CEO of progressive watchdog group Media Matters, told Salon, "If you took Parler out of the equation, you would still almost certainly have what happened at the Capitol. If you took Facebook out of the equation before that, you would not."

More like this
Why is Facebook this confused over letting Donald Trump back?
By Rafi Schwartz
Instagram now lets you add pronouns to your profile. Here's how to do it
By AJ Dellinger
Elon Musk has finally realized Bitcoin is awful for the environment
By AJ Dellinger
Stay up to date