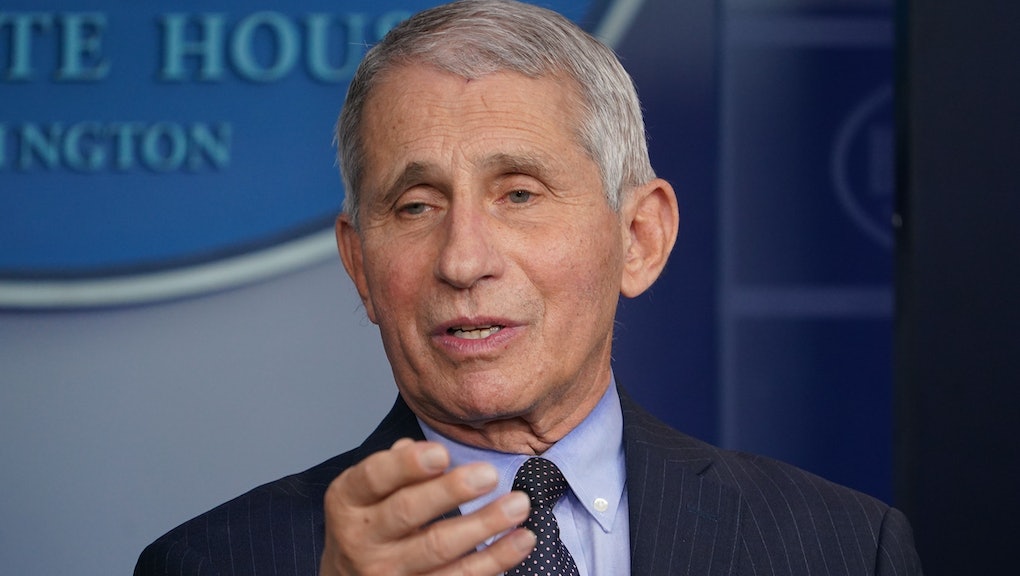 Fauci pushes for vaccine rollouts to prioritize people of color

Now that President Joe Biden is inaugurated, the United States is looking to him to boost vaccine rollouts throughout the country. Namely, people are hoping he'll follow through on promises to vaccinate 100 million people in his first 100 days in office. But as more information comes out about who has received the vaccine so far, stark racial disparities are becoming clear. On Wednesday, Dr. Anthony Fauci pushed for vaccine rollouts to prioritize people of color, citing the pandemic's disproportionate impact on their communities.

Former President Donald Trump and his administration's rollout of the coronavirus vaccine left a lot to be desired. Trump didn't even meet his own projections to vaccinate 20 million people by the end of 2020. And last week, one source familiar with the transition told CNN that Biden's administration wasn't even inheriting a plan from Trump, telling the outlet, "There is nothing for us to rework. We are going to have to build everything from scratch."

But in those efforts to rebuild from scratch, the Biden administration needs to reconsider who is being prioritized. During an interview with the New England Journal of Medicine, Fauci, the director of the National Institute of Allergy and Infectious Diseases and Biden's chief medical advisor, said, "I think that's one thing we really got to be careful of. We don't want in the beginning that most of the people who are getting [the vaccine] are otherwise, well, middle-class white people."

Unfortunately, that's exactly how things are unfolding right now. Sixteen states have released vaccinate data by race, Axios reported, and in every one of them, white people people have been vaccinated at rates that are often two or three times higher than those of Black people. For example, NBC Philadelphia reported earlier this month that almost 120,000 white people were vaccinated in Pennsylvania compared to less than 4,000 Black people. There were about 60,000 vaccinations where race wasn't listed but, even then, the issue is clear.

There's a number of reasons as to why these disparities exist. As Fauci himself mentioned, communities of color have historical reasons to distrust the medical industry. He said, "They keep coming back and saying the history of Tuskegee. They don't, can't, and should not forget about it, because it happened and it was shameful." Indeed, when Mic interviewed Black Americans about medical distrust and the coronavirus vaccine, each person mentioned the lasting impact of the Tuskegee syphilis experiment.

In preparation for vaccine rollout, the experts Mic previously spoke with mentioned the need for campaigns and resources that acknowledged this history, without demanding people of color forget it. Shawn Demmons, a trans activist who works in the University of California at San Francisco's Center for AIDS Prevention Studies, said there needed to be a "huge public health campaign, possibly utilizing social influencers or other trusted personalities". He also pointed out the need for community education that would include providing information on the vaccine's development and safety in layperson's terms. Yet, that hasn't really happened.

Earlier this month, Biden announced the American Rescue Plan, his $1.9 trillion package to address the pandemic. Part of that included $20 million to juice vaccine distribution. While the American Rescue Plan acknowledges that communities of color have been disproportionately impacted by the pandemic in a number of ways, it's obvious that the administration needs to come up with a very clear and precise plan that includes working with communities directly to prioritize their survival.