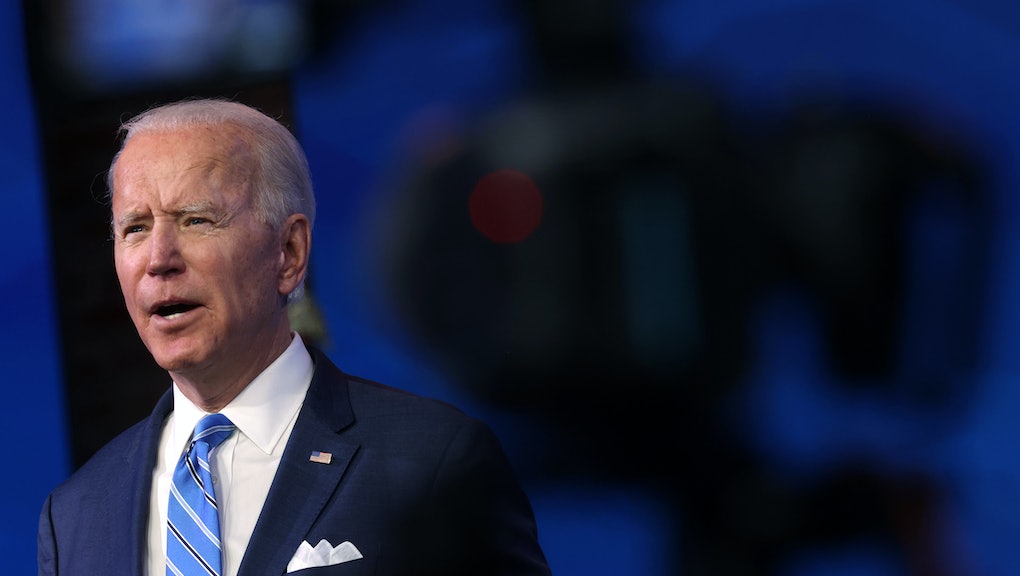 For almost a year now, President Trump and his administration have horribly mismanaged the coronavirus pandemic. With the incoming of President-elect Joe Biden, many Americans are hoping that his administration will not only provide solely needed economic relief, but step up the United States's handling of the pandemic overall. And with Biden's announcement this week of a $1.9 trillion package to address the pandemic, it seems some long overdue changes are finally on their way.

On Thursday, Biden unveiled his strategy, dubbed the American Rescue Plan, in an evening address. Described by Biden's team as an "aggressive, two-step plan," it draws from Congress's original CARES Act passed in March 2020 and from the $900 billion package passed in December. Notably, neither of those packages were as big as Democrats wanted. In fact, the second coronavirus relief package almost didn't happen and only passed after being significantly scaled back to get support from Senate Republicans.

A number of the points in Biden's plan involve simply extending existing benefits. For example, the 15% increase in food stamp benefits was set to expire in June, but Biden's plan would extend it to September. The plan also includes another $25 billion in rental assistance, in addition to the $25 billion that Congress passed in December, and increases unemployment aid to $400 per week, a $100 weekly increase from the enhancement that Congress included in its December package.

All of these things are good to see and will help support much-needed programs. But right now, most people are thinking about immediate relief, a.k.a. direct stimulus checks. And given that the Trump administration failed to meet its own vaccination projections, many are wondering how the Biden will handle vaccine distribution.

In the past, Biden has criticized the Trump administration's handling of coronavirus vaccines. Officials from Operation Warp Speed claimed the U.S. would vaccinate 20 million people by the end of 2020, but the U.S. is currently far behind its own projected vaccination schedule. There's a number of reasons for why the U.S.'s unforgivable lag, but the main one is that both Pfizer/BioNTech and Moderna's vaccines require two doses, so the Trump administration is actually holding half of all vaccines back to ensure that everyone who received the first dose will be able to recieve the second one quickly as well. Earlier this week, Biden announced that he plans to ditch that policy.

But most troublingly, there was just a lack of planning on the Trump administration's part. Money was poured into developing the vaccines, but not so much into their distribution. Instead, the onus of distributing vaccines was placed onto individual states, whose health departments are already over-burdened from the pandemic. In addition, Congress only included $9 billion for vaccine distributions in its latest relief package, and many states said the aid may be too late.

In order to boost distribution, Biden will allocate $20 billion for a national vaccine distribution plan. A senior transition official told The Hill, "The states are scrambling. There was really no plan to get needles in arms. And there's been very little coordination, so we're going to do just the opposite," adding, "I think it's clear that what we're inheriting from the Trump administration is much worse than we could have imagined. There's no existing infrastructure for vaccinations."

Biden already pledged to get 100 million people vaccinated within the first 100 days of his administration. Doing so means he will employ a strategy that the Trump administration hasn't utilized so far: mass vaccination events, which includes using churches, community centers, and other large buildings to vaccinate a bunch of people at once. This strategy has already been recommended by public health experts like Dr. Jonathan Reiner, a professor of medicine and surgery at George Washington University, who told CNN in December, "We need to be vaccinating about 2 million people a day ... as opposed to the 150,000 people a day. And I just don't see the urgency. We need to go into mass vaccination mode, and we need to do it now."

When it comes to stimulus payments, Biden's plan is an improvement on Congress's last round of only $600 checks, which many said were not nearly enough to help. Instead, many hoped for a $2,000 stimulus payment, and now it seems that Biden will retroactively provide that amount. Per his plan, an additional $1,400 will be sent out to people. So when combined with Congress' $600, it comes to a total of $2,000.

This plan for stimulus payments isn't perfect. In November, the Economic Security Project organized 127 economists to sign an open letter urging Congress to not only pass another round of checks but make recurring direct payments. On Friday, the Main Street Alliance, Small Business for America's Future, Small Business Majority, and American Independent Business Alliance signed an open letter calling for Biden to consider recurring stimulus payments, as doing so will support small businesses.

"The economic impact of the continued COVID-19 recession will mean that spending necessary to the survival of small businesses continues to be out of reach for many families," the organizations wrote. "That's why we're calling for recurring cash payments to families until the economy recovers, as the most practical support for small businesses facing unforeseen challenges and an unknown future."