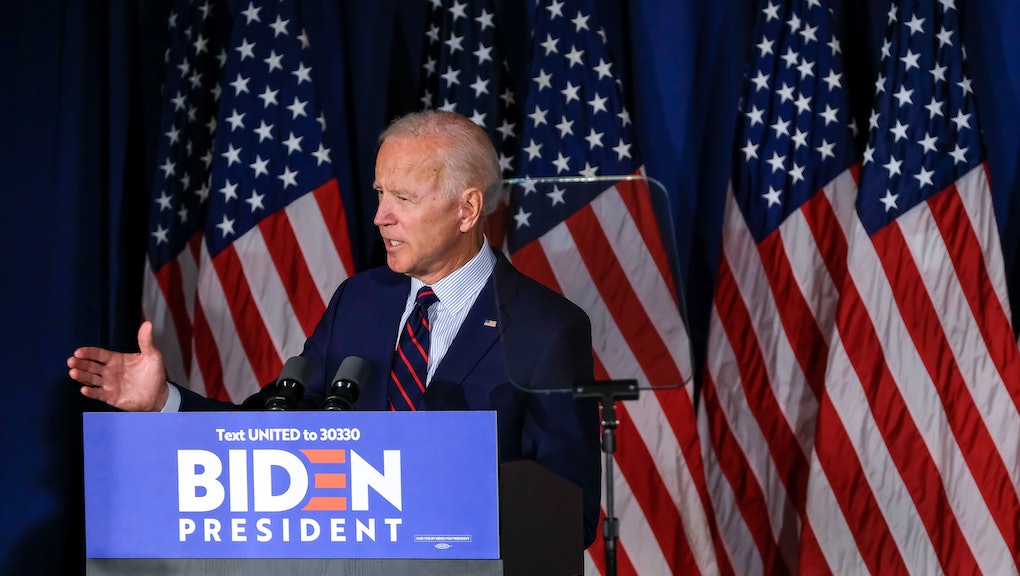 Remember the September debate, when the Democratic stage featured only 10 people? The number of candidates on stage ought to decrease as time goes on; as voters, that’s the kind of arithmetic we love to see. But at the fourth Democratic debate Tuesday in Ohio, the field will be up to 12 participants, after Tom Steyer, the California billionaire, and Rep. Tulsi Gabbard, the Hawaii congresswoman with unorthodox foreign policy views, qualified in addition to the previous 10 candidates.

President Trump’s Ukraine scandal may be dominating political headlines lately, as details continue to trickle out from the House’s impeachment inquiry. But lest you forget: There’s an election happening. The first votes will be cast in the 2020 election in less than four months, and in a crowded Democratic field any way a candidate can stand out is sure to help their cause. Their next best opportunity to make a splash is at Tuesday’s debate — so here’s what to look out for.

1. Can Biden put his own spin on the Ukraine scandal?

A lot has happened for Vice President Joe Biden since the last debate, as he’s become embroiled in the biggest news story of the year. Trump is facing an impeachment inquiry after trying to influence Ukraine to investigate Biden’s son Hunter. For Trump, the question is whether he inappropriately used aid funds as leverage to pressure a foreign country to do his bidding, but for Biden it’s a matter of whether his son’s questionable decision to accept a position on the board of a Ukrainian gas company while Biden was leading Ukraine policy for the Obama administration will give him the whiff of impropriety too.

To be clear: There is no evidence of wrongdoing on the part of the elder Biden. In an interview with ABC News that aired Tuesday morning, Hunter said he showed “poor judgment” in his dealings with Ukraine, but denied any “ethical lapses.” But since the House impeachment inquiry began a few weeks ago, the president and the right-wing media establishment have maintained a steady assault on Biden’s character, asserting that he tried to improperly stymie an investigation into the gas company Hunter was involved with while serving as vice president. While there is zero evidence of this — and it reeks of an attempt to shift the spotlight away from President Trump’s obvious misdeeds — Biden still needs to come out of the gate with a forceful and clear denial of any wrongdoing in order to take over control of the narrative. Better still would be if he can make clear that the claims against him are laughably thin, and are evidence of Trump’s malice instead of his own missteps.

Biden also needs to position himself as the leader of the pack when it comes to impeachment. After sitting on the sidelines while many of his 2020 rivals have sounded the impeachment alarm, Biden only recently endorsed the move. Still, as the target of both disingenuous media smears and a covert foreign influence campaign by the president, he should be able to make a strong moral case. Biden has struggled with clarity and cohesion at vital points in the campaign so far — but this would be an especially dangerous time for him to do so.

2. Can Warren sustain her autumn surge?

Biden was once the solid frontrunner of the Democrats’ crowded 2020 pack, but Massachusetts Sen. Elizabeth Warren has taken a slow and steady approach that appears to be positioning her to possibly win the race. Warren has overtaken Biden in many state and national polls, and riding a wave of good press and detailed policy proposals, she’s positioned herself as a palatable option for both the left and moderate wings of the Democratic party. She’s also shown that she’s capable of debate-friendly zingers, like her instantly viral and absolutely cutting response to Maryland Rep. John Delaney in defense of her unabashedly progressive platform.

Warren’s future success depends on her being able to maintain that momentum by making sure she gets a lot of air time Tuesday. Previously, she’s occasionally found herself relegated to long stretches of silence, but at this crucial moment, she needs to dominate the stage from a position of strength and show that it’s a two-person race between her and Biden at the top. Of course, as one of the frontrunners, she should also be ready to face more fire from both her right and left, as the campaign moves into the tooth-and-nail phase. Just this morning, South Bend Mayor Pete Buttigieg released an ad attacking Warren and Vermont Sen. Bernie Sanders over Medicare-for-All. It’s worth wondering, too, if Sanders himself may also finally stop pulling punches with his friend Warren; the non-aggression pact between the campaign’s most prominent leftists appears to be drawing to a close, if Sanders’s recent comments questioning Warren’s capitalist sensibilities are any indication.

3. Team Bernie says their candidate is healthy. Will voters be soothed?

Sanders, meanwhile, has some ground to make up. He was the second-place candidate through much of the summer — albeit distantly so, given Biden’s healthy early lead — but he’s found himself lagging behind a surging Warren as the weeks have passed. Now, following a recent heart attack and surgery, Sanders has slid further in some polls. His campaign has stated that he is in good health, and the candidate himself has already been back on camera discussing his progress, but the incident seems to have rattled some voters. Tellingly, Sanders pledged to release his medical records, including details of his heart procedure, “as soon as we can,” showing he’s determined to present voters with a clean bill of health.

A good sign for Sanders amidst all this is that he continues to dominate in fundraising even as his polling momentum has waned. If Sanders wants to stay solidly in the race, he needs to overcome any lingering concerns about his age and stamina. For one thing, it might be helpful for him to point out that at 78, he’s only two years older than Biden, and he’s joined in the septuagenarian category by the 70-year-old Warren as well. The more time he speaks on stage, appearing confident, capable, and fierce as ever, the better it will be for him to move past his medical hiccup.

As for what he should say: From a tactical standpoint, continuing to draw clear distinctions between himself and Warren is a good start. Her rise in the polls seems to have come at his expense, and with the first primary votes only a few months away, he can’t afford to let her share the left-wing mantle with him.

4. How will the middle-tier candidates stand out on an even more crowded stage?

The rest of the pack will generally be fighting over the same limited resource: time. But there are a few specific flash points to watch out for. Gun control has recently emerged as a source of contention between Buttigieg and former Texas Rep. Beto O’Rourke, who’s made the topic his signature issue after a shooting in his hometown of El Paso in August. The South Bend mayor called O’Rourke’s proposed gun buyback program a “shiny object” meant to distract voters, prompting the Texas representative to accuse Buttigieg of “[representing] a kind of politics that is focused on poll-testing and focus group-driving and triangulating and listening to consultants, before you arrive at a position."

Expect the two men to rehash this squabble as they seek a viral moment that could help them break out from the muddled middle and win them a few sympathetic headlines. O’Rourke has also raised some hackles with his calls to end tax exemptions for right-wing churches that don’t support gay marriage, with Buttigieg as well as Warren questioning the move. The Texan has backtracked somewhat on the claim, but if it comes up Tuesday, expect it to receive strong pushback from others concerned that he’s wading into a political minefield without much of an upside. A fiery moment might additionally entice some other stalled candidates, like California Sen. Kamala Harris or New Jersey Sen. Cory Booker, to take advantage and try to land a defining blow — especially if they can do so against one of their buzzier rivals.

The dark horse to watch out for is Steyer, making his first national debate appearance. He’s a self-funded billionaire who’s been aggressively pushing for impeachment over the past two years. Now that the impeachment process has actually begun, expect him to double down. Considering his wealth, he’s got practically nothing to lose and everything to gain — his best option is to go for the jugular with strident attacks against the top contenders, hopefully netting him a viral moment.

Steyer is only on the stage because his deep pockets funded an unrelenting ad campaign designed precisely to meet the Democratic National Committee’s debate qualifications. He’s said he’s willing to spend up to $100 million on his longshot run. If he manages to deliver a meaningful performance at Tuesday’s debate, he’ll be in a strong position to capitalize on it, considering that he’s built a massive email list from his impeachment activism. While other candidates debate their policies, look for Steyer to stay laser-focused on Trump.