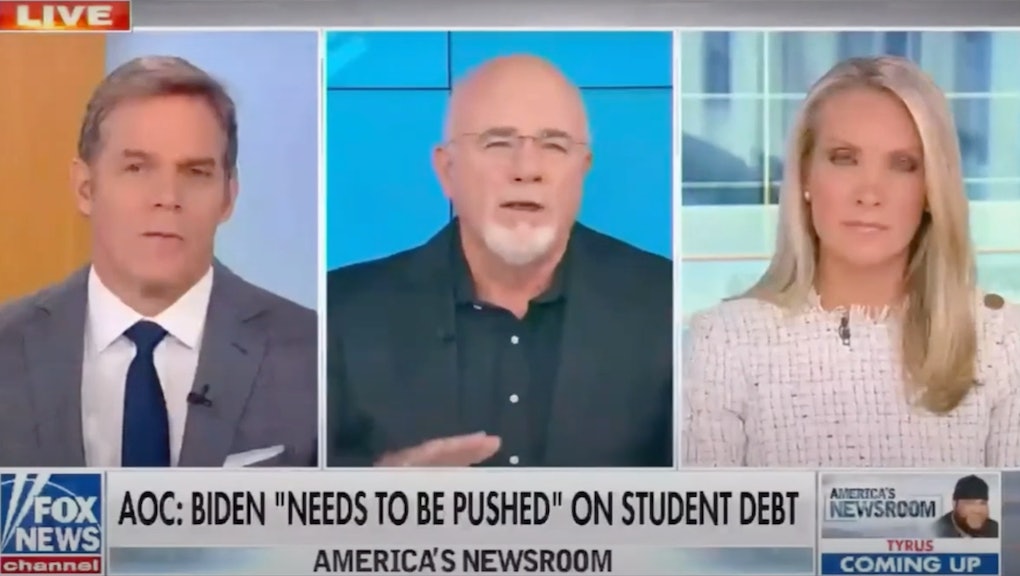 He's not exactly a household name, but within the cottage industry of celebrity financial advisers (your Suze Ormans, Jim Cramers, etc,) Dave Ramsey is a big deal, thanks to an eponymous radio program, bestselling books, and a three-year stint hosting his own TV show on Fox Business, all of which have helped land him a net worth estimated to approach half a billion dollars.

So when Ramsey talks about money, people — well, some people — tend to listen. Which is a shame, because as he demonstrated during a Thursday morning appearance on Fox News, he's also pretty awful.

The conversation ostensibly began with Ramsey, whose whole thing is not racking up debt, raging against reports that the Biden administration is considering cancelling up to $50,000 in individual student loan debts — a move that could benefit more than 40 million Americans whose total student debt is in the ballpark of $1.5 trillion. Ramsey insisted that the idea that student debt forgiveness will help ease America's pandemic-induced financial crisis is "economic hogwash."

Again: Ramsey has a net worth approaching $500 million.

But the really bad stuff came next, when Ramsey began to rail against the idea of pandemic stimulus checks. Because, he explained, "if $600 or $1,400 changes your life, you were pretty much screwed already."

Ramsey then went on to list the "other issues" he thinks are likely at play if you're in a situation where a check worth 0.0029% of his estimated net worth could be life-changing: "You have a career problem, you have a debt problem, you have a relationship problem, you have a mental health problem, or something else is going on if $600 changes your life," he rattled off, insisting somehow that "that's not talking down to folks."

The problem here seems to be twofold. First, Ramsey apparently can't imagine a world in which money he'd consider chump change could actually be life-changing. And to a degree, he's right, in so much as a single $600 check or even a $1,400 check is just a drop in the ocean for many people suffering financially.

Secondly, assume all those "issues" he listed were indeed at play here ... so what? Does someone's relationship or job situation (or lack thereof) or mental health mean they're somehow unworthy of the unfathomably minimal financial boost being discussed by the government in response to the worst economic and health-related crises of the past century? Of course not. And despite Ramsey's insistence that he's not "talking down" to folks, simply inserting these (undeservedly) taboo states of being into the conversation is a way for him to position himself as the arbiter of what is "good" poverty and what is "bad" poverty. And what he's decided is that people living in the "bad" kind of poverty are unfit for aid.

Are stimulus checks a universal panacea for the economic instability and inequality that the pandemic has exacerbated over the past year? Of course not. But to write them off as being unhelpful out of hand is either snobbery or cruelty — or more likely, a little bit of both.

More like this
The real reasons employees aren't rushing back to work
By Noah Berlatsky
FEMA said it would reimburse cities for housing homeless people. Most cities ignored the offer
By AJ Dellinger
The CDC's eviction freeze has been unfrozen by a federal judge
By Rafi Schwartz
Stay up to date