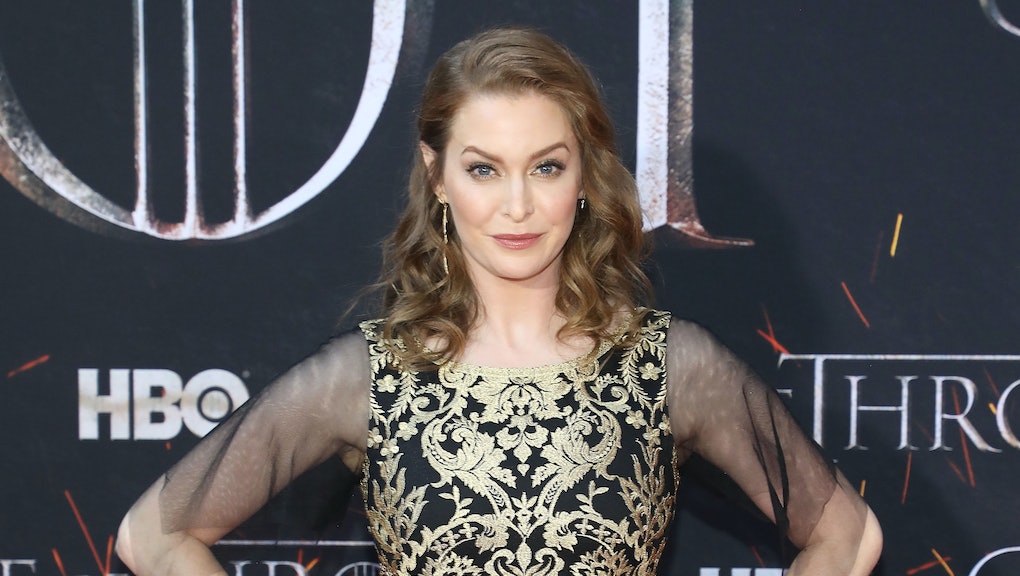 It’s so gross to think about how much reprehensible (and frankly, criminal) behavior Marilyn Manson got away with, if the allegations are true, because everyone assumed his “bad boy” image was an act. It turns out, when somebody repeatedly tells the world they’re an abusive misogynist, you should believe them. “He’s told the world time and time again, ‘This is who I am,’” said Game of Thrones actress Esmé Bianco, the latest in a string of victims to name Manson as their abuser, in a lengthy and harrowing account published in The Cut on Wednesday. “He hid in plain sight.”

"I was coerced, I was defrauded, I was transported from the U.K. to the U.S., I was harbored, and then I was coerced into involuntarily servitude, which included sexual abuse and physical abuse," Bianco told Good Morning America on Thursday.

Bianco’s relationship with Manson occurred from 2005 to 2011. Just like Phoebe Bridgers once was, the actress was a massive Manson fan as a teen growing up in London in the late ‘90s. At 16, she was grappling with a friend’s recent suicide and found catharsis in Manson’s dark and twisted music. Bianco had the singer’s face plastered on her bedroom walls and taped to her lunchbox.

Bianco got to meet her idol in 2005, when she was modeling and doing burlesque, through Manson’s then-fiancée, Dita Von Teese. Four years later, the singer asked Bianco to star in the music video for his song “I Want to Kill You Like They Do in the Movies.” Manson flew her to L.A. for the shoot — which quickly became nightmarish. He didn’t let her sleep or eat for three days, serving up cocaine instead of food. It was the first time Manson violently assaulted her, she said. “He wanted to shoot the finale of the video, and he locked me in his bedroom, and he tied me to a wooden prayer kneeler,” Bianco told Good Morning America on Thursday. “I was half-naked, and he beat me with a whip. And he filmed it.”

Bianco’s friends back in London tried to tell her Manson was out of line. Her former roommate, Hannah Fox, who’d managed a fetish nightclub insisted a BDSM film shouldn’t require real injury. But Bianco convinced herself she and Manson were making art. Meanwhile, he was grooming her, insisting they were soulmates showering her with compliments, even texting: “You look really beautiful on the footage that we shot on the kneeler.” They began a long-distance affair. “I thought he was in love with me. I did not understand that what was happening to me was very, very wrong,” Bianco told GMA. “He was incredibly manipulative.”

She says the real nightmare began two years later, when Manson asked Bianco to move in with him in L.A. After a brief honeymoon period, he became incredibly controlling. He demanded she wear short pencil dresses and stockings and dictated her sleep schedule. Since Manson was basically nocturnal, everyone around him kept those hours, too. His personal assistant would serve him “breakfast in bed,” which was a glass of absinthe and a line of cocaine, around 7 p.m.

Bianco recalled Manson once repeatedly cut her torso with a knife. “I just remember laying there, and I didn’t fight it,” she told The Cut. “It was kind of this final-straw moment where I had lost all sense of hope and safety.” The months of violence culminated in one terrifying incident: “He thought I had put cockroaches in the walls to mess with him. And he took an axe and started smashing holes in the walls, and then he started chasing me with the axe. And at that point, I thought he’s going to kill me,” Bianco told GMA.

Bianco escaped Manson in June 2011, but it took years for her to name her experience as abuse. Now, she says, "He deserves to be behind bars for the rest of his life." With California's statute of limitations for prosecution of crimes like this recently extended (thanks to Wood and Bianco's lobbying), Manson's conviction may come to fruition. Bianco's lawyer told The Cut his client was interviewed by the FBI and gave them evidence related to human trafficking and sex crimes.

Bianco says coming forward is a "massive relief," but she still worries about Manson retaliating. She hopes her story empowers other victims to speak up. "I want people who are in this situation right now to know they're not alone," Bianco told GMA. "And it's not their fault."

More like this
The first frustrating roadblock in Marilyn Manson’s sexual assault lawsuit is here
By Chloe Stillwell
How many times must victims relive their trauma in the Larry Nassar case?
By Chloe Stillwell
A mother and daughter have been charged with murder after performing a back alley butt lift
By Melissa Pandika
Stay up to date