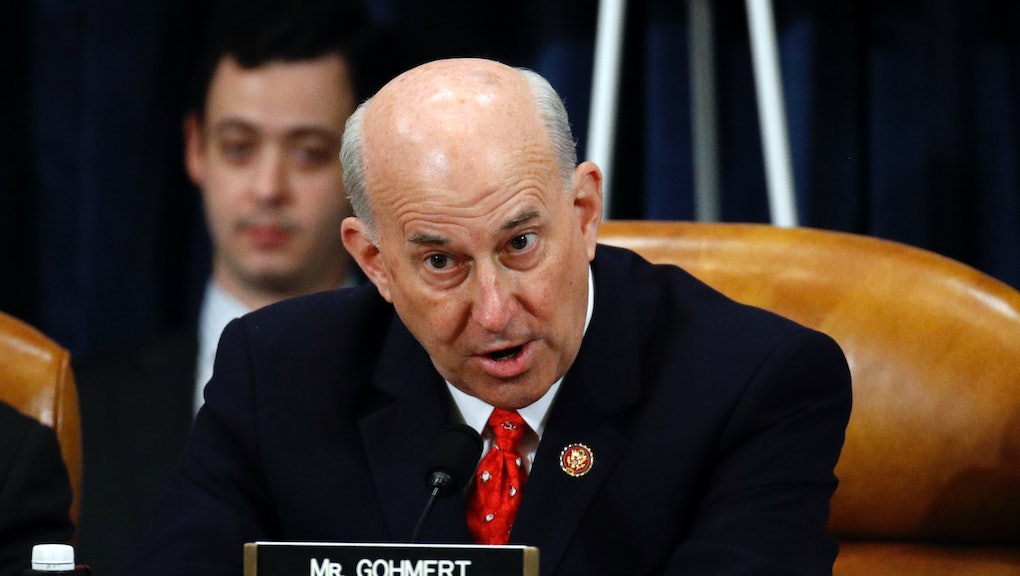 Let's be very clear here: Texas Republican Rep. Louie Gohmert is not a serious person. He's a powerful person, sure, in the "I'm a well-known member of Congress" sort of way. But serious? No. He believes in the sort of idiotic conspiracy theories that usually come with ads for brain pills on YouTube. He says bigoted things, enthusiastically. He worries about gay space colonies dooming the human race. He's the sort of guy you'd expect to find yelling at some poor 17-year-old minimum wage retail worker because the local Target doesn't have his preferred brand of khaki pants.

Unfortunately, the good people of Texas's 1st Congressional District have nevertheless decided that his is the (loud, inarticulate) voice they want representing them in the U.S. House of Representatives, which means Gohmert can — for the time being at least — do things like ask a career Agriculture Department official whether the National Forest Service can do anything about those pesky galactic forces which push the moon around the Earth, and the Earth around the sun.

Speaking with Jennifer Eberlien, the associate deputy chief of the National Forest System, during a House Natural Resources Committee hearing this week, Gohmert mused aloud about tackling climate change (which he doesn't really believe in anyway) by simply messing around our planet's lunar and solar orbits. Piece of cake!

"Is there anything that the National Forest Service or [Bureau of Land Management] can do to change the course of the moon's orbit or the Earth's orbit around the sun?" Gohmert asked Eberlien in what is either the greatest deadpan joke of all time, or a painful peek inside the creaky clockwork gears the congressman keeps grinding away inside his skull. "Obviously, they would have profound effects on our climate."

Speaking of "great deadpanning," Eberlien's reply that "I would have to follow up with you on that one, Mr. Gohmert" belongs in Jamestown, New York, at the National Comedy Center. Yeah, I'm sure she's gonna get right on it.

Why Gohmert thinks the National Forest Service or Bureau of Land Management would be the correct federal agencies with proper jurisdiction over the laws of physics is anyone's guess. But for a guy who represents the party of small government, I think, if nothing else, "messing with the entire goddamned moon" is probably a pretty clear-cut example of federal overreach.

More like this
Greta Thunberg calls out G7 leaders for their frivolous and wasteful meeting on climate change
By AJ Dellinger
Another reason to legalize weed: It'll be better for the environment
By AJ Dellinger
Marjorie Taylor Greene rejects the "so-called science" of evolution
By Rafi Schwartz
Stay up to date