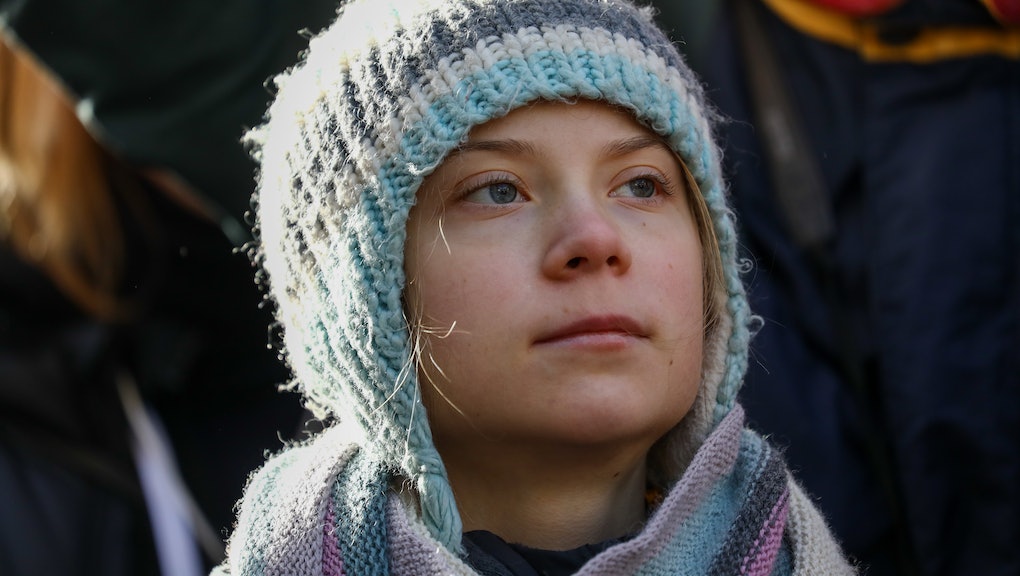 2019 was the year of Greta Thunberg. The 17-year-old environmental activist became the youngest person individual to be named Time Magazine's Person of the Year, was given dozens of awards (and turned some down) including Sweden's Right Livelihood Award and was front and center in the conversation about addressing climate change — providing an unshakeable message that calls on world leaders to make changes or risk dooming future generations. It appears her impact is likely to carry on into the new decade as well: it was announced on Monday that Greta Thunberg was nominated for the 2020 Nobel Peace Prize.

Jens Holm and Hakan Svenneling, two members of Sweden’s Left Party, cast their votes for Thunberg, putting her on the shortlist of people who will be eligible to win the historic honor. The lawmakers noted that they gave Thunberg their vote because she “has worked hard to make politicians open their eyes to the climate crisis.” They also noted that “action for reducing our emissions and complying with the Paris Agreement is therefore also an act of making peace," according to the Associated Press.

This is the second time Thunberg has been nominated for the Nobel Peace Prize, following a nod given to her in 2019. At the time, she was nominated by three members of Norwegian parliament for her role in leading a new generation into climate activism. While she is far from the only young climate activist, Thunberg has become the most globally recognized face of climate activism, particularly for young people. She has spoken in front of world leaders at just about every major gathering including COP25 in Chile, the World Economic Forum in Davos, Switzerland, and the United Nations' General Assembly in New York City — shaming them for inaction at every turn and providing blistering speeches that have earned her some detractors and even more supporters.

Perhaps Thunberg's biggest impact has been her leadership on climate strikes — major, worldwide events that have resulted in millions of students leaving school and marching in the streets, demanding politicians take them seriously and provide real solutions to climate change. Two major climate strikes took place in 2019: one in March that drew more than 1.4 million protesters and one in September that drew a record amount of attention. More than 5,225 demonstrations in 163 countries took place across the globe and drew more than four million attendees. The movement was spawned in part by Thunberg and her #FridaysForFuture movement, which she has been partaking in for more than one year now.

Thunberg was one of 301 candidates for the Nobel Peace Prize in 2019 and will likely face a similarly sized field for 2020 — though she has become an even larger presence in the time since that first nomination. If she were to win, she would be tied for the youngest person ever to take home the award. Malala Yousafzai also won the Prize when she was just 17 years old, the same age as Thunberg. Whether Thunberg wins or not is largely inconsequential to her mission: she will continue her activism with our without praise and recognition until world leaders show they are serious about addressing climate change.