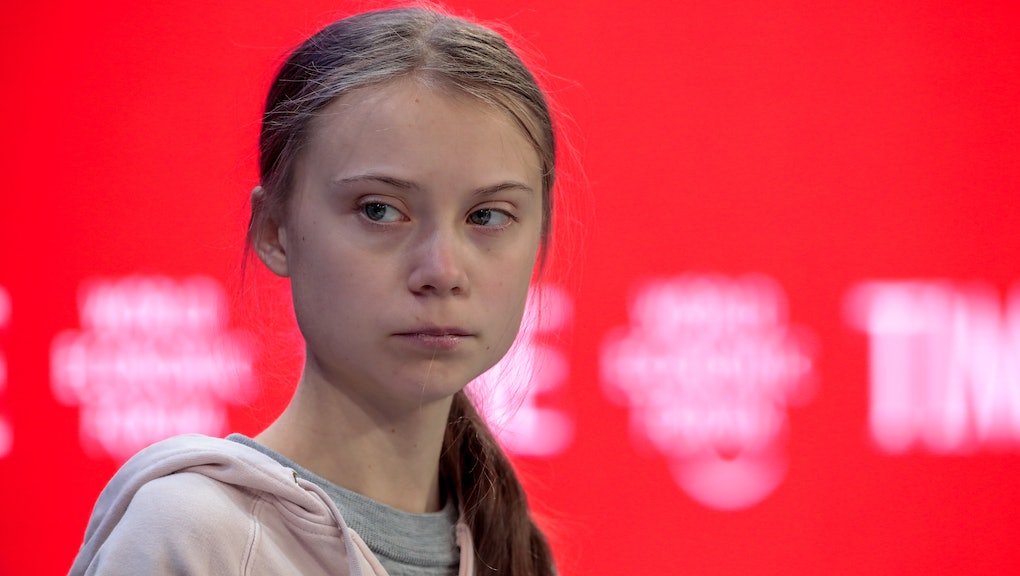 The adults in power continue to disappoint the future generations of the world. At this year's World Economic Forum, held annually in Davos, Switzerland, Greta Thunberg was invited to speak to an audience of political leaders and business tycoons at a forum where thousands of members convene to discuss entrepreneurship and global issues that impact both the public and businesses. Essentially, it was the perfect place for Thunberg to call them out on their inaction on climate change.

In her speech, at an event joint-hosted by The New York Times, Thunberg — in her characteristic, straight-to-the-point way that has hurt the feelings of some adults — expressed disdain toward the powerful leaders and businessmen who have made empty promises to concerned youths.

"You say children shouldn’t worry," Thunberg said. "You say: 'Just leave this to us. We will fix this, we promise we won’t let you down. Don’t be so pessimistic.' And then, nothing. Silence. Or something worse than silence. Empty words and promises which give the impression that sufficient action is being taken."

However, sufficient action isn't happening at all. In fact, it's the opposite; reports from researchers and scientists have revealed that carbon emission levels reached a record high in 2019 and are predicted to continue rising well into the 2020s at this rate. Progress to cut down carbon emissions to reach the goals outlined in the Paris Agreement has been too slow, scientists have warned, and warring politics continue to threaten any small improvements made during the past year.

But politics, Thunberg insisted, should not distract leaders from addressing climate change. "[T]his is not about right or left," she explained. "We couldn’t care less about your party politics. From a sustainability perspective, the right, the left, as well as the center have all failed. No political ideology or economic structure has been able to tackle the climate and environmental emergency and create a cohesive and sustainable world."

Her words came shortly after U.S. President Donald Trump dismissed climate change concerns during his own speech at the World Economic Forum. According to CNN, he called environmental activists "prophets of doom" and "the errors of yesterday's fortune tellers" whose words dragged down everyone else.

In 2019, the United States officially withdrew from the Paris Agreement due to the president's concerns that adhering to its standards would undermine the U.S. Instead, the U.S. has announced an initiative to plant one trillion trees by 2050 to ease environmental concerns.

Thunberg didn't call out President Trump in her speech. Instead, she asked other global leaders to look at their own efforts as well as the efforts of others. "The fact that the U.S.A. is leaving the Paris accord seems to outrage and worry everyone, and it should," she said. "But the fact that we’re all about to fail the commitments you signed up for in the Paris Agreement doesn’t seem to bother the people in power even the least."

Thunberg admits that the goal of stopping global carbon emissions is difficult. But she claims it isn't impossible. "We’re not telling you to rely on technologies that don’t even exist today at scale and that science says perhaps never will," she said. "It will be hard. And unless we start facing this now together, with all cards on the table, we won’t be able to solve this in time."

In her speech, she asked that companies, world leaders, and other governmental institutions strive to "end all fossil fuel subsidies," "divest from fossil fuels," and "halt all investments in fossil fuel exploration and extraction."

These actions must be taken now, she noted, not by 2050. Thunberg also called out the large companies who were dodging the zero emissions goal by using 'offsets' and terms like 'carbon neutrality.'

"We are not telling you to keep talking about reaching 'net zero emissions' or 'carbon neutrality' by cheating and fiddling around with numbers. We are not telling you to 'offset your emissions' by just paying someone else to plant trees in places like Africa while at the same time forests like the Amazon are being slaughtered at an infinitely higher rate." Although planting trees helps, said Thunberg, it's not enough and isn't any better than actually, truly, cutting carbon emissions.

"Let’s be clear," she continued. "We don’t need a 'low carbon economy.' We don’t need to 'lower emissions.' Our emissions have to stop if we are to stay below the 1.5-degree target. And, until we have the technologies that at scale can put our emissions to minus, then we must forget about net zero. We need real zero."

Thunberg closed her speech by telling global leaders, corporate business owners, and governments to not give up. Giving up would be disastrous for future generations of the world, she continued, who would have to deal with increasingly chaotic weather and the economic pressure these disasters would place on the people of every nation.

"I wonder, what will you tell your children was the reason to fail and leave them facing a climate chaos that you knowingly brought upon them? That it seemed so bad for the economy that we decided to resign the idea of securing future living conditions without even trying?

"Our house is still on fire. Your inaction is fueling the flames by the hour. And we are telling you to act as if you loved your children above all else."