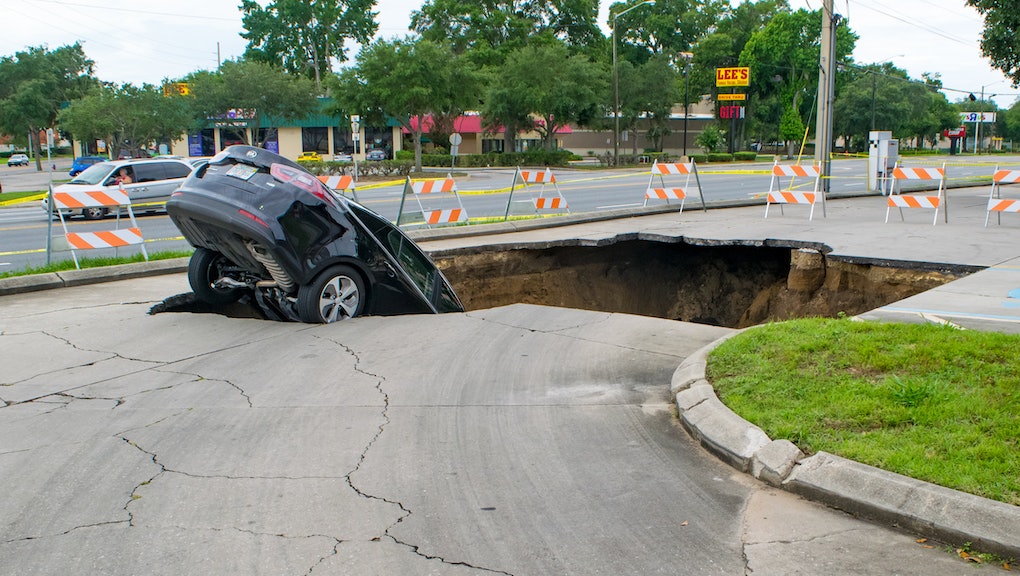 Happy New Year, the ground is sinking under you

The dominant feeling of 2020 was that of sinking. At times, it felt like the whole Earth might open up underneath our feet and just suck us into the abyss. According to a terrifying new study, over the next few decades that sensation just might become a reality. Published in the journal Science last week, the report predicts as much as eight percent of the Earth's ground surface could be impacted by subsidence, or gradual caving in or sinking, by the year 2040.

Researchers performed a large-scale, systematic review of scientific literature on land subsidence to determine some of the most common causes of the phenomenon. They then used spatial and statistical analyses to build a model that can project future instances of sinking based on historical trends, expected stressors that could exacerbate the problem, and other patterns that could contribute to the planetary equivalent of Extreme Home Makeover.

The model projects that as much as 4.6 million of Earth's 196.9 million square miles could be affected in the next two decades. While that might sound like just a fraction of the planet's surface area, the problem is where it will be happening. According to the researchers, as many as 22 percent of the world's 7,343 major cities — that's 1,596 in total — are projected to be in the sinking zone. That puts 635 million people at risk.

The impact of subsidence does not spare any part of the world, but researchers project it will be felt most in Asia. The model projects that 86 percent of people expected to be affected by land sinking live in the region, with India and China bearing the largest burden of potential subsidence.

North America and Europe are only expected to experience a combined nine percent of total subsidence over the next two decades, but that does not mean that the damage won't be significant. The model suggests that 57 percent of all cities that fall within zones that expect to experience sinking are located in flood-prone areas. That risk is made worse by the ground-shifting experience and could lead to more potentially damaging effects, particularly as climate change continues to bring about more extreme weather events. This is particularly troubling in the US, where flooding on the coasts has led to state and federal government agencies pushing to move entire cities inward to avoid the devastating effects of storms.

While the threat of ground slowly sinking is currently more theoretical for much of the world, it's very much already happening for some. Take the city of Jakarta, Indonesia, which is home to more than 10 million people. The capital city and coastal metropolis has been sinking about 10 inches per year. Unless something is done, and it's not entirely clear what could stop the trend, 95 percent of North Jakarta is expected to be underwater by 2050. It's not alone, either. Major cities from Lagos to Houston are all starting to seep lower and lower.

It's worth noting that the cause of all of this sinking is not simply the natural course of things, but rather largely driven by human activity. Earthquakes and sinkholes certainly play a role, but the researchers found that oil extraction and groundwater usage are among the biggest predictors of subsidence. By restricting oil and gas extraction and clamping down on industries that consume massive amounts of water like agriculture, the risk of sinking into the Earth can be mitigated. If we can’t do that, let's be real, we probably deserve to be swallowed whole anyway.