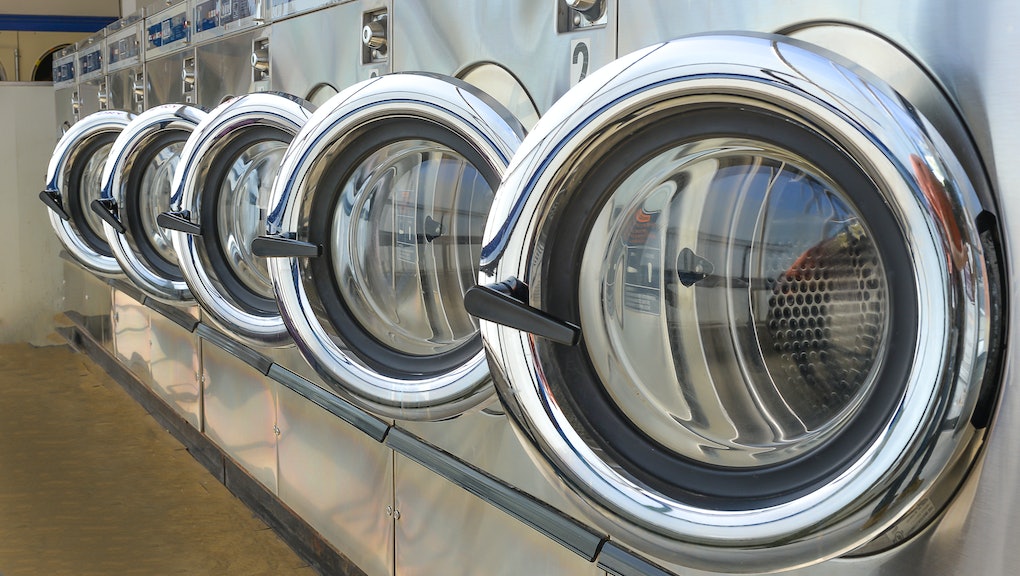 Here's a more eco-conscious way to do your laundry

Laundry is one of those tasks that you just can't get around. It has to be done, and there is really only one widely available way to go about it — a method that requires the use of soap, potentially hazardous chemicals and carries with it a considerable amount of environmental impact. For the socially conscious, this creates a precarious position. We have to wash our clothes, but is there a more eco-conscious way to do laundry when we do?

It all starts with your clothes

The first step of lessening the impact of your laundry is taking a long, hard look at what exactly it is you are washing. The popularity of fast fashion — the cheap, trendy style of clothes that you see at stores like H&M, Forever 21 and Zara, among other major retailers like Target and Walmart — has resulted in many closets being stocked with shirts, pants and other garments made of synthetic fibers. According to a recent report from the New York Times, more than 60 percent of fabric fibers are now synthetics. This has environmental consequences when it comes to the production of the clothes, as those synthetics are derived from fossil fuels, and when it comes to the end of the life of the garment, because it does not decay. It also carries a burden when you wash these clothes because the synthetic fabrics wear down quickly, so each wash is shortening the longevity of the piece of clothing.

Jim Hutchison, senior associate vice president, Knight Campus for Accelerating Scientific Impact at the University of Oregon, tells Mic that even as our time with these clothes gets shorter, the "use phase" — the phase in which we own, wear and care for these garments — is still the longest part of their lifespan, and it "dominates the environmental impacts." That is because each time we wash these pieces of clothing, the synthetic textiles release microplastics. It is estimated that as many as 640,000 to 1.5 million microfibers are released in every wash, according to a study published in Nature. While they are largely unnoticeable to us — microfibers usually measure less than 5 millimeters in length — they can often reach the ocean and other sources of water, where they accumulate and contribute to pollution. It is believed that most plastics in the ocean are not from products like straws or bags but rather these tiny shreds of plastic that add up over time.

The environmental impact of each wash

Of course, the more obvious source of waste and environmental harm is the actual task of doing laundry. As you might expect, there is a fair amount of water that goes into the process of washing your clothes. The Environmental Protection Agency (EPA) estimates that one load of laundry will use about 41 gallons of water. (For context, the average shower uses about 17 gallons of water.( On top of the water usage, there is the use of detergent, which typically contains chemicals that are harmful to the planet. Some of the chemicals can be toxic to aquatic life and damage the biodiversity of oceans. Many commercially available detergents don't biodegrade, resulting in a build up of harmful material that can contaminate water supplies and harm major waterways including rivers, streams and oceans. Then there's the amount of energy used in the process of drying your clothes. The Natural Resources Defense Council has warned that Americans spend about $9 billion per year in energy consumption just to dry clothes, in part because the process is very energy intensive.

It might feel like doing laundry in an environmentally friendly fashion is next to impossible, but there are some sure-fire ways to cut down on your impact with each wash. While some solutions are financially restrictive, others are relatively practical and viable practices that most people can implement in order to lower the burden placed on the planet without being uncomfortable in your own clothes.

How to wash less

One of the easiest ways to cut down on the impact of your laundry is to simply do laundry less often. This may sound excessively simple and silly, but there are alternatives for some to extend the life of their clothes before putting them through the wash. "One of the biggest things that consumers can do to reduce the use phase impacts is to wash clothes less," Hutchinson explains.

If you aren't participating in a labor-intensive activity that has you sweating or collecting dirt and germs on your clothes, you can give sunwashing a try. This is the simple process of hanging up your already worn clothing and allowing it to air out. It's best if you have an outdoor area to do this, but even if you don't, you can likely get more than one wear out of each piece of clothing without anyone being any the wiser. Each time you squeeze another use out of a garment, it's one less load of laundry, which means less water used, fewer chemicals and plastics sent into waterways and less energy being consumed. In addition to that, Hutchinson notes that choosing to wash your clothes less has the added benefit of extending their lifespan because "not washing reduces fiber breakdown that occurs during washing."

One of the appeals of fast fashion is that the clothing is typically quite cheap. But you often get what you pay for, as those garments don't last long and you'll be right back in the store to by a replacement. If you can swing it, make the investment up front to buy clothing that you like and is also durable.

To do this, start by looking at the tag when you're shopping for clothes. Synthetic, man-made fibers like polyester, acrylic, spandex and rayon are likely to wear out quicker than natural alternatives like cotton, wool, linen and silk. Those natural fibers should last longer, surviving more wears and more washes. Check things like how tough and heavy the garment feels — take a close look at the stitching to determine if it's high-quality, give it a few tugs to make sure it all holds together well, even hold the piece of clothing up to a light and see how dense it is. If it holds up well and doesn't look like it's basically just a see-through piece of fabric, you can likely trust that you'll be able to get some good use out of it.

Making these purchases can be difficult because the up-front cost is much more, but it's important to look past that initial price tag and think of the longevity of the item. You likely won't have to replace a pricier piece of clothing as quickly as the cheaper alternative. And by holding onto a garment for longer, Hutchinson explains, you're contributing less to the amount of pollution that goes into manufacturing and transporting clothes. "The longer you use a garment, the fewer you need, and the less impacts accrue from the manufacture and disposal of the garment," he says. You can also keep the cost down for you and extend the life cycle of a piece of clothing by checking out vintage and second-hand stores. These are great places to find pieces that aren't part of the fast-fashion trend and therefor typically more sturdy and durable. After all, the piece has already had a full life before getting to you, so you know it can hold up.

The best thing you can do if you own your own your own washer and dryer units is to buy efficient machines. Keep an eye out for machines with EnergyStar stickers on them to see which ones pass government-established tests for energy efficiency. The EPA advises that getting an efficient washing machine can reduce the water usage per load from 41 gallons to 28 gallons, saving the average household about 6,000 gallons of water used per year. When it comes to dryers, purchasing an energy-efficient model can cut back on energy consumption by about 20 percent or more per usage. Many of these dryers also come with features to prevent over-drying, cutting back on consumption and saving your clothes from unnecessary exposure to heat that can shorten their lifespan. As Hutchinson notes, even opting for these high efficiency options results in a fairly significant environmental impact, even if it is reduced from the alternative.

For those that don't have their own washer and dryer, there are ways to lessen the impact of the wash by purchasing environmentally friendly detergents. This can be easier said than done because if you walk into the store, you're likely to be confronted with all sorts of labels that claim the detergent is "all-natural" or "green." Those may be the right idea, but there is often no common definition for such terms, meaning there isn't necessarily a standard for those detergents to be held to. As noted by the Stanford Social Innovation Review, there is no such thing as a "green" product. A better label to look for is the EPA Safer Choice logo. There is a full database online of products that have this designation, and you can feel assured that those products meet an agreed upon standard established by the federal government. Many of these detergents use natural ingredients from plants rather than chemicals, which lessens the potential damage done when they wash into waterways. Hutchinson notes that some of these detergents also "do a better job of removing odor-causing bacteria and residues on the fabric that feed those bacteria," meaning you should theoretically get more use out of those clothes without feeling the need to wash them again immediately after your next use.

Of course, there's an even more energy-efficient way to dry your clothes: simply hanging them up to air dry. This cuts out any energy use associated with a dryer, as well as cuts down on any of the effects of drying that may damage or weaken your garments. It might not be the fastest method of getting your clothes to dry, but it is by far the most environmentally friendly option.