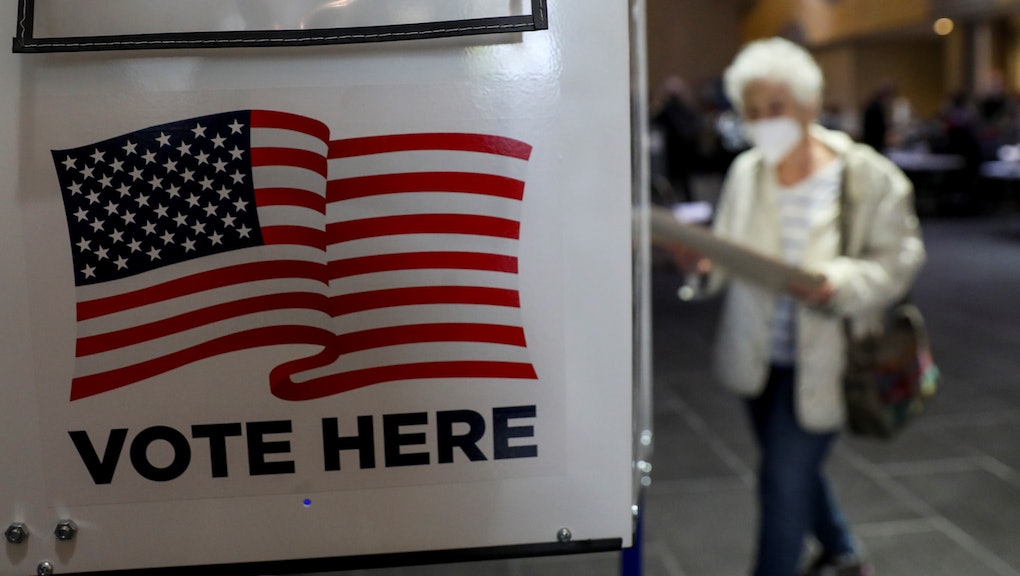 Here's what it would look like if America actually prioritized voting

This year, anything and everything voting-related has been intensified by the reality that we may finally be able to vote out the crisis of democracy that is the current presidential administration. The amount of marketing and publicity around voter registration, engagement, and participation has skyrocketed over the past year, with celebrities and public figures across genres and industries getting involved. This year’s election spending is projected to reach approximately $10.8 billion, according to the Center for Responsive Politics, on track to be the most expensive election cycle in history. Grassroots organizations have also been on top of their game, amplifying voter education efforts to keep voters just as engaged and aware about their local and state elections as they are about the presidential race.

As the headlines have shown us in recent weeks, though, the additional energy around voting is more of a necessity than a luxury, as examples of voter suppression and intimidation continue to crop up across the country. News outlets continue to publish images of dozens and dozens of voters waiting in long lines to cast their ballots, often painting them as inspirational scenes. Each snapshot is supposedly evidence of the everyday voter’s noble commitment to do whatever it takes to participate in our democracy.

But scenes like this, in reality, reflect an embarrassing failure of the U.S. government. For a country that prides itself on being a supposedly functioning participatory democracy in which citizens have the opportunity — nay, the responsibility — to directly elect the political representation of their choice, the actual act of voting is an overly complicated, suspiciously precarious act for countless Americans. If the right to vote is such a fundamental freedom of our democracy, why is it left up to the individual to figure out so much of the process?

Federal policies like the Voting Rights Act of 1965 were intended to do at least part of the work of protecting voters — particularly Black ones — and insulating them against the most common voter suppression and intimidation tactics of the time. But even that landmark legislation has suffered attacks since its passing more than 50 years ago. What would it look like if our country actually valued and prioritized voting — not just the one-time act, but long-term engagement, too?

Election Day would be a federal paid holiday

The fact that Election Day still isn’t a federal paid holiday is baffling. True, if we’ve learned anything this past summer, it’s that much of our country prefers to prioritize the economy over the wellbeing of the people who sustain it. But it still feels like an egregious oversight — in large part because of how straightforward and logical a solution it would be for so many people who struggle to turn out to the polls.

For many working Americans, the biggest challenge around getting to the polls is fitting it in around an existing work schedule. For voters who work between the hours of 9 a.m. and 5 p.m., they’re either relegated to waiting in the dreaded the early morning line before going to work, or confronting the evening rush on the way home. And if they aren’t able to vote during those congested timeframes, they might be forced to squeeze in a trip to the ballot box between meetings or over a lunch break — that is, if they have a paid break or can afford to take unpaid time.

For hourly workers, figuring out how to get to the polls can be even tougher. They might be able to avoid the morning and evening rushes depending on their shifts, but the unpredictability of the lines and how long they’ll have to wait is an especially tough gamble for workers who have strict work policies about clocking-in and clocking-out for shifts and lunch breaks. Some voters might prefer to take time off from work in order to practice their constitutional right without the stress of having to watch the clock, but many workers can’t afford to miss work. And they’re far less likely than salaried workers to have paid time off available to them in the first place.

Making Election Day a paid holiday would allow both full- and part-time workers to have the full day to get to the polls without sacrificing their income or jeopardizing their employment status. It’s almost boring to say because it’s just so straightforward. A paid federal holiday would include teachers too, which means some working parents might have the added challenge of figuring out childcare on Election Day. The lack of childcare options is one reason to vote itself — but for the sake of brainstorming here, I’d like to offer an addendum to the paid holiday idea: Polling stations should also have free temporary childcare for parents waiting in line.

Of the many injustices entrenched in our country’s prison system, one of the most overlooked is the fact that convicted felons lose their right to vote, often permanently. Some states chose to reinstate a person’s voting eligibility after they’ve been released from custody, but at times the restoration is contingent upon any outstanding fines being paid (a method of disenfranchising lower-income people) or after probation has been completed (which could cause someone to miss an election they should’ve been eligible to vote in).. Some lose the right to vote indefinitely, or require a governor’s pardon before they’re permitted to register to vote again. To add to the confusion, the rules differ from state to state; in Maine, Virginia, Vermont, and Washington, D.C., for example, convicted felons actually never lose their right to vote, even while incarcerated.

The benefits of guaranteeing the right to vote for all previously and currently incarcerated people are twofold. The first and most obvious benefit is that the opportunity to participate in democracy would not be jeopardized by a justice system that has demonstrated its own biases at nearly every level. The second benefit is less obvious, but no less important: Allowing previously and currently incarcerated people to vote communicates to them that they’re still active, valuable members of society. They’re still human beings who can play a role in the community around them. One of the chief functions of our current prison system is that it effectively invisibilizes and dehumanizes incarcerated populations, allowing the rest of society to more easily justify the abuses and loss of rights they often experience behind bars. In just a small way, guaranteeing the simple right to vote can help to combat that and decrease recidivism by restoring the dignity that incarceration attempts to steal away from people.

Free and accessible transportation to the polls would be guaranteed

Similar to the challenge of fitting a trip to the polls around an existing work schedule, figuring out affordable, reliable transportation to a voting location can be another logistical hurdle. In cities where public transportation exists, voters still have to manage the extra cost and inconvenience of the trip. And of course, if buses are delayed or specific subway lines are under construction, the entire process becomes more complicated — particularly if a working voter is on a time-crunch. In cities where public transportation either doesn’t exist or is very limited, or in areas where polling places are few and far between, getting to a voting site just to spend an unspecified amount of time waiting to vote is a headache big enough to deter someone from voting altogether.

Ensuring free and accessible transportation to the polls might mean offering free bus passes along with voter registration cards, or even making all public transportation free for all of Election Day. It might look like adding a section on voter registration cards that allows voters to indicate whether or not they need transportation support to safely and easily vote. It might look like polling stations providing a shuttle service to and from specific locations, or making organized carpool options easily available to people who might need them. Providing that peace of mind for voters ahead of time makes sure everyone, regardless of their socioeconomic status or where they live, can get to a polling station safely.

Providing feedback on the voting process would be easy and routine

It sounds silly, but offering voters more ways to provide feedback to their local boards of elections about their voting experience might be more illuminating than we realize. The history of voting in this country is marked by both violence and brutality, and by hard-earned victories. The best way to build an accurate measure of how well a particular voting set-up worked is to ask the voters, en masse, what it was like to vote. If we plan on maintaining that the right to vote is a foundational part of our democracy, then getting regular status updates on the condition of that right — whether it’s being threatened or jeopardized, how it could be improved or expanded — is a critical part of that work. The onus is on the government to ensure that people are able to safely, freely, and easily participate in the democratic process. Unless our political leadership makes voting access, education, and engagement a priority — and demonstrates that value in meaningful ways — a fully realized and thoroughly empowered democracy will remain just out of reach.

More like this
Oops, the Arizona recount the MAGA crew demanded actually took votes away from Trump
By Rafi Schwartz
This poll shows just how strong Trump's hold on Republican voters is
By AJ Dellinger
How the shock and confusion of 9/11 enabled our modern conspiracy era
By AJ Dellinger
Stay up to date