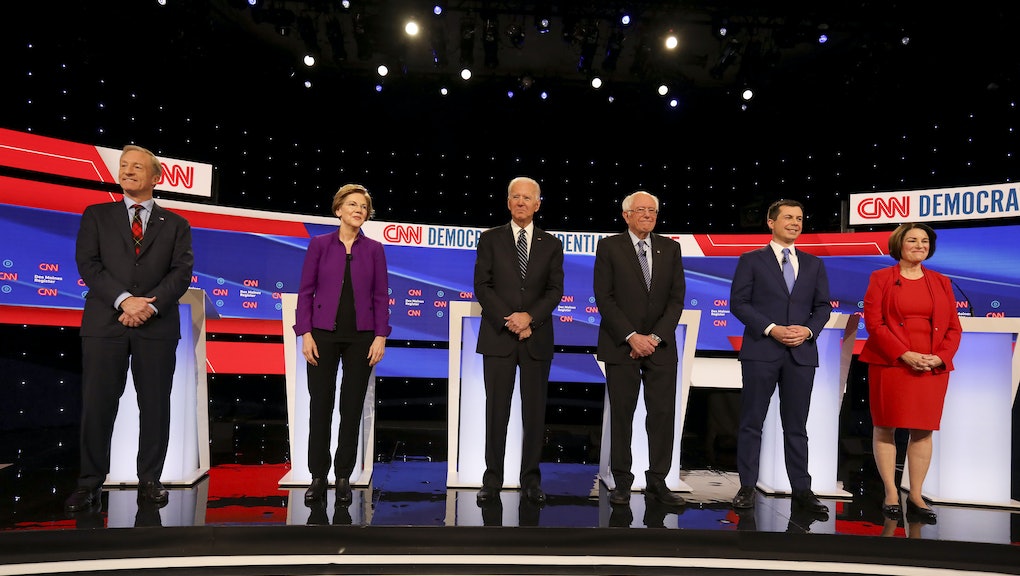 With the impeachment trial of President Trump officially underway, one way to remove the reality star president from office is already brewing. But while the 2020 election may seem right now like a glorified vanity project by too many high-profile Democrats — with a few serious candidates sprinkled in — the reality is that this fall at the ballot box is voters' real best chance to swap out Trump for a new president. This year, there will be a whole new crop of voters newly eligible to cast ballots, as the oldest members of Gen Z will be 18 for the first time during an election cycle. Their preferences can have a huge effect on who comes out on top in the presidential race — and now we have new data on who Gen Z voters want to win in 2020, thanks to a recent survey by writing service EduBirdie.

EduBirdie surveyed its Gen Z users — defined as those who were born in 1995 or later — about their candidate preferences and political priorities ahead of the 2020 race. Elizabeth Warren, the progressive senator from Massachusetts, emerged at the top of the pack per their survey, garnering 22% support. This tracks with previous reporting that student debt is a top issue of concern for young voters; Warren began her campaign with a comprehensive student debt forgiveness plan.

EduBirdie's own survey additionally found that 97% of Gen Z voters would rank the economy as one of their top three issues that will decide their vote. Education and health care followed thereafter, with 86% and 83% of voters saying those issues would be in their top three, respectively. Warren has signed on to the Medicare-for-All system championed by Vermont Sen. Bernie Sanders, though the two senators differ on how they'd fund their government-run health care systems.

In perhaps a surprising takeaway, the second-most popular candidate after Warren was tech entrepreneur Andrew Yang. Yang is running almost entirely on the idea of a instituting a universal basic income; his so-called "Freedom Dividend" would provide $1,000 monthly to every American citizen over the age of 18. It's a controversial idea, but one that certainly speaks to young voters' concerns about the economy and paying down debt. Nineteen percent of voters chose him as their preferred candidate in EduBirdie's survey.

Sanders came in third place with 17% support, followed by Pete Buttigieg, the former mayor of South Bend, Indiana, with 15% and Vice President Joe Biden with 13%. It's telling that Biden, who has long been leading the Democratic field, isn't the candidate of choice for young voters. His support has been shored up by the backing of older, more moderate Democratic voters as well as deeply entrenched support from Black Americans — something candidates like Buttigieg have struggled to earn.

Axios noted that Gen Z will comprise more than 10% of the electorate in 2020, and that nearly half of these voters will be non-white. Together with millennials, they'll make up more than one-third of voters this fall. That means courting young voters can be crucial for the Democrat looking to emerge from the crowded primary field and take on Trump in November.

And speaking of the incumbent, when voters were asked to choose between Trump and the five aforementioned Democratic candidates in EduBirdie's survey, the president garnered just 6% support. Warren once again led the pack in that scenario with 23%, followed closely behind by Yang with 22%.

The survey was conducted via emails to EduBirdie's customer database as well as through popups on its website, Avery Morgan, the service's director of communications, told Mic in an email. It reached 1,206 Gen Z voters.

In a press release provided to Mic, Morgan additionally shed light on how a writing service used by Gen Z students came to question its users' political leanings. "We’ve seen more content requests coming in for political work, and felt it was necessary to take a deep dive into the minds of Generation Z around these issues," he said in the release.

But while Gen Z voters might have strong preferences for some of the 2020 Democrats, it seems from EduBirdie's findings that many of them feel resigned to a different fate. Nearly half of respondents — 49% — said they believe Trump will be re-elected. Nearly three-quarters of voters (73%) additionally support the impeachment process against him, but just 41% believe he'll be convicted by the Senate and removed from office.