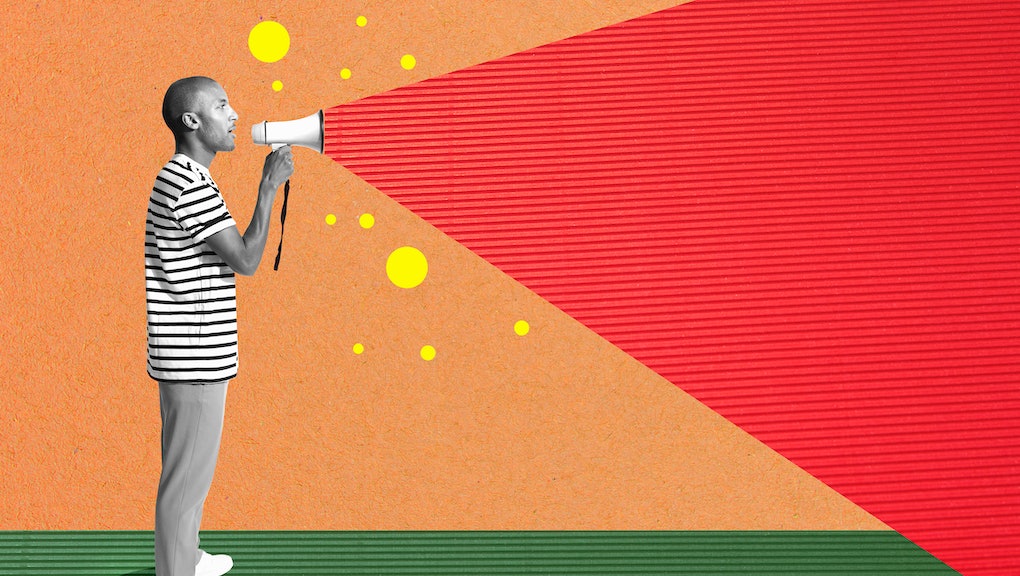 How do I come out for the second time?

My sister and I have a coded phrasing that we use when we discuss queerness around our parents. “When he called me ‘sweetie,’ I knew his shoes must be shiny,” my sister Loree will say, to avoid the inevitable winces from our religious kin. We both know what she means to imply about this guy’s sexual orientation with the whole shiny shoe cover. These verbal charades spill into allusions to my own gay identity as well — just to keep the peace. For someone who writes about curved dicks and lube on the regular, this is not ideal.

I came out to my parents when I was 16. I had never seen true, unadulterated shock from my mom until then, and this is a woman whom I've seen reach into almost-boiling water without flinching. In fact, my mother’s face during this announcement was so memorable that years later I drew it as my thesis project in a fine arts course and it made the teacher cry. So, just imagine.

Meanwhile, my father, who has an opinion about everything, hasn’t shared his yet — and it’s been 20 years. My folks, it appears, enacted a defense mechanism: Rather than acknowledge and work through my being openly queer, they have seemingly erased that day from their minds completely. They put me back in the closet. And to avoid the potential fallout, I stayed there. I thought doing so was best for everyone, but I recently realized how this was chipping away at my mental health. My anxiety is heightened at all times, because hiding an identity is uncomfortable and exhausting. The suppression was making me less confident in other areas of my life, too.

I want out of the closet — again. But how do I come out to loved ones for the second time?

In my search for the right approach, I consulted a queer, male therapist whom I figured might be able to relate to my experience. With him, I began exploring why I felt the desire to reaffirm my identity, which led to some fascinating analysis. “We tend to be attracted to partners that remind us of our caregivers, or partners [with whom] we can recreate the dynamic we had with them,” Michael Marquez, a Baltimore-based psychologist who specializes in working with LGBTQ+ people, tells me. For instance, he says, those with accepting and caring parents will tend to gravitate toward partners who are more emotionally warm and stable. Folx with disapproving parents, however, might find themselves in relationships that are “more emotionally volatile, codependent, or shame-based.”

This rings a bell. While loving in most ways, my parents are extremely distant in this single area (my sexual identity). This dynamic creates a chasm that I *do not* want to emulate in my romantic relationships. My dating history reveals that I’ve definitely fallen into this trap more than once, opting for men who are emotionally unavailable. Only recently have I broken the cycle with a man who is not trash (for me), and I would like to keep it that way. And that means reckoning with my relationship with my parents.

That said, knowing why I want to come out again doesn’t exactly make it easier. The very idea of actually saying the words, “I’m gay,” to my parents (even after saying them once before) gives me so much anxiety I can barely handle it — which leads me to question if it’s really worth it. Marquez confirms that this is completely normal. “When we feel anxiety, this can often activate our fight, flight, freeze, or fawn response,” he says. These feelings make it exponentially more challenging to figure out how to navigate the coming out process, no matter how many times you’ve done it.

Ultimately, though, Marquez says the decision largely comes down to how safe I feel having these conversations with people who are in denial. I currently live with my parents and if they have a bad reaction again, it could make my daily life even more uncomfortable.

Am I prepared for a potentially negative response? Have I thought through how it will impact me? I have the option of moving out if I need to, but for some folx — such as those who depend on the people they want to come out to for financial support or housing — these are especially important questions to ask. Marquez says if you’re in this boat, be sure to weigh your options and go with the safest one, if you feel you need to.

And if you don’t feel safe, there is no shame in staying in the closet. “Sometimes remaining in the closet is an adaptive survival strategy, and we need to be more compassionate and understanding toward anyone’s decision to not come out,” Marquez says. “It can cause someone a great deal of anxiety to come out to someone who could take away the support systems and resources that person needs to live.”

If coming out — regardless of whether it’s the first time doing so — feels too fraught, Marquez suggests focusing on finding acceptance elsewhere. “You may need to learn to let go of the need for acceptance from people who might not have the capacity for it,” he says. Deep.

But if you determine that you’re ready to have this conversation, Marquez recommends being direct and explicit. “I would let the person know what it would look like to support me and what exactly it means to be affirming of my identity,” he says, noting that this step requires a lot of emotional labor. That’s certainly the case for me; I can’t even imagine what a parent acknowledging my love life at all would look like. “You would have to determine how much of this work feels worth it to you,” Marquez adds.

"They put me back in the closet. And to avoid the potential fallout, I stayed there."

It’s also important to remember that directness can come in the form of baby steps. Re-coming out to my parents feels like too much at this point, but I also don’t want to maintain the status quo. So Marquez offers an example of how to take it step by step: If, say, a loved one winces at a queer on-screen kiss, try being direct — point out how the microaggression makes you feel and why it was hurtful. While this is totally my jam, it does require a lot of self-advocating. Not everyone will have the tools or the capacity to engage in this kind of work. “It’s okay to let things slide and receive support elsewhere in those moments when you just don’t have the emotional bandwidth to cope with microaggressions,” Marquez says.

If you realize that no amount of rainbow flag-waving is going to get through to the person or people that you want to, it might be time to consider a clean break. Or at least, stop talking to them in general, so they get the message. You are allowed to honor your own boundaries about the love and respect that you deserve from others in your life.

I don’t know exactly when I’ll have The Conversation with my parents, and I can’t predict how they’ll react. But ultimately, I know I’ll need to set boundaries with the people in my life who deny my sexuality. If I marry a man and they don’t want to come to my wedding, I’ll first roll my eyes at them and then probably take it as a hard goodbye. In other words, I’m hoping for the best but preparing for rejection.

One thing’s for sure: Before I walk down that aisle, I’ll need to shed the weight of disapproval because I’ve outgrown it. I don’t need the shame, so I’ll find another “something old.”

More like this
How did soy milk get so queer?
By Ian Kumamoto
How tattoos became powerful expressions of political resistance
By Allison Hawn
California could ban nonconsensual condom removal. Why isn't this already illegal?
By Melissa Pandika
Stay up to date