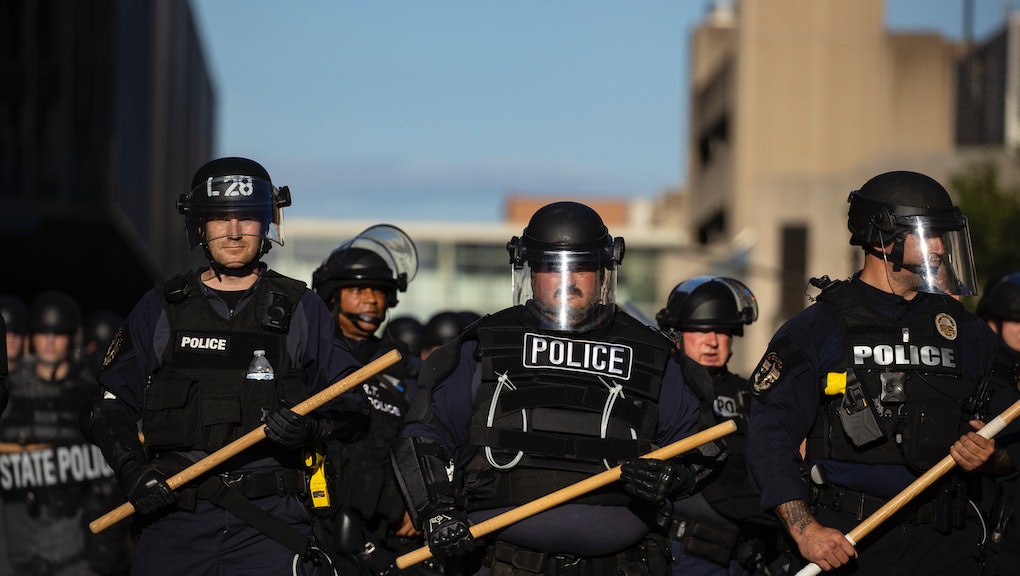 Nearly 150 years ago, Congress passed the Civil Rights Act of 1871, which granted citizens the right to sue elected officials and police officers for civil rights violations. Despite this, a legal doctrine known as "qualified immunity" actually makes it very difficult to sue police officers. In the wake of the police killing of George Floyd — following the deaths of Breonna Taylor, Philando Castile, Atatiana Jefferson, Michael Brown, and so many others — legislators are revisiting qualified immunity, and many are advocating for overturning it altogether.

What is qualified immunity?

Qualified immunity is a legal doctrine that prevents a public official — in the current national context, a police officer — from being sued for a civil rights violation unless there was a previous successful suit for the exact same issue. If it sounds confusing, that's because it is: In order to file a civil rights suit, an identical civil rights suit has to have already been filed. This makes it really difficult to establish precedent (a prior ruling that guides future judicial rulings) and to bring a case to court.

Per the Lawfare blog, qualified immunity is this: "a judicially created doctrine that shields government officials from being held personally liable for constitutional violations ... for money damages under federal law so long as the officials did not violate 'clearly established' law. It's the "clearly established" part that requires a "previously decided case that involves the same 'specific context' and 'particular conduct,'" The Appeal explained.

How does qualified immunity work in the court system?

A series of Supreme Court of the United States rulings established a two-part test for lower court judges to evaluate before bringing a case to trial. In the case of police brutality, the first part requires a judge to decide whether the police officer violated the Fourth Amendment of the Constitution by using excessive force, and if so whether a jury would come to the same conclusion — basically, if it's even worth it to go to court at all. The second part of the test requires a judge to determine if an officer had reason to believe that their actions were unlawful based on previous cases, i.e. whether any excessive force cases exist for virtually identical circumstances that established a precedent. If the case passes both parts of the test, it goes to trial, but if it doesn't, a judge is allowed to throw the case out.

What's the problem with qualified immunity?

Since 2009, more and more officers have been granted qualified immunity in cases where citizens were seriously injured or killed as a result of police force. Advocates say qualified immunity allows police to kill without any recourse for their actions, and additionally makes it extremely difficult for the families of victims of police brutality to bring their cases to court.

In a 2018 dissenting opinion in a case evaluating the use of qualified immunity, Supreme Court Justice Sonia Sotomayor wrote that the doctrine "tells officers that they can shoot first and think later, and it tells the public that palpably unreasonable conduct will go unpunished."

By and large, excessive force cases do go "unpunished." In one case, an arresting officer slammed a woman to the ground, which knocked her unconscious. Because of qualified immunity, the officer didn't face legal repercussions. In another, Houston police paralyzed an unarmed man by shooting him in the back. Because of qualified immunity, the Supreme Court decided not to hear the case.

Heading into the third week of protests against police brutality and the police killing of Black people, some Supreme Court justices have called for reviewing qualified immunity and how the doctrine is applied in cases of police force. New Jersey Sen. Cory Booker (D) introduced a bill in the Senate, the Justice in Policing Act of 2020, that addresses a number of ways police misuse their power; included in the legislation is a provision that would eliminate qualified immunity. "When it's so clear that an officer has violated community standards, department standards, and the civil rights of Americans ... they should be open to civil action," the senator said.

In the House of Representatives, Reps. Ayanna Pressley (D-Mass.) and Justin Amash (I-Mich.) introduced the Ending Qualified Immunity Act, writing that "the [Supreme Court]’s broad interpretation of this doctrine allows police to violate constitutional rights with impunity, immunizing them for everything from unlawful traffic stops to brutality and murder."

In addition, House Democrats this week introduced broad legislation aimed at reducing police violence. Much of the legislation is in response to the uses of force caught on camera in recent years that have killed Black Americans. For instance, the bill bans chokeholds and calls for independent investigations into police misconduct.

Will the legislation pass?

While it's likely that the legislation will pass through the Democratic-controlled House easily, whether or not the Republican majority in the Senate moves similar legislation along remains to be seen. There's large support for protests currently, and most Americans believe that police officers treat Black people more harshly than they treat white people.

But some lawmakers could believe that signing onto this legislation would appear anti-police, which could be a risky move heading into elections. Other conservative leaders say that qualified immunity hurts anyone who wants to make a civil rights claim against a public official.

More like this
After 9/11, the U.S. leaned into security theater. Here's how that's playing out 20 years later
By Vanessa Taylor
Of course Amy Coney Barrett claimed SCOTUS isn't partisan
By Rafi Schwartz
Live from New York: Revisiting the totally bonkers era of post-9/11 'SNL'
By Rafi Schwartz
Stay up to date