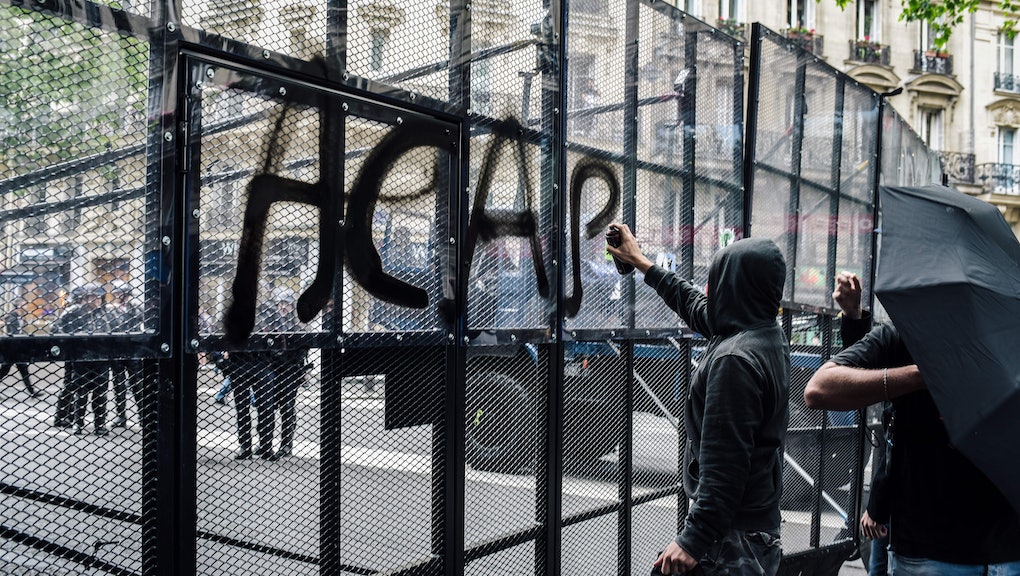 On May 30, days after the killing of George Floyd by a police officer in Minneapolis, protests broke out across the country, occasionally turning violent. In Philadelphia, a masked woman allegedly set two police cars on fire. Unable to identify her face, the FBI turned to social media to track her down. According to the Philadelphia Inquirer, some Google searches, a few Instagram videos, a LinkedIn profile, and an Etsy review eventually led law enforcement to Lore Elisabeth Blumenthal, a 33-year-old woman, who now faces up to 80 years in prison and a fine of up to $500,000 if convicted.

The FBI investigation started with just helicopter footage of the incident captured by a local news station, the Inquirer reported. In the footage, the woman could be seen throwing flaming wood into a cop car. The agents investigating the case turned to Instagram and Vimeo to find other footage of the incident and spotted the woman they believe was responsible for destroying the vehicles. They were able to identify a peace sign tattoo on the woman's right forearm. The FBI then started scanning through photos of the protests, searching more than 500 images of the scene taken by an amateur photographer to try to spot the woman. They eventually found her, and got a clearer image of what she was wearing: goggles, gloves, and a t-shirt with the phrase "Keep the Immigrants. Deport the Racists."

The shirt was not mass produced, and the FBI found an Etsy store that was apparently the only place to buy it. Agents looked at the reviews for the shirt and found a five-star rating left by a user named alleycatlore. The user was based in Philadelphia and the review was left just a few days before the May 30 protest. Agents took that username and dropped it into Google, where they found other profiles baring the same name, including one on fashion marketplace Poshmark. The Poshmark account included a name: “Lore-elisabeth.” Searching that on LinkedIn produced the result Lore Elisabeth Blumenthal. With a full name to work with, FBI agents started looking into her social media presence and found videos that showed her recognizable peace tattoo.

With a clear suspect in mind, the FBI found a phone number listed for Blumenthal. That number also had an address associated with it. The FBI then served a subpoena to the Etsy seller who sold the "Keep the Immigrants. Deport the Racists" t-shirt to find out the addresses of people who purchased the product. The address for alleycatlore matched with the address for Blumenthal's phone number. That was enough to lead to an arrest. Blumenthal is in custody and charged in federal court for arson.

In the wake of George Floyd's death, much of the public has started to call for police reform and some of the tools that law enforcement have access to, including technology like facial recognition, have come under fire. But this case serves as a reminder of the reach of police surveillance, and how complicit social media is in these investigations.

Following the events of September 11, police surveillance has been on the rise as prior privacy protections are thrown by the wayside in the name of safety. Social media in particular has become a powerful tool for police. According to the Brennan Center, dozens of major cities across the US have spent tens or even hundreds of thousands of dollars on tools designed specifically to monitor and scrape social media platforms for information. A recent report, signed by more than 50 civil society groups, condemned police abuse of social media surveillance, highlighting how there is little oversight as to how law enforcement monitors these platforms and warning that the behavior runs the risk of stifling First Amendment-protected activities. The report pointed out that surveillance particularly hurts marginalized communities, who are often unfairly targeted. Take, for instance, the NYPD's surveillance program that tracked and monitored activity of the city's Muslim community after 9/11, or its surveillance of Black Lives Matter protesters following demonstrations after the death of Eric Garner.

Given the ever-watching eye of law enforcement on social media, it's increasingly important to protect the identities of people at protests — particularly undocumented people who may be targeted by ICE if they show up to these demonstrations. Getting permission to post anyone's likeness on social media and blurring faces whenever possible before posting is the best way to ethically document these events. Police don't always need high-tech tools to track down targets. Sometimes the things that we willingly share on social media is more than enough.