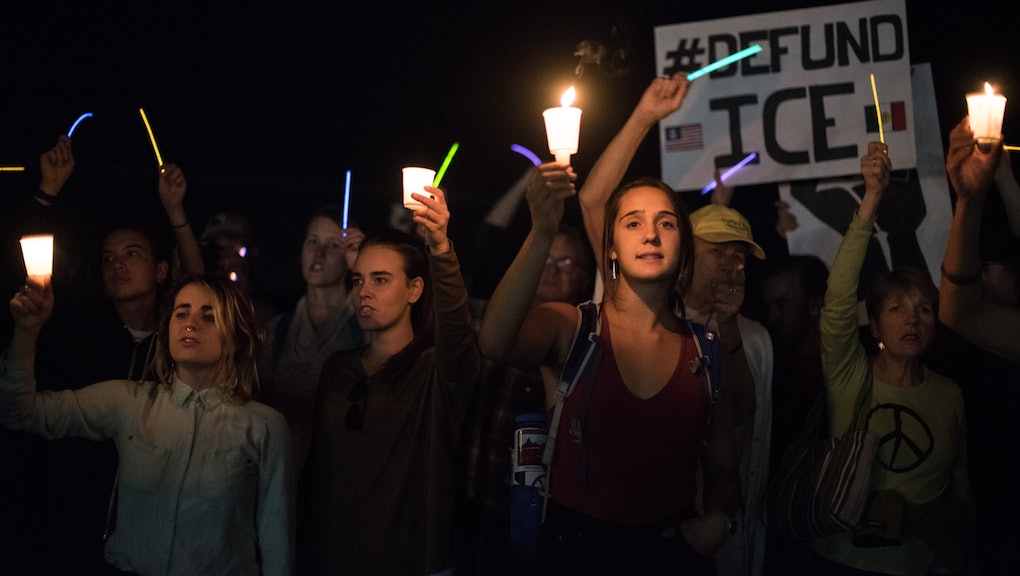 ICE agents are lurking at protests and making arrests

Across the country protesters hitting the streets in the wake of George Floyd's killing have encountered heavily armed police, often dressed in riot gear. For protesters shielded by nothing more than a mask to protect against coronavirus, the police use of batons, tear gas, and legal protections that guard against use of force complaints is a major threat to their safety. But for undocumented immigrants living in the United States, just stepping outside one's front door is already a risk.

Immigrant rights organizations, like the Immigrant Defense Project have warned against the presence of Immigrations and Customs Enforcement (ICE) at these protests, especially in regions where police departments have a history of cooperating with ICE agents to identify, arrest, and detain those without documentation.

Mizue Aizeki, the deputy director at the Immigrant Defense Project, told Democracy Now! about an instance at a protest in Floyd's honor in New York last week, when a Puerto Rican man was handcuffed and forced to the ground while agents drew their weapons on him. Aizeki said that the man, a U.S. citizen (as all who are born in Puerto Rico are), was a veteran. After ICE agents found his wallet they released him, as they had no legal grounds to detain him.

The increased presence of ICE agents at protests is part of the agency's plan to increase surveillance. An ICE spokesperson told CNN that "in light of civil unrest taking place across the country, ICE personnel and Special Response Teams have been deployed to protect agency facilities and assets in support of the Federal Protective Service and assist local, state, and federal law enforcement partners, as needed."

The spokesperson also said that protests are considered "sensitive locations," and internal policy states that "enforcement actions" should "generally be avoided." It's unclear, then, what their role should be, given that federal agents don't typically have jurisdiction in local municipalities, and ICE's main objective is to arrest, detain, and deport undocumented immigrants.

Despite New York police assisting in ICE's arrest of the U.S. citizen at a protest last week, the spokesperson told CNN that the goal of ICE is to "generally keep the peace, protect citizens, [and] protect property," and that there will not "be any immigration enforcement element whatsoever." The actions of ICE agents appear to contradict the formal statement, though, and immigrant rights advocates like Aizeki worry that ICE's presence at protests is just the latest instance of cooperation between police and immigration enforcement.

"One of the big concerns we have with ICE partnering with the [New York Police Department] right now is, you know, they’ve been very opportunistic in terms of policing," Aizeki said. "Over the past 10 years, we’ve seen ICE basically attach themselves or embed themselves to local policing forces all over the country."

In Phoenix, Arizona, ICE agents arrested a woman, Máxima Guerrero, who attended a protest in the capacity of a legal observer, someone who can help document potential civil rights violations by police. On her way back to her car she was arrested and detained. As a recipient of the Deferred Action for Childhood Arrivals (DACA) program, lawyers fought for Guerrero's release given the legal protections provided by DACA.

But far too often, those arrested and detained by local police are sent to jail, where they're fingerprinted and their personal information is collected. If they don't live in a "sanctuary city," local police are free to hand over that information to ICE agents, who then use that data to build a case for deportation proceedings.

Another undocumented man who was arrested in Phoenix, Orona Prieto, is not protected by DACA. He now has to appear before a judge in immigration court. According to his attorney, Prieto wasn't even at the protest when he was arrested. "His skin was brown, and because his skin was brown and he was in the area where a protest was happening, he was pulled over, pulled out of his car, and given felony charges," his lawyer said.