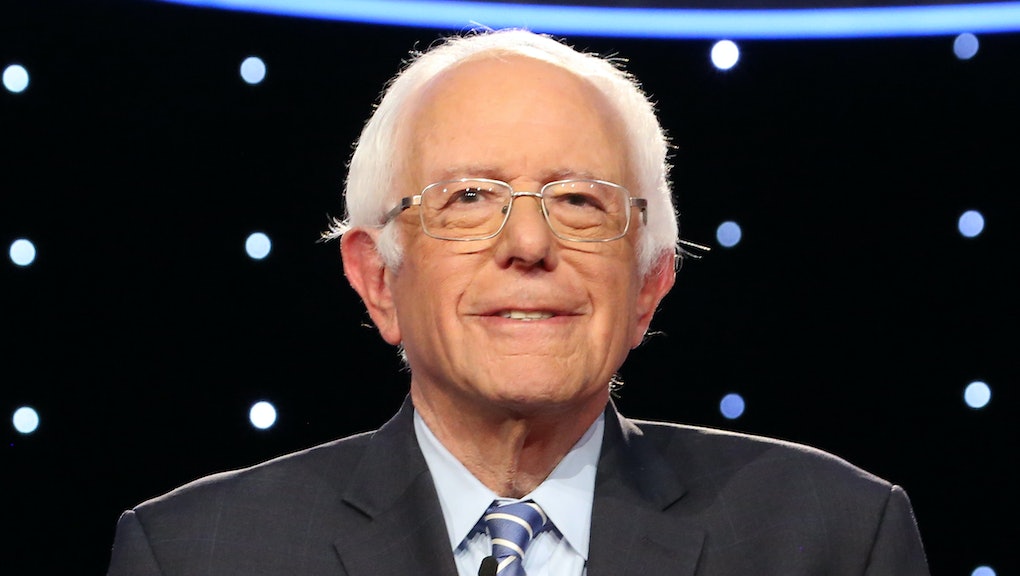 Bernie Sanders wants you to know he's not going anywhere, thank you very much. The Vermont senator has bounced back from a grim few weeks of sliding polls and a serious health scare, thanks to a solid appearance at Tuesday's Democratic debate and some major endorsements. Shortly after Tuesday's event, reports emerged that New York Rep. Alexandria Ocasio-Cortez would endorse the senator at a weekend rally in Queens, New York. On Wednesday, it was revealed that Ocasio-Cortez would be joined by Michigan Rep. Rashida Tlaib and Minnesota Rep. Ilhan Omar in endorsing Sanders, affirming his position as the leader of the Democratic primary’s left flank.

“Bernie is leading a working class movement to defeat Donald Trump that transcends generation, ethnicity, and geography,” said Omar in a statement to The Washington Post. Sanders responded in kind, saying that Omar "will not back down from a fight with billionaires and the world's most powerful corporations to transform our country so it works for all of us," adding, "I'm proud of what we've done in Congress, and together we will build a multiracial working-class coalition to win the White House."

Omar is the only one of the three popular, young progressive representatives (who make up the group known as “The Squad,” along with Massachusetts Rep. Ayanna Pressley) to have officially made her endorsement. A spokesperson for Ocasio-Cortez told the Post, “We’re looking forward to Saturday,” referring to the Sanders rally in New York City this weekend, titled "Bernie's Back." At the debate, the senator promised an appearance from a “special guest.”

These endorsements are not particularly surprising — Ocasio-Cortez was recruited by the Justice Democrats, a group founded in 2017 by former leaders from Sanders’s 2016 campaign. Like Sanders himself, Ocasio-Cortez, Omar, and Tlaib have staked out a position far to the left of the median Democrat, arguing that the party needs voices in safe blue seats pushing the party towards ambitious progressive goals. But as time went on and their endorsements never appeared, some wondered if the Squad members might be planning to instead endorse Warren, Sanders's closest ideological counterpart who has been steadily rising in the polls.

Such a blow could have proved devastating for Sanders. Instead, the women came through for him at a crucial moment.

As Warren has surged over the past month, emerging as the one candidate who seemed capable of uniting the party’s left and center flanks, Sanders ran the risk of becoming an afterthought. And when he suffered a heart attack earlier this month and had to leave the campaign trail for a few days, some thought he might never be able to regain his position. Even though he appeared Tuesday to be back in good health, it’s understandable that some voters might have some concerns, given that he’s 78 years old. Considering that Warren also supports Medicare-for-All, his key policy plank, the health scare seemed as if it might potentially take Sanders out of the race.

But that narrative has now been squashed. The message his campaign is sending by revealing these endorsements now is clear: If some of the most influential Democrats in the House don’t see Sanders’s campaign as an afterthought, neither should voters. Revealing these endorsements when there are still so many candidates left in the race might seem like a case of bringing out the big guns too early, but it's actually a sharp strategy, even if the Iowa caucuses are still nearly four months away. The field is about to start winnowing swiftly, and Sanders needed a win like this to solidify his top-three status as that process begins.

Furthermore, their support helps him draw a clear distinction from Warren, which at this point should be his most pressing goal. Primaries are all about herd mentality: If a critical mass of progressive voters come to believe that Warren offers an acceptable alternative to Sanders, and she can win, they will coalesce around her even if she was their second choice. At the end of the day, the left wing coming together offers the best chance to beat Biden, whose policies are decidedly more moderate than Sanders's or Warren's. Their supporters might rather one than none, even if the one isn't their ultimate favorite.

But Sanders and Warren have some distinct differences, even though they share much in common. Sanders has proposed a far more aggressive tax on the rich, for example, and has generally endorsed a more dovish set of foreign policy preferences. Rolling out the endorsements of progressive flag-bearers like Tlaib, Ocasio-Cortez, and Omar is a loud signal that Warren shouldn’t be seen as a consensus choice for progressives. It also sends a clever warning shot across Warren’s bow, making clear that if she tacks to the center to try and scoop up more Biden voters, she’ll face stiff headwinds from her left. In short, Sanders is forcing her to compete with him on his home turf, and making it harder for her to run as a unity center-left consensus choice. And he’s been able to do all of this without going negative against Warren, which the two candidates have avoided so far.

Warren understands the value of their endorsement; according to the Post, both she and Bernie had been courting the representatives over the past few months, whether through co-sponsoring their bills or engaging with them on Twitter. On Tuesday, Sanders and Omar revealed a new joint piece of legislation to create universal school meals.

Tuesday’s debate was key for getting Sanders back on track. He appeared sharp and assertive, which is what he needed to do to assuage those concerned over his health. “I’m healthy, I’m feeling great,” he said. His appearance, along with his shiny new endorsements, should do a lot to win over any of his supporters who were wavering toward Warren. So far, the campaign has pitted the moderate candidates against the progressive group, but at some point, either Warren or Sanders will emerge as the consensus left-wing choice. Warren may have the upper hand in polls at the moment — but as his debate performance and endorsement slate illustrates, Sanders isn’t going down without a fight.