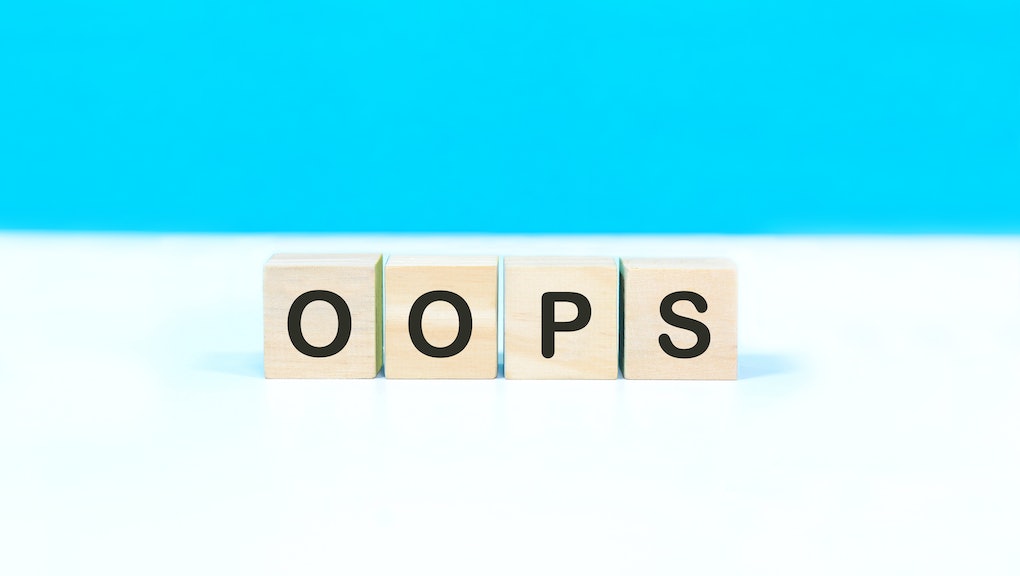 How to apologize for something you did a long time ago

Although this year has been a dumpster fire floating on a lazy river of doom and despair, we live in a mostly modern and enlightened era. People from all walks of life are being much more honest about how certain actions make them feel. However, as we learn from people in marginalized communities what not to do, past bad behavior of all sorts continues to come to light. Some of us who are realizing our prior faults might want to apologize to an old friend or family member for something they did months, years, or even decades ago. When it’s a past offense that you want to take responsibility for, how do you effectively and sincerely apologize?

Most of us are taught the “proper” way to apologize as kids in elementary school: Suck it up, verbally apologize for doing what you did, and move on. For adults, it’s a little more complex (just like the things we need to apologize for).

There are actually multiple parts to crafting a proper apology for something you did long in the past. For the sake of this article, I’m using the time I punched my bully in the face in grade school for an example of something I did a long time ago that I’d want to apologize for. While this isn’t the same as saying something racist or homophobic — which what the majority of brands and celebrities tend to need to apologize for — it is an immature, ignorant form of problem-solving.

To convey a respectful apology, first, you need to acknowledge what you did and how it hurt the other person. If not just me saying, “sorry I punched you,” it’s first realizing I physically hurt this person, regardless of my reasons. “People need to know you truly understand how your actions were hurtful to feel your sincerity,” says Brian Wind, a Tennessee-based psychologist and chief clinical officer at alcohol and drug treatment centre, JourneyPure (where atoning for past wrongs are a part of self-healing). “If you're apologizing after a long time, acknowledge it. Explain why it took you that amount of time to apologize, as sometimes a person may be more upset with the fact that you didn't see a need to apologize rather than the action that hurt them.”

Second is the actual apology. Before you blurt out your sorries, think about whether the apology will make the person feel better or not. One just needs to take a look at the Popular Brands Sorry For Racism Tour of 2020 for examples of apologies that only help the parties who are “sorry” but not the folks affected. A true apology takes the feelings of the person you’re saying sorry to you higher than your own. So, truly: Consider whether this person even wants to hear from you or if a text or DM might upset them further.

“Tell them you'd like to make a sincere apology and ask them when they would be able to listen to one,” says Wyatt Fisher, a Colorado-based psychologist. “If they agree, it's highly unlikely making a sincere apology in the way outlined above would re-offend them. Saying sorry is a step in the direction towards healing any lingering resentment the other person may have towards you.”

In my situation, I don’t think my former classmate would even remember the event, so hopefully approaching him with a sincere sorry wouldn’t be painful for him. However, apologies come in all forms for many actions, so the action you want to apologize for might be truly painful to rehash. If it is, but you still feel you need to say sorry, think about how you can talk about the subject in a way that doesn't inflict more emotional pain. “And accept the other person's response, whether it is hurtful or gracious,” Wind adds. Anyone in a bad relationship has known both sides of that coin, that’s for sure.

For celebrities, Instagram in concert with the Notes app have become vehicles for saying sorry in the most impersonal of ways, but for us everyday folk, sincerity is key to a best apology. You’re doing this for emotional growth, and to try and do right by someone you wronged, so accept the possibility that whoever you’re apologizing to won’t forgive you. “Don't expect forgiveness and accept their reaction,” Wind says. “While there's a chance the person will refuse to forgive you, there's also a chance that they will and be willing to rebuild their relationship with you.”

The last part of a good apology is, making amends. “By offering to do something to make things right with them, [it shows that you may] want to restore the relationship,” Fisher adds. Offering something could mean a promise to not behave similarly again, and to be more cognizant of your actions — which is about community more than anything else. When it comes to something you're apologizing for in the past, whether it’s a grade school scuffle or a decades-long disagreement, think about whether saying sorry is for both of you, or just yourself. And act accordingly. That’s the difference between a “sorry” and actual change.

More like this
Empty middle seats cut coronavirus risk drastically, according to new study
By Tracey Anne Duncan
We don't trust our tap water — and it's a big problem
By Asher Rosinger
Having a bad trip? This hotline can help you find your chill
By Melissa Pandika
Stay up to date