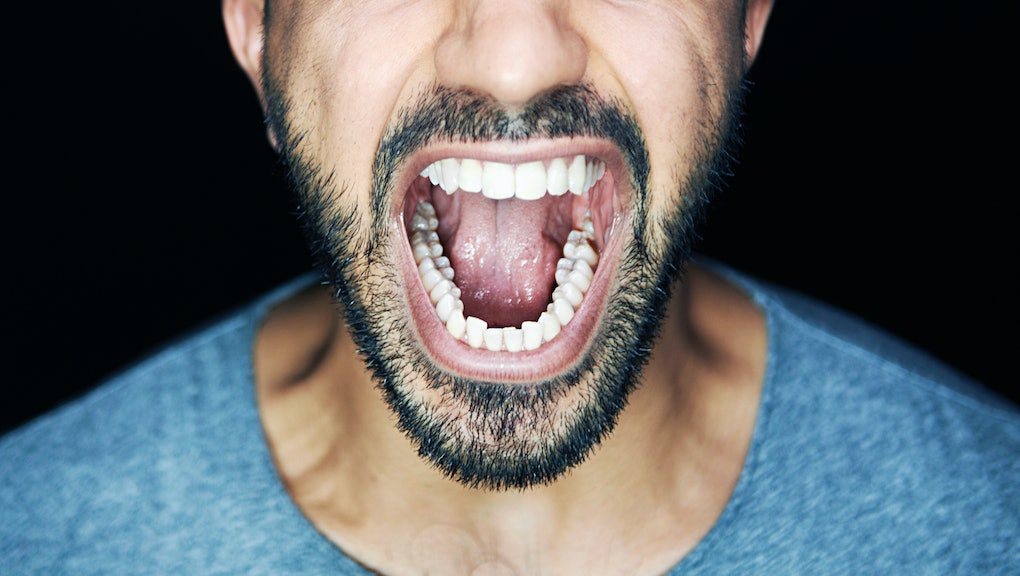 Unfortunately, anger is still the default emotion for men

The one time in school that I acted in so “manly” a way that it shocked my classmates, I got suspended. In junior high, I bore a striking resemblance to Steve Urkel, and wouldn’t you know it, I got bullied. Being a smart kid while also being Black, whisper thin, and femme-adjacent led to a lot of offensive comments from the other boys in class. One afternoon, after almost a full year of snide comments about my femininity (and therefore my perceived gayness), I had just about enough, and as one boy began to say the phrase, “Joe is such a faggo—” I instinctively punched him right in the face. As I pulled back my fist amongst a flurry of gasps, I thought to myself, “Why do I feel so angry?”

First, let’s identify the obvious: We live in a society that has always valued masculinity above all else. Because of this, toxic masculinity — oppressive and harmful notions linked to male gender — reigns, still. One of its main tenets: the idea that showing vulnerability is feminine and therefore weak (which is a problem in itself to unpack).

Most men (including gay Black men like me) at one time or another use the most stereotypically masculine way of conflict resolution: anger. Discussing emotional expectations from Black men is a whole other conversation, by the way — one that layers masculinity and race, but for now, let’s focus on the broad strokes.

To those that are already thinking #notallmen, there is, of course, the nature versus nurture debate behind whether anger really is the default emotion for cisgender men. On the biological side of things, men naturally harbor higher levels of testosterone, the hormone which regulates sex drive, bone mass, fat distribution, muscle mass, and strength. The prevalence of this sex hormone is widely believed to provoke aggressive responses in men.

In fact, a 2012 study by NIH found that testosterone levels are higher in individuals with aggressive behavior, such as incarcerated people who have committed violent crimes. The same study also notes that testosterone increases during the aggressive phases of sports play. Testosterone also occurs in women (technically speaking, people with vaginas), but those levels are much lower, giving way to higher levels of estrogen, the hormone responsible for feminine physical features and lower levels of aggression. This is not to say that women can’t be aggressive either.

This sliver of biology is one piece of a very large puzzle that theorizes the original of the relationship between men and anger, but it's worth taking into consideration. It's important to also note in which instances it's more socially acceptable to express anger.

This discussion about men and rage becomes especially fraught when you bring sexual orientation into account. For gay men like me and others that don’t fit the heteronormative idea of what a “man” is, there’s certainly a push-and-pull between our baser instincts and our learned ideas of how an evolved homosexual male should act.

I was chatting about this subject with one of my best friends, another gay man, and he told me he that "hardly ever" gets angry which is true; he’s very chill. But — I do recall a time years ago where he proudly told me he got in a fist fight that left him with a cracked rib. I also feel a certain sense of pride in the time I stood up to my bullies, even though I know that a bout of fisticuffs is not the healthiest way to express my emotions. It all goes to show that gay men (or, at least me and my buddy) are not totally immune to resorting to aggression or that stereotypical dominance dance.

Although we are evolved, humans are still animals, which means that testosterone is not the only biological component that drives us. “When challenged, animals rely on their pride — being bigger, stronger, faster, more aggressive, more impressive — in order to negotiate challenging situations where they feel threatened,” says Danny Greeves, a U.K.-based hypnotherapist and behavioral change coach specializing in resolving resentment. “Man has the capacity to use reason, logic, and objectivity, but in real life situations often this animalistic nature still runs a lot of the show.”

Men have come a long way from our prehistoric beginnings — most of us are no longer hunting and making fires for survival, for instance. Yet we haven't been able to escape the evolutionary notion that males are disproportionately responsible for strength and protection. This leads to a whole host of problems, like income inequality and domestic violence (to name two of a very exhaustive list). The patterns behind gender inequality are hardwired into our DNA and often override our more logical argument. “As a result, when men feel threatened and their values are challenged, the automatic response is often to resort to our animalistic nature to resolve the situation — leading to expressions of anger,” Greeves adds.

“Bad behavior is purely about the way we were raised in the way we create boxes for both men and women,” says Patrick Wanis, a Los Angeles-based psychologist and human behavioral expert, adding that we often use harmfully gendered criticisms to guide boys’ behavior. These phrases include, ”man up,” “don’t cry,” “don’t show weakness,” “why are you being so emotional,” and others, and direct boys to assume the role of aggressive adult male behavior.

Regardless of your gender, there’s a lot of contention around the act of crying. It’s quite unhealthy, considering how healing crying can be, both emotionally and physiologically. The contention cuts deeper for boys; if you’re a boy, it’s often hammered into your barely formed skull at a tender age that crying makes you weak. Or in words I've been called by fellow kids who didn't know better: “a little sissy bitch." And people wonder why anger might be a default emotion instead of sadness.

If you’re taught — by other kids, in your culture, or by TV — that crying is wrong, you’ll naturally rely on that deep-seated aggression to get through what you’re sad about. Aggression is often, after all, sometimes misconstrued as the most powerful and desirable trait: strength. “We’re automatically saying to boys this is what you’re supposed to be, this is your identity, this is how you’ll be defined, this is how your self-worth will be valued,” Wanis says.

To bring it back to my time in middle school, I threw my one and only punch at another person because I didn’t yet know how to deal with what I was feeling in a more constructive way. I was frustrated, annoyed, exhausted, saddened, and yes, enraged, all the same time. That’s a lot of feels, dude, even for an adult — let alone a preteen — to process constructively. I could’ve used my words to express the complex set of emotions I was experiencing, but I never was taught how to do so, by anyone. Some schools teach emotional intelligence to boys, but that is extremely rare, even now, and definitely not in the Catholic school I went to.

As we ponder the boundaries of gender that humans have adhered to for entirely too long, things are changing slowly. I have to believe that. But still, boys are too often not taught how to express what they’re feeling at home either, which leads to adult men — even ones who are at the upper echelons of society — resorting to anger when frustrated. Just a couple of weeks ago, Republican Rep. Ted Yoho allegedly called New York Rep. Alexandria Ocasio-Cortez a "fucking bitch" (funny how versatile the word "bitch" is, isn't it?) during an argument outside the Capitol Building. This is a grown-ass man who needs a lesson in emotional intelligence, and shows just how prevalent male anger is in American society and beyond.

It has been proven that toxic masculinity and how we raise boys to be aggressive men leads to both societal problems and as the American Psychological Association notes, psychological and physical damage to men. So, how can we change the way we condition and raise boys so they grow up to be more emotionally balanced men? And can adult men unlearn relying on anger?

“I teach my patients that vulnerability is strength. If you’re able to reveal all of yourself, that means you have no fear,” Wanis says. Admitting that you need help or support — or in Yoho’s case, that you’re frustrated — can lead to empathy which is arguably one of the most desired qualities in being an effective leader. “The solution is to guide boys into recognizing that the human experience is full of a wide spectrum of emotion — including rage — but also empathy, compassion, sadness and grief. Helping boys to understand that if you withhold all those other emotions in lieu of anger you’re harming yourself.”

Wanis is not exaggerating this warning: A 2014 study found that bottling up your emotions has probable correlation with premature death. In human language: Being emotionally constipated can shave years off of your life.

Anger is indeed an emotion men rely on, often justifiably so — shoutout to the late John Lewis and his lifelong use of righteous anger as a tool for necessary systematic change. But sometimes, we men are angry in lieu of allowing themselves to feel other, more uncomfortable feelings.

True story: A few years ago one of my grade school bullies (not the one I punched) added me on Facebook. Once I accepted his friend request, he sent me a message apologizing for being so mean to me in middle school. Now in his 30s, this man explained that he was also closeted at the time, and was expressing his rage and frustration at a more obviously feminine boy, which was me. This is, I'd later learn, something psychologists sometimes classify as transference.

I was shocked, to be honest, I had no idea he was going through the same issues I was. I’m glad this man proves that emotional evolution is possible for men. But, I’m also thinking about — and urging us all to consider — how much better our boyhoods would have been if we had the freedom to express our thoughts and feelings to each other through our words, instead of through our aggression and our fists.