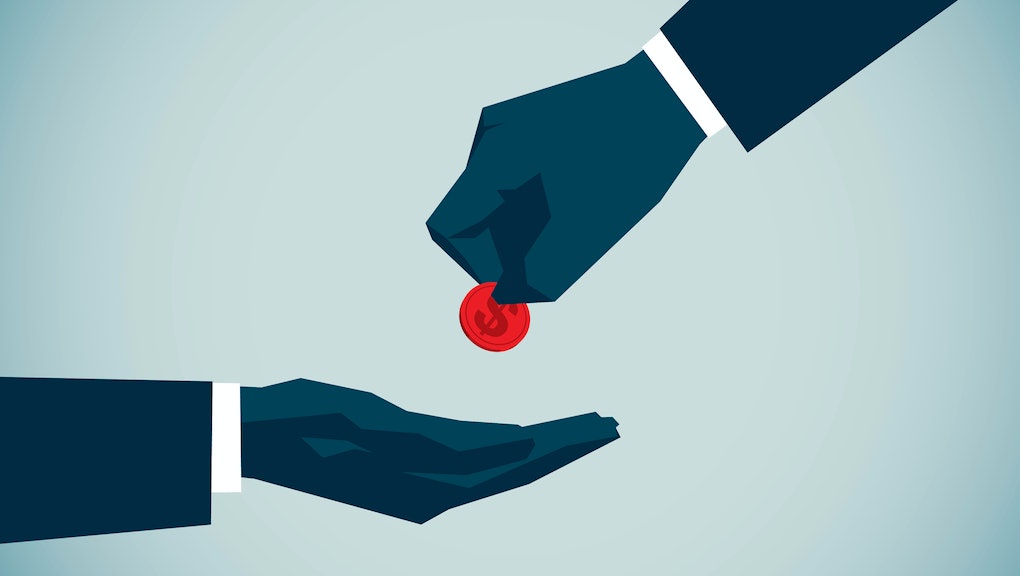 How to negotiate salary like your more privileged peers

Always be closing. Greed is good. Get rich or die trying. These are the takeaways from every movie about how to be a powerful and effective businessperson. But these cutthroat, cliched aphorisms don’t tell us anything about how to negotiate in the real world if you aren’t already in a position of power. Many of us — women, POC, and queers — didn’t grow up with the most obvious type of privilege: wealthy, straight, white maleness.

If you don't have that privilege, there's endless data that shows you have to fight harder to stay employed and climb the ladder. There are jarring racial and gender wage gaps, LGBTQ people's continuing struggles against discrimination at work, and the reality that — for people of color especially — work ethic and performance can be blurred by bias. A 2015 study reported on by the Atlantic showed that "Black workers receive extra scrutiny from bosses, which can lead to worse performance reviews, lower wages, and even job loss."

I could continue to spit stats about the many barriers marginalized people face when it comes to pursuing success in their careers but you get it: The odds are often stacked against us, so we have to foster an informed, empowered mindset — and one crucial aspect of that empowerment is making sure we're compensated fairly.

Most of us didn’t come into the workforce with our rich, established, boardroom-savvy fathers whispering secrets of success into our ears. In order to get some financial security, own homes, and just get our piece of the pie, we often have to negotiate salaries and benefits and contracts like those who did. Here’s how to do it, and do it well.

“Go in armed with the information,” says Kristy Wallace, CEO of Ellevate, a global community of women aiming to help each other succeed in business. “Ask others what they make. You can ask the people in your network. Find out what the straight white men are making so you can go into a negotiation understanding the market.”

Yes, she said it. Find a white guy in your field and ask him what he makes. You deserve to know (even if you’re a white guy too). Why does his salary matter? White men are generally the highest paid demographic and it'll help to have an idea of what's available to you — someone who (back to that wage gap again) might now be making as much.

Transparency is a powerful tool in this situation. If you aren’t close with anyone in your field that fits the bill, Wallace suggests searching at the edges of your network — friends of friends and such.

Folks in your field will often be happy to talk to you if you have some social overlap and you show interest in their career path. Be honest with them about your intentions. Tell them you are gathering information to prepare for a potential salary negotiation. You may end up finding what might seem an unlikely ally or connection. If you can’t get an individual to talk to you, sites like Indeed and Glassdoor post average salaries for thousands of positions.

Also, don’t forget about unions; they aren’t just for socialists and coal miners. There are unions for thousands of different trades. They charge membership dues and usually require some level of participation (attending meetings and the like), but they can make a big difference in equalizing the playing field for professionals. Union reps can also help you gather salary information and if a company you work with hires unionized workers, there are usually set salary minimums and well-defined benefits.

Last, but not least: Find out where your salary is coming from, says Wallace. Practically speaking, this means that you have to know how the business makes money and how you contribute to that. Walk in the door with numbers that connect your work to the bottom line.

Know what you bring to the table

In the past, I have had a tendency to give out a lot of personal information in negotiation situations in order to make my case for a raise, but the truth is — as cold as this sounds — your life circumstances will not sway most companies. “Businesses are not thinking, ‘she has two kids to raise and she’s nice so let’s hire her,’’ Wallace says. “You need to be able to say what contribution you have to make to the company.” Businesses and brands pay for value, and you have to know yours.

What are you willing to contribute? Why are you worth this amount (versus, why do you need this amount)? Connect your value to the profit of the business. How does what you offer help the business make money?

Keep track of your work at every level, micro to macro.

Looping back to my point about people of color being discriminated against in the workplace, it can be particularly important for them to document evidence of their proficiency and talent in case they feel they're being undervalued.

As Alan Henry — a Black journalist who has written widely about how to be successful, productive, and get the most out of your career — recently pointed out in a New York Times article, "the real factor determining whether you can take productivity advice at face value" is privilege. "Some of the best methods to manage our workloads and our careers can be locked off to marginalized people, mostly because of the way we’re perceived by other people," Henry said.

And so, until that changes (don't hold your breath), we have to keep track of our work at every level, micro to macro. Minorities would benefit greatly from keeping track of the work they put in and summoning the swagger to match. The entitlement that white men seem to have an unlimited supply of might not come as naturally for Black Americans, gay and trans people, and women. But entitlement is no match for confidence, capability, and receipts.

For me, this means knowing how many articles I write per week and how much time it takes me to write each of them. It also means knowing how many people read or shared my work and being able to say that my work is in tune with current trends and conversations. That way, I can confidently state my value — in dollars — to a potential employer.

Make a script and practice it

“I get nervous because I’m passionate about expressing my value, so I go in with a script,” Wallace says. Being prepared in this way ensures that you have the facts down and will be less likely to get spooked by the stress of negotiating. Simply practicing your major talking points with a friend or colleague means that you have an opportunity to hear how you sound and get feedback in a no stakes situation.

When you’re making a script and practicing it, you have to take into consideration the possibility of getting rejected for your request for a raise or your bid on a contract. “When the answer is no, you feel like you’re lacking in control. You’re stuck,” says Wallace. But ‘no’ is not the end of the conversation, she points out.

A business may be saying no to a certain dollar amount or time frame, so use that as an opportunity to get clarification “The follow-up to ‘no’ is asking questions. Ask why. What are the business reasons behind how this decision was made?” If the people you want to work with can’t offer you what you want now, find out if there’s a possibility for future opportunities.

Once you understand the business’s perspective, you might opt to negotiate in other ways. “There are other things that you can negotiate for,” says Wallace. “If it’s not money, it could be leadership development, titles, equity. What are the ways that you can get increased value that isn’t a dollar amount?”

If you’re anxious about talking about money, you’ll be inclined to beat around the bush or hint around about what you want. Don’t.

Express that you want to negotiate your raise or contract before the main conversation about it starts. Instead of saying, “I’d like to have a conversation with you,” or vaguely suggesting a lunch date, try, “I would like to talk to you about my compensation. Is Tuesday at noon a good time?” Make sure that you and everyone involved knows that they are entering into a negotiation. “When you blindside people, you’re not going to get a response,” Wallace says.

If you’re anxious about talking about money, you’ll be inclined to beat around the bush or hint around about what you want. Don’t.

Negotiating can be stressful for everyone — even those who are holding the purse strings — and it can take some the pressure off the conversation when you frame it as a task, just like any other. You also want to make sure that there is a clear timeline for decision making. Wallace says that asking for a timeline can be as easy as saying, “Will you be able to get me an answer by the end of the week?”

You don’t have to be a demanding dick about asking for what you want. Forget about all that “greed is good” white heterocapitalist bullshit. You don’t actually have to be cutthroat. Be specific, hold your integrity, and be kind.

I’m not trying to be all “look at Oprah,” but look at Oprah. She is known as a business genius and also appears to be a compassionate human being. Even if your first tries at negotiation don’t turn out exactly how you want them to, people will remember you as a savvy communicator and that’s a start. The money will likely follow.

More like this
An anti-vaxxer decided to come to work in blackface, comparing her "plight" to that of Rosa Parks
By Melissa Pandika
This anxiety study is a really passive-aggressive reminder that wealth equals happiness
By Ian Kumamoto
Brain scans revealed how racism weighs on Black women's health
By Sierra Carter
Stay up to date