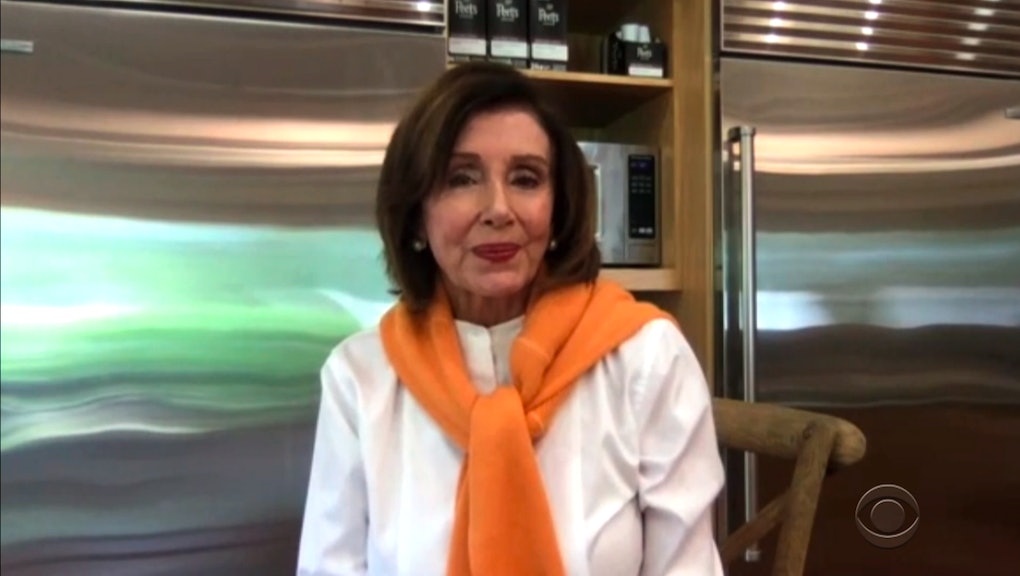 On Monday night’s at-home installment of The Late Late Show with James Corden, House Speaker Nancy Pelosi ripped into President Trump’s streak of coronavirus misinformation and inaction. From her kitchen studio, Pelosi condemned the administration’s efforts to downplay COVID-19 for the better part of February and March. “The delay and the denial caused deaths, and that’s just the way it is. Right now, we’d hope that they would’ve learned from their mistakes,” she said.

The president’s regular press briefings have oscillated between somber dulcet tones that centrist pundits tend to label as presidential and indignant rage. This peaked with a 2.5 hour marathon briefing on Monday, in which Trump yelled at numerous reporters and claimed total authority over states and governors. Pelosi took aim at the president’s well-established break from the scientific community during these briefings and Twitter missives touting unproven remedies like hydroxychloroquine. “The fact is, if you’re not evidence based, if you’re not science based, you have the luxury of just saying whatever you feel like. And that luxury is one our country can no longer afford,” she said.

Besides general appeals to facts and curbing misinformation, Pelosi is mostly hoping to expand our understanding of the virus. At this point, Pelosi’s primary focus is on vastly expanding Americans’ access to testing and data on which groups are being disproportionately affected by the virus. “If we’re going to defeat this, we have to define it,” she said. Pelosi advocates getting the necessary supplies to medical professionals and caregivers, so they don’t have to rely on secondhand Yankees ponchos while treating patients.

Pelosi also tackled the repeated notion of comparing the virus to wartime efforts, despite the supply chain lagging behind those needs. “The president says we’re at war — but our troops do not have force protection,” she said. “They don’t have the equipment to protect themselves, they don’t have the equipment to save others — that’s wrong. So if we’re going to call it a war, let’s protect our soldiers on the field.”

Later in the discussion, Pelosi took aim at the Supreme Court for the reckless decision to condone an in-person vote in Wisconsin last week. “It was the equivalent of the Supreme Court of the United States, saying to the people of Wisconsin, ‘why don’t we all just get together and go to Mardi Gras,’” she said. “They risked their lives to vote. It shouldn’t be that way — this is the United States of America. The court was accomplice to it, 5-4.” Days before the Wisconsin primaries, presumptive Democratic nominee Joe Biden also said in-person voting could be held safely, along with encouraging voting in three additional states on March 17.

Corden, the Murrow of our time, later asked Pelosi to share her robust collection of ice cream and candy during a Show and Tell segment. Everyone felt a little more in their element here, as my eyes began to glaze over.

More like this
“A.I. is actually the fastest path to communism,” and other thoughts from Grimes that make no sense
By Rafi Schwartz
TikTok's favorite beekeeper is getting dragged for "faking" it
By Kyle Turner
Jennifer Ngo's hilarious TikTok videos increase visibility for the disabled
By Kaila Yu
Stay up to date