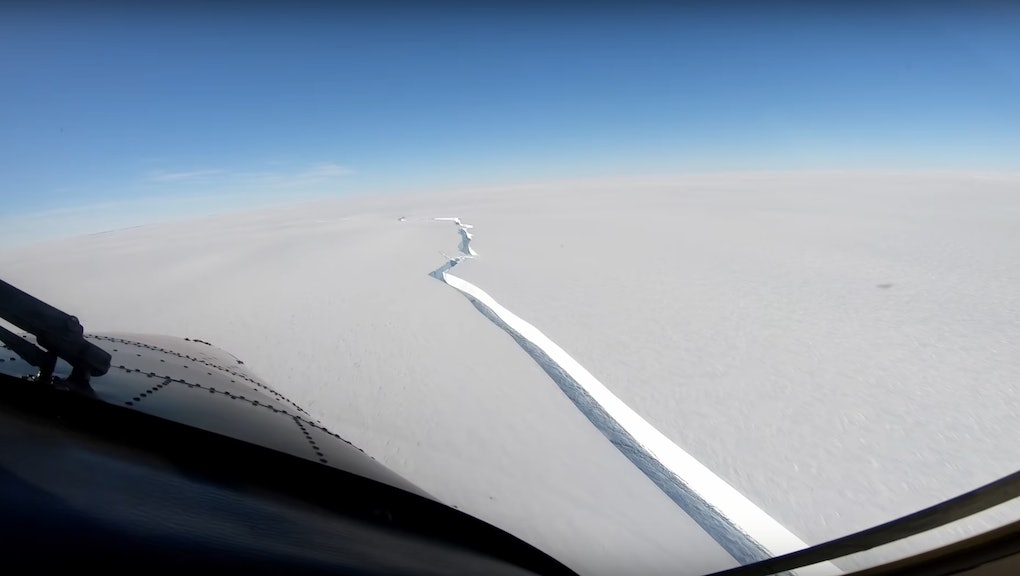 An iceberg the size of L.A. just broke off from Antarctica

Imagine the entire city of Los Angeles breaking off from the state of California and drifting off to sea. That is basically what happened last week in Antarctica when, according to the British Antarctic Survey (BAS), a massive iceberg measuring in at more than 490 square miles broke off from the Brunt Ice Shelf.

The split, which BAS confirmed on Friday, has been a long time coming. Three major cracks have developed in the giant floating sheet of ice over the course of the last decade. Scientists first noticed in 2011 that previously stable chasms, or cracks that go all the way through the 500-foot thick mass, were expanding, opening the door for complete breaks. In 2016, the "Halloween crack," named for the day it was first spotted, appeared on radar images. Earlier this year, NASA's Earth Observatory noted a third crack had occurred and appeared poised to result in calving, which is when ice chunks break off from a glacier. That crack tore through the Brunt Ice Shelf at a rate of half a mile per day until last week, when a chunk of ice larger than the entirety of New York City finally broke off, after widening by "several hundred meters" in a matter of hours.

Though this break, which NASA and other observers labeled as imminent earlier this year, was long considered an inevitability, the occurrence is worth noting — and not just because of the iceberg’s sheer size. The Brunt Ice Shelf hasn't experienced a major calving event since 1971, according to the European Space Agency, and there’s likely to be fallout.

It’s possible that the newly formed iceberg will drift, causing an interruption in commercial shipping lanes that run near the south pole, Earther reported. It also could simply hang out near the ice shelf it broke off from — but in either case, it is likely to continue splintering and creating more, smaller icebergs.

Four years ago, BAS moved the Halley Research Station, which operates on the ice shelf, inland in anticipation of calving — a decision that allows scientists to continue using GPS instruments and other technology on site to identify additional changes. “Our job now is to keep a close eye on the situation and assess any potential impact of the present calving on the remaining ice shelf,” Simon Garrod, Director of Operations at BAS, said in a statement, noting that the situation is “dynamic.” He continued, “We continuously review our contingency plans to ensure the safety of our staff, protect our research station, and maintain the delivery of the science we undertake at Halley.”

While it's easy (and often right) to point to climate change when we see long-standing masses of ice fracture and break, it's worth noting that in this case, scientists don’t believe the warming planet is to blame. Instead, this appears to just be part of the natural cycle of an ice shelf, according to the BAS. As the National Snow and Ice Data Center notes, these large masses have a habit of breaking when they can no longer support themselves, creating icebergs that float off while the ice slowly rebuilds and the process starts over again.

What happens to this iceberg going forward may well be dictated by climate change, though. The planet's warming temperature has caused a significant amount of ice loss in recent years, and the resulting rising sea levels are expected to put hundreds of millions of people at risk.

More like this
The ocean is about to swallow a climate research facility, which feels fitting
By AJ Dellinger
What cities will be most affected by climate change?
By Vanessa Taylor
Biden's big Earth Day climate pledge did not impress everyone
By AJ Dellinger
Stay up to date