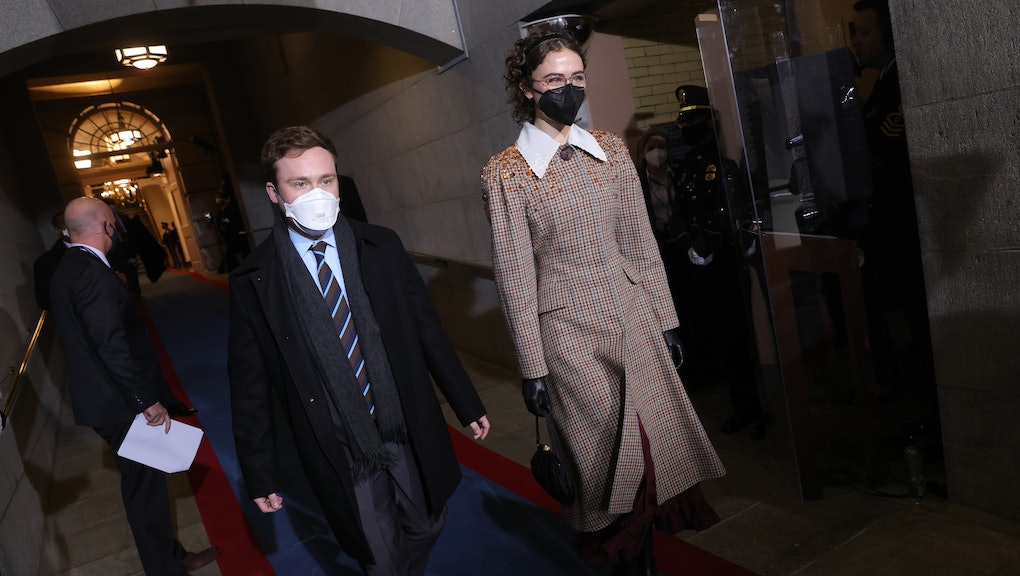 Was it the eyebrow waggle at Mike Pence that did it? Quite possibly! After stealing the show with her playful expression and bejeweled Miu Miu coat at the presidential inauguration, Ella Emhoff, the 21-year-old stepdaughter of Vice President Kamala Harris, has landed a major modeling contract with IMG. Agency president Ivan Bart told The New York Times that “Ella communicates this moment in time. There’s a cheekiness and a joy she exudes.”

Emhoff isn't the only young influencer minted by the swearing-in ceremony. IMG Models also signed Youth Poet Laureate Amanda Gorman, after her inaugural poem, “The Hill We Climb,” catapulted her to national fame. She's also been tapped to perform at the Super Bowl. After four years of frosty relations with the Trump administration (some designers refused to dress Melania Trump in protest of her husband’s politics), fashion seems to be rushing to embrace the Biden administration and those in its orbit.

Aside from her ties to the White House, Emhoff is a senior at New York’s Parsons School of Design, where she studies fine art with a focus on textiles. She weaves highlighter-hued knitwear that I like to think of as cottagecore for the rave. She's got "really weird tattoos and kind of a funky haircut" (her own words) and generally represents a bohemian cool departure from the prim image typically projected by political offspring. Emhoff told the Times that she's stoked “to bring a bit of Bushwick into the high fashion realm.”

“I’ve obviously got a bigger platform now, and I’m excited to share a lot of things I really care about, and do some good,” Emhoff said. She's looking to sell her knitwear to fundraise for worthy causes, such as Growls, a collective supporting Black transgender people. “There are a lot of people out there that need a lot of help,” she said. “If I can do anything to help with that, I want to, and I think this opportunity will be really beneficial toward that.”