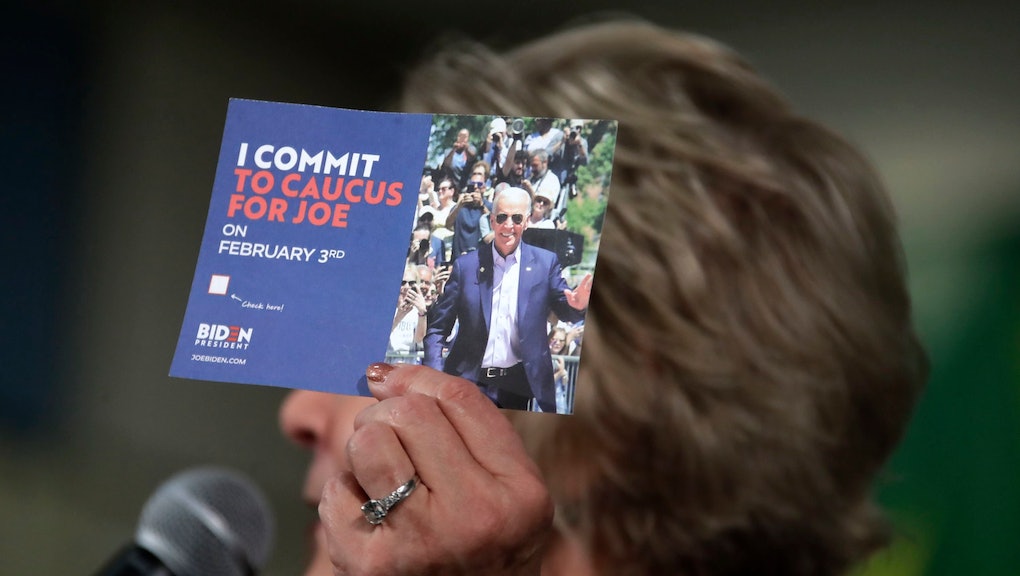 Iowa may be the first state to participate in presidential elections, and it’s undeniably one of the most important, but it’s definitely not the most normal. In fact, the Hawkeye state is about as quirky as they come, at least in regard to its nominating procedure. Because it’s the first, though — this year's caucuses will take place Monday — it tends to have an outsize impact on how momentum develops in the race. Candidates who win the Iowa caucuses can slingshot past their rivals, as undecided voters are drawn towards the glow of victory. But the caucuses can also, due to their peculiarity, produce wonky results and lift up candidates who go on to crushing defeat later on in the primaries. Just ask former Arkansas Gov. Mike Huckabee in 2008, or former Pennsylvania Sen. Rick Santorum in 2012. The system can reward candidates who don’t appeal to large swathes of the electorate in other states. The downstream effects of this weirdness are currently playing out in the 2020 Democratic primary, as candidates jockey for position in the first real weeks of the presidential race.

To understand what makes Iowa so distinct, you have to start with one key fact: Iowa is a caucus state, one of just six such states remaining, following rule changes made by the Democratic National Committee last year to discourage states from hosting caucuses. Caucuses — public meetings where voters declare their support for one candidate or another — usually reward candidates with the most engaged, informed voters. These tend to be the voters supporting candidates outside of the mainstream, who draw on grassroots support rather than rely on establishment backing. It’s how Texas Sen. Ted Cruz and Donald Trump managed to take the top two slots in 2016, and how Bernie Sanders, the self-avowed socialist senator from Vermont, came within 1 percentage point of Hillary Clinton in 2016. Sanders outperformed Clinton in multiple caucus states, even as she romped in states with standard primary voting.

The reason is simple: Caucuses aren’t easy to participate in. They take a long time, sometimes hours, and require participants to publicly disclose who they are voting for. They are strange exercises in civic participation, in which people gather in gyms, churches, and schools and move into the specific corner of the room assigned to their candidate to indicate their support. After the initial round of voting, the people in each corner are counted, and candidates without 15% of the total are removed from voting.

Sometimes they can turn rancorous, like the 2016 Nevada Democratic caucus, when chairs were allegedly thrown after Sanders supporters claimed the process was being rigged. They also only take place at one specific time — unlike normal voting, which is available all day, and sometimes via absentee or early ballots — which can discourage people who aren’t willing or able to take time off to participate. Caucuses also don’t take place at people’s normal voting locations, adding a layer of friction to the process. As a result, the most ideologically motivated votes tend to participate in caucuses, because they feel strongest about supporting their candidate — and these people often support candidates outside the moderate mainstream.

This can mean that demographics that don’t normally dramatically sway politics can have a big impact. Under a new Iowa law passed last year, 17-year-olds can participate in the caucuses as long as they will be 18 by the time of the general election. According to Teen Vogue, enthusiasm among teens is sky-high in the lead-up to the caucuses, as candidates have appeared at local high schools to seek their support. In the last year, per Teen Vogue, 5,000 17-year-olds have reportedly registered to vote in Iowa. In a state where margins are often razor thin, this could have a substantial impact on the result. People still in high school are more likely than those with jobs to have the free time necessary to participate in caucuses; seeing as young people also support Sanders and Massachusetts Sen. Elizabeth Warren by a large margin, this could give the two progressives an edge in the state.

Perhaps in response to the perceived strength of the more left-wing candidates in Iowa, former Vice President Joe Biden recently asked Minnesota Sen. Amy Klobuchar if she’d consider teaming up with him in the caucuses. The two are the mainstream moderates left in the race, alongside Pete Buttigieg, the former mayor of South Bend, Indiana. According to several reports, three Biden staffers reached out to Klobuchar’s team to inquire about whether, on the night of the caucus, they might encourage their supporters to vote for the other candidate in districts where one candidate wasn’t likely to reach the 15% benchmark required to advance past the first round. This isn’t unprecedented — Democrats Dennis Kucinich and John Edwards came to a similar arrangement in 2004.

Klobuchar’s team declined. “Our campaign is on the rise,” communications director Tim Hogan told The New York Times. “We’ve never made caucus deals with other campaigns and don’t intend to.”

Weird deal propositions like this are a symptom of Iowa’s wild caucuses, which reward voter enthusiasm over raw vote totals. Take a look at the Real Clear Politics polling average of the Iowa race over time and you can see that four different candidates have been shown with a solid lead in the Hawkeye state. Most recently, it's Sanders who's on top.

On Monday, the Iowa caucuses will officially kick off the 2020 race. They may not exactly be the most democratic way to count votes in the strictest sense, but they definitely add a certain sense of mystery.

More like this
After a drone strike in Kabul killed 10 civilians, Democratic senators want Biden to scrap the practice
By Vanessa Taylor
Biden got the COVID booster shot and didn't even flinch
By Rafi Schwartz
Oops, the Arizona recount the MAGA crew demanded actually took votes away from Trump
By Rafi Schwartz
Stay up to date