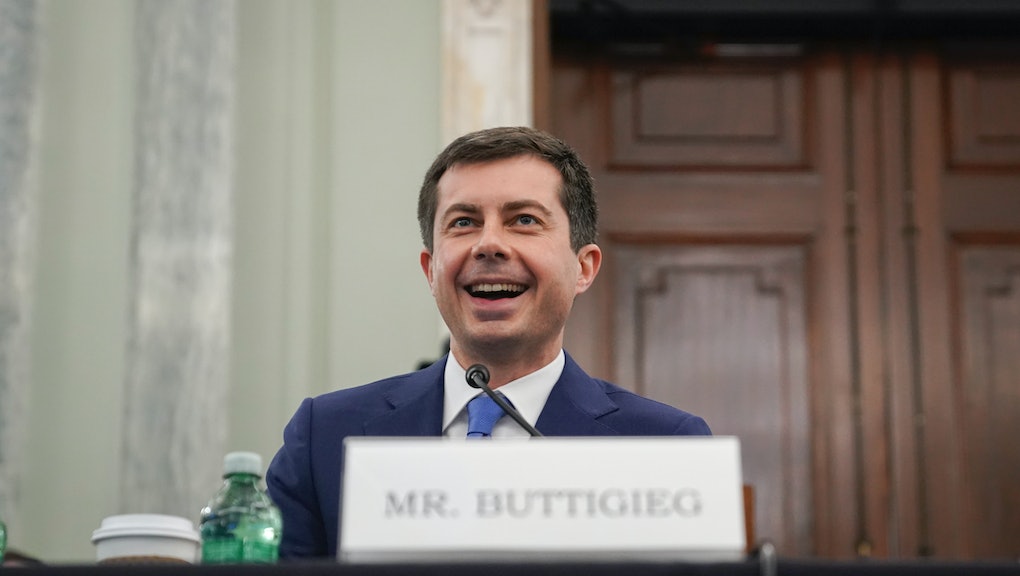 Is Pete Buttigieg the secret to Biden's climate agenda?

This week Pete Buttigieg, the former mayor of South Bend, Indiana, was confirmed by the Senate to serve as secretary of transportation, a job that will put him in charge of overseeing the entirety of American's infrastructure — and, quietly, make him one of the federal officials best positioned to address climate change. On paper, the fit is an odd one. Buttigieg’s executive experience is limited; as mayor of South Bend, a city of just over 100,000 people, he oversaw a staff of 1,143 employees with an annual budget of $358 million. As transportation secretary, he'll manage 55,000 employees and a budget of $87 billion.

But what he lacks in managerial experience, Buttigieg makes up for with big dreams. During his confirmation hearing, the former mayor made the case that climate change would be the Department of Transportation’s top priority under his leadership. He told Congress that before them was a “generational opportunity to transform and improve America’s infrastructure,” and that the Biden administration has an opportunity to do so in a way that could help mitigate the ongoing effects of climate change. In subsequent interviews, he’s made clear just how he would approach this shift in priorities: by expanding federal support for electric vehicles, ditching dirty burning fuel sources at every opportunity, and supporting public transit nationwide.

Buttigieg is right: The DOT has a huge effect on climate-related policy. Transportation is responsible for nearly 30% of all greenhouse gas emissions in the U.S., making it the largest single contributor to emissions. And based on his brief presidential run, Buttigieg certainly seems up to the challenge: On the campaign trail, he talked up a plan that he called "a bold and achievable Green New Deal” that would push the country to net-zero carbon emissions by 2050, would create 3 million new jobs, and would pour hundreds of billions of dollars into weaning the energy sector off of fossil fuel and switching to renewable options. (Notably, the plan was less ambitious than the goals outlined in the actual Green New Deal.)

And while he won’t be able to enact that agenda from the Oval Office, there’s still a lot he can do as a Cabinet secretary.

"[During] the Obama administration, DOT worked closely with the [Environmental Protection Agency] to strengthen fuel economy and tailpipe pollution standards for vehicles. It created a greenhouse gas performance metric to help ensure states using highway trust fund dollars tracked their emissions, and it made climate outcomes a priority criteria for discretionary grant programs," Ann Shikany, an infrastructure policy advocate at the Natural Resources Defense Council, tells Mic. The Trump administration undid the Obama-era fuel efficiency standards and a considerable number of other actions, but Buttigieg could attempt to reinstate them.

Of course, advocates are hoping for a more ambitious approach than just restoring the status quo. "Electrifying our vehicle fleet, from passenger cars to heavy-duty trucks and buses, and revitalizing and expanding public transit are significant, triple-win opportunities for the climate, the economy, and public health," Derek Walker, the vice president of U.S. climate policy at the Environmental Defense Fund, tells Mic. Walker says that simply building the infrastructure required to support electric vehicles more broadly would be a huge benefit to the country, both in creating jobs and reducing emissions.

The Biden administration has already taken a strong step by promising to overhaul the entire federal fleet of more than 650,000 vehicles, replacing them all with electric cars and trucks. Car manufacturers are following the new demand for electric, with General Motors announcing its goal to phase out all gas- and diesel-powered cars by 2035. Buttigieg’s DOT can make this transition easier by readying America’s roads for the influx of electric vehicles and massively expanding the availability of charging stations.

Electric cars, while better than their gas-guzzling counterparts, are still worse for the environment than public transit. An emphasis on expanding access to buses and rail for communities of color and other underserved populations would go a long way toward reducing the number of vehicles on the road, and thus the level of transportation-related emissions. To achieve this, Shikany recommends that Buttigieg shift the DOT’s priorities from highways and interstate transportation and instead think more local, prioritizing infrastructure projects like bike and pedestrian networks and converting bus fleets to electric.

Dan Raudebaugh, the executive director at the Center for Transportation and the Environment, points to the Low or No Emission Vehicle Program (Low-No) at the Federal Transit Administration (FTA) as a shining example of how the federal government can help usher in cleaner transit. “This program provides funding to transit agencies to pay the difference between the costs of zero-emission buses and fossil fuel-powered buses,” Raudebaugh explains. “It also pays for the infrastructure necessary to support zero-emission buses and for the technical assistance necessary to support transit agencies with their transition to the new technology.” Raudebaugh said the DOT was instrumental in launching the program back in 2012 — and that the FTA would require Buttigieg’s support to continue its work.

Raudebaugh also sees an opportunity for Buttigieg to address the scourge of heavy freight vehicles, which are disproportionately bad for the environment. "Focusing on decarbonizing the medium and heavy-duty vehicle sectors would be a meaningful top priority," he says, noting that more than 25% of transportation-related emissions come from heavy vehicles that make up less than 5% percent of vehicles on the road. Because these vehicles usually follow predictable routes and stop at the same fueling and maintenance facilities, Raudebaugh says, this sector of transportation would be particularly well-suited for a speedy transition to zero emissions.

Predictably, those who worked with Buttigieg in South Bend say he is plenty equipped for his new job. And arguably, his biggest accomplishment as mayor was an infrastructure project. When Buttigieg took office in 2012, he took over what Newsweek declared to be a "dying city”: South Bend's population had been shrinking for a decade, the city was deprived of youth, and its downtown area was in a state of decay. In 2013, then-Mayor Buttigieg implemented the first step of a 20-year plan called the Smart Streets initiative, which promised to reinvigorate South Bend’s downtown area.

Jitin Kain, the current deputy director of the Department of Public Works in South Bend, served as director of planning under Buttigieg during the launch of Smart Streets. Kain tells Mic that the mayor was "an inspirational leader who fostered a collaborative and creative work environment within city government." He describes Buttigieg as engaged, regularly asking for "data, research, and best practices before making decisions on projects or large initiatives."

Smart Streets was part of a larger restructuring and reorganizing of South Bend. Jesse Stires, an engineer and former project management intern who worked on the project, says the project included building new roadway drainage infrastructure, installing roundabouts, and converting one-way streets into two-way streets to encourage traffic and mobility — the sort of local tinkering that could be crucial to making America’s cities more friendly to greener transport. Meanwhile, Kain, who coordinated logistics between local agencies and the Indiana Department of Transportation, notes that other, smaller parts of the Smart Streets project were no less meaningful: "In downtown, the enhancements included new curbs and sidewalks, protected bike lanes, landscaping, and lighting, all of which have drastically improved pedestrian and bicyclist experience."

Those who have worked with Buttigieg feel confident that his experience will translate to the federal government. "Mayor Pete took the challenges of a rust-belt Midwestern city head-on," Kain says, noting that he expects Buttigieg to take a "collaborative, bipartisan approach to federal projects." Stires highlights the fact that Smart Streets was adapted specifically for the needs of South Bend, and says "I think this same type of design and thinking can be accomplished for the needs at the federal level."

But Buttigieg has plenty of other skeptics watching his work. Experts like Railway Age reporter David Peter Alan, noted that Buttigieg’s plan to modernize South Bend left behind people who rely on public transit. The city has a very limited bus schedule that fails to serve large swaths of South Bend, particularly the areas where many Black community members reside. Buttigieg has been criticized by activists for failing to serve these populations, favoring instead wealthier and whiter parts of the city — a problem exacerbated by his equally spotty record on retaining Black members of law enforcement and addressing the concerns of marginalized communities broadly.

Inequitable transportation practices, dating back to the nation’s earliest interstate projects that displaced low-income households and people of color, have already put communities of color at a major disadvantage. Buttigieg’s track record suggests that he failed to prioritize these communities when reshaping South Bend. If he repeats that mistake at the federal level, it would be disastrous — morally and environmentally.

Then there is the issue of outside influence. In 2019, the Center for Public Integrity published an in-depth report detailing the many lobbyists and industry interests who backed Buttigieg’s mayoral and eventual presidential campaign. The organization found that in multiple cases, Buttigieg’s financial backers wound up receiving contracts to work on city-funded projects throughout South Bend, including bids related to Smart Streets. That should worry anyone who feels Buttigieg’s rapid ascent in politics reflects a willingness to say and do what’s necessary to please the right powerful people.

The U.S. and the world are thick in the middle of a climate crisis. Addressing it will require ambition and innovation. Buttigieg displayed his capability for both as mayor of South Bend. He may not be uniquely skilled, under normal circumstances, to run a sprawling federal agency — but these are not normal circumstances, and he may just be uniquely skilled enough to run this particular version of the Department of Transportation.

More like this
Biden's new office to fight for environmental justice already faces an uphill battle
By AJ Dellinger
How the shock and confusion of 9/11 enabled our modern conspiracy era
By AJ Dellinger
Animals are "shape-shifting," and scientists think climate change is to blame
By AJ Dellinger
Stay up to date