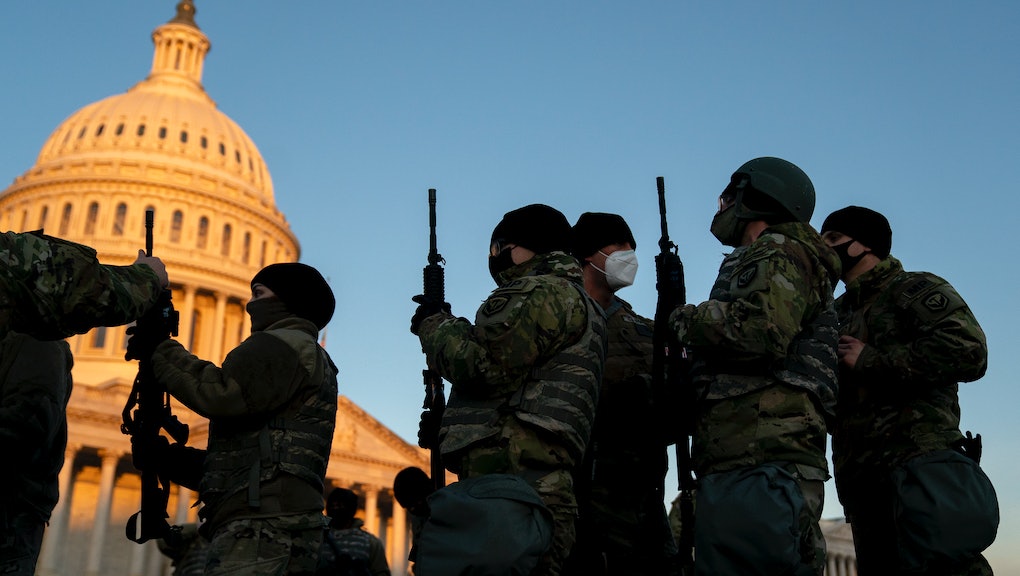 Is the Biden inauguration safe? D.C. is locking down amid reports of planned violence

The U.S. Capitol is supposed to be one of the most secure buildings, second maybe only to the White House, in one of the most secure cities in the country. In less than one week, the country's political elite will convene at the steps of the Capitol to watch the inauguration of President-elect Joe Biden. It's an important ceremonial moment, but gathering everyone in the same place — especially after last week's insurrection — is undoubtedly a massive security risk.

After white supremacists galloped through the halls of Congress on Jan. 6, Biden gave a somber speech referring to the event as an "insurrection" and calling on President Trump to discourage his fetid supporters. As Biden left the stage, a reporter asked, "Are you concerned about your inauguration, sir?" Biden responded: "I am not concerned about my safety, security, or the inauguration."

Well good, that makes one of us. Because after Wednesday's attack on the Capitol, it seems that most everyone else is on high alert. Even as more and more details come into view around the premeditation of the Capitol siege, Biden has maintained that he wants to take the oath of office outside.

Obviously, the safest way to host an inauguration is to host it behind closed doors, in private, preferably in a secure location. Inauguration ceremonies are practices in imagery, and there's nothing that legally binds the president to being sworn in on the steps of the Capitol. The only thing that absolutely has to happen in order for someone to be sworn in as president is that they take the oath of office, and that can happen anywhere. Take, for example, President Lyndon B. Johnson, who took the oath of office aboard Air Force One on Nov. 22, 1963, after the assassination of John F. Kennedy. In 1945, President Franklin D. Roosevelt took the oath of office at the White House, and just three months later, President Harry Truman followed suit by taking the oath of office in the Cabinet Room. The oath of office has actually been taken seven times outside of Washington, D.C, which means that Biden could also be sworn in from his home in Delaware. Government, while a maze of bureaucracy, is designed to respond to current events, and an inauguration should be no different.

To be fair, some might say Biden's inauguration has already been extremely pared down to meet safety needs in accordance with COVID-19 mitigation efforts. The ceremony will be nearly 80% online, with only few thousand people attending in person, as opposed to the usual 200,000, per The Guardian. Each member of Congress will get a ticket for themselves and one other person, but no members of public will be allowed.

But we're no longer just talking about the security risk of coronavirus. White supremacy is the major threat at hand. Washington, D.C. is fully militarizing itself against the many reports of planned pro-Trump-demonstrations in the weekend leading up to the inauguration as well as a reports of a planned violent white supremacist insurrection on Jan. 20 itself. The U.S. Secret Service is working with a number of federal agencies to secure the district; per Business Insider, "The U.S. military will have a larger footprint in the nation's capital by this weekend than the total number of troops in Afghanistan and Iraq combined."

Additionally, as HuffPost reported earlier this week, the National Guard is "establishing rules of engagement for warfare." Maryland's National Guard is sending in 1,000 troops of its own. And the military has already gotten to work, putting up an 8-foot fence around the Capitol Building, which is likely a response to how easily terrorists broke through the police barricade last Wednesday.

The descent of thousands of military troops, police, Secret Service agents, and other tactical officers on the nation's capital is a harrowing protective measure against further attacks on the Capitol, as well as a response to the many credible threats on the lives of members of Congress. On Monday, Capitol Police briefed federal legislators on plans the agency had uncovered that involved Trump-supporting terrorists attacking and murdering Democratic leaders, HuffPost reported.

Security officials involved in the planning of preventative measures ahead of next week's inauguration are facing the test of their careers. Per The Washington Post, "Veteran Secret Service and Homeland Security officials who spoke on the condition of anonymity to share their worries described a level of concern unlike anything in their careers. Threats they fear include a plot by armed groups to encircle the White House or the U.S. Capitol and the inauguration event, as well as the possibility that gunmen could stage coordinated attacks against less-fortified targets in the city."

So instead of running the risk of leaving some "targets" less fortified than others, police and security agencies are beefing up military presence nearly everywhere in the District. As one unnamed Secret Service official told the Post, "Everyone can just rest assured they are throwing the kitchen sink at this event." Another official said the kitchen sink items include "radiation protection. Bomb detectors. Amtrak sweeps. All the security personnel — they’re all now in place."

Still, there's concern that police officers and military members might be sympathetic to, or in some cases even co-conspirators with, white supremacists and their documented efforts to instigate armed violence in Trump's name. The chief of staff for Rep. Ayanna Pressley (D-Mass.) said that the panic buttons in Pressley's Capitol Hill office had been inexplicably torn out ahead of Wednesday's insurrection, and multiple sources have confirmed that off-duty police officers took part in the terrorist siege of the Capitol. Sen. Tammy Duckworth (D-Ill.) asked the Pentagon to investigate the possibility that former military took part as well, a call that feels increasingly urgent given the fact that at least some troops dispatched to the capital are likely aligned with pro-police causes.

Politico reported Thursday that a rehearsal for Biden's inauguration scheduled for Sunday was postponed to Monday due to security concerns. Authorities did not elaborate as to what exactly the concerns were, but Biden's planned Amtrak trip to D.C. from Delaware on Monday was also canceled. CNN also reported this week that in battleground states like Pennsylvania and Georgia, whose votes for Biden were crucial in delivering him the presidency, local law enforcement agencies are also bracing for pro-Trump protests.

Over the weekend, the Associated Press reported that the FBI was individually vetting the 25,000 National Guard members expected to be in D.C. to secure the event. The effort was undertaken because "U.S. defense officials say they are worried about an insider attack," AP reported. Typically, there are only about 10,000 National Guard troops on hand for an inauguration, but the increased presence is a response to the increased security threat from pro-Trump mobs. Guard members themselves received training on how to identify "insider threats," Army Secretary Ryan McCarthy told AP.

The Pentagon said Monday that there is "no intelligence indicating an insider threat," per CNN. But on Tuesday, AP reported that two National Guard troops had been removed from the Biden inauguration because it was discovered that had ties to fringe far-right militias. The robust vetting measures coupled with reports of pro-Trump actions planned make Wednesday's inauguration much more than a ceremonial affair — it's now a full-fledged national security operation.

This article was originally published on Jan. 16, 2021

More like this
Ronald Reagan's would-be assassin is about to get a full, unconditional release
By Rafi Schwartz
Oops, the Arizona recount the MAGA crew demanded actually took votes away from Trump
By Rafi Schwartz
I hope Marjorie Taylor Greene never logs off
By Rafi Schwartz
Stay up to date